Britain’s new youth champion: ‘I want to cut everyone’

The British county of Kent appointed a new youth commissioner -- who turns out was acting like a bit of a youth on Twitter. The scandal is a top tabloid fodder across the nation.

Here is hilariously modern Britain in one hit. A few days ago, Kent appointed a new police and youf commissioner, who was a … youf. Seventeen-year-old Paris Brown was presented to the meeja as the new face of inclusive Britain, part of the process by which ordinary folk would now be running the cops in the name of the people. Brown presented as a self-possessed and focused young person, perhaps even one of those tiresome prefect/youth parliament types.

Until her Twitter feed was revealed that is, and it turned out she was, well, see for yourself … 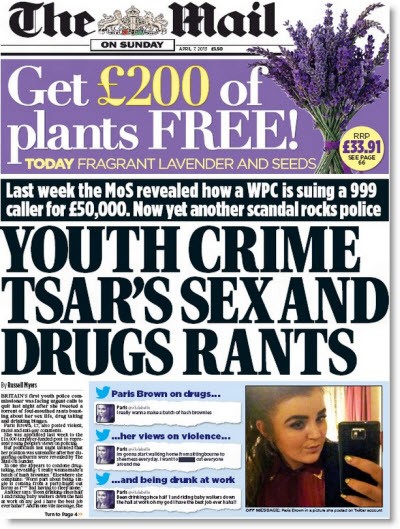 The new youth crime advocate was a “foulmouthed, racist homophobe” screamed the Daily Mail, which knows about these things. That was a bit of a beat-up. With the exception of one anti-Roma people tweet:

Which I’m afraid made me laugh out loud. And a sadly accurate piece of TV criticism:

“Everyone on Made In Chelsea looks like a f-king fag”

The rest was standard: misuse of s-xual descriptors as a generic term for lame (“faggots played knock dwn ginger at my house 3 times last night”), some reflections on multiculturalism (“F****** hell why are the people from Direct Pizza so difficult to talk too!! IT IS CALLED ENGLISH. LEARN IT.”), the health system (“I’m on so many prescribed pills atm its beautiful…feel so so lightheaded”), young person problems (“Worst part about being single is coming home horny as f-ck and having too sleep alone BADTIMES”) and, true to her new job, justice issues (“I dont condone violence but Im so pleased that my brother thumped the fat little c-nt that gave his tiny little friend a black eye”) [sic passim].

Once these tweets were revealed by the Mail, and quickly deleted by “vilulabelle” (“beehivemullettenightmaregirl” presumably having been already taken), all hell broke loose. Brown was defended on the grounds that what you do when younger shouldn’t be held against you. Which is true, unless you’re 17 and “younger” was 16 — and the commissioner who appointed her said “I wasn’t recruiting an angel”, thus sending umpteen C&W songwriters to the studio with an idea.

So far, so crazy, but then it took a distinctly British turn with the Kent police she was supposed to be the boss of investigating her for possible breaches of the law for some of her tweets. Although whether this was for her thoughts on urban living (“Right either there are Owls outside my house or my neighbors dont know how to f-ck quietly”) or her haiku (“I want to f-king cut everyone around me”) is not specified. By today it was impossible for her to continue, even though she confirmed that she was not “a homophobic” in a press conference with more glottal stops than the slow train to Thames Estuary.

Her law and order career is finished; doubtless her VJ debut is a mere few days away. She is not much better or worse than your average gobby teen; only a terminally confused society could first create a tokenistic youf commissioner, and then threaten to prosecute her for being such.

Given the times, it is difficult not to see her as Thatcher’s child, in Blair’s Britain.

Want more from Crikey’s incomparable writer-at-large Guy Rundle? Sign up for a free trial to read his essays on the death of Margaret Thatcher, the North Korea nuclear threat, the UK welfare state and more from around the world …

This is like an extended Odd Spot section, and my day is better for it

What a success this lady is, i wish we had a youth rep who could free our old fogies of their genteel pretensions.

I hadn’t heard “Pikey” before. I shall now try to forget it.

Ok, this woman has kicked one out on the full, but why do I like her anyway?

As for the “Pikey’s ” they could at least return the railway track..rofl!