Another pointer for Murdoch on racism ... this dog really did fly ... Jehovah's Witnesses still on the beat in ACT ...

Racism ping. Crikey was intrigued when Rupert Murdoch recently took a stance against racism. “I think the way they’re talking about the 457 [visas] is disgraceful and racist,” he said last week, in relation to Labor’s comments on skilled immigration. This prompted us to delve through the archives to bring you a “best of” guide to racist coverage in Rupert’s News Limited papers. Thanks to the reader who submitted this daybill from The Australian — apologies that it’s a bit blurry. All we can say is — yes, Rupert, racism is disgraceful. 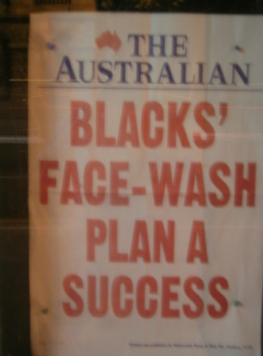 Rupert is currently touring his Australian operations, and we were surprised to hear from a source at a major metro there had been no special requests for coverage on particular issues, which is apparently what normally happens. Seems that this visit has been more low-key, and he’s spent more time chatting to people on the newsroom floor than usual. If you’ve got a any gossip on the Murdoch visit, sing out.

IT geeks assemble. As Crikey goes to print, Tony Abbott and Malcolm Turnbull are spruiking their NBN policy from a high-tech set in the bowels of a building to a gaggle of excited IT journos. Does anyone think Turnbull looks a little underwhelmed to be standing next to Abbott? (Mind you, some in the Crikey bunker are wondering if either or both are holograms.) It’s certainly a far cry from the Coalition’s pre-2010 election announcement of its broadband policy, when a nervous Tony Smith struggled to get his point across. At the Turnbull / Abbott gig, a journo with a strong resemblance to the Daily Telegraph’s Joe Hildebrand, bedecked in a multi-coloured waistcoat, just asked a question. Joe, it that you?

Doggone. Yesterday Crikey brought you the incredible tale of the Sunday Herald Sun’s flying dog. Incredible because it was in no way correct. That prompted a reader to tell us this tale of a dog that apparently did take to the air …

“Many years ago a dog named Charley mysteriously disappeared from his footpath home in Bangkok, and reappeared some days later at a well known outdoor café/bar haunt of Qantas stewards in Athens. He lived there happily for many years and daily greeted the stopover Qantas crew with affection , and indeed, with some familiarity.”

Twit? Crikey has brought you a little gossip on a Twitter exchange between Melbourne identities Jane Stevens and Herald Sun executive fashion editor Kim Wilson, complaining about how facilities for the disabled can really slow down the traffic. A tipster pointed out Stevens is national sales manager for Parker Healthcare, which manufactures items used in “Hospital Intensive Care, Anaesthesia and Neonatal sections of the healthcare industry”. Some sympathy for the physically challenged might be in order here …?

Doorknockers. We’ve been interested in whether the age of doorknocking (see: Jehovah’s Witnesses) is a thing of the past. Yesterday we learned it’s still a thing in Queensland, and today we have this update from the mean streets of Canberra:

“I live in an apartment in Lyneham, ACT and have been doorknocked by the local JWs a couple of times (a weekend morning maybe once every six months. More bizarre was time a private citizen came around selling door-to-door art (paintings/drawings he appeared to have done himself. Not bad, but not really what I was looking for).”

That “Twit?”? Just because they’re your major customer, doesn’t mean you need respect or empathise with them, does it?
Look outback – at the liquor industry?