Derryn Hinch is facing more charges after breaking a suppression order against the killer of Jill Meagher. Plus, the death of the Iron Lady.

Lesson from Logan in how to be a spinner. Back in late June 2011, five asylum seekers at the Northern Immigration Detention sewed their lips together in protest over their rejected claims for refugee status. A few days later, more instances of self-harm and protests occurred at the Darwin facility. Yet in two media reports about the incidents — one by the ABC and the other AAP copy published in The Sydney Morning Herald — the chief spinner for the Department of Immigration, Sandi Logan, denied that the five had sewn their lips together.

However, a freedom of information request by the Darwin Asylum Seeker Support and Advocacy Network shows Logan and other officials at the Department of Immigration knew about the five men sewing their mouths shut, as they were receiving email updates about the men. 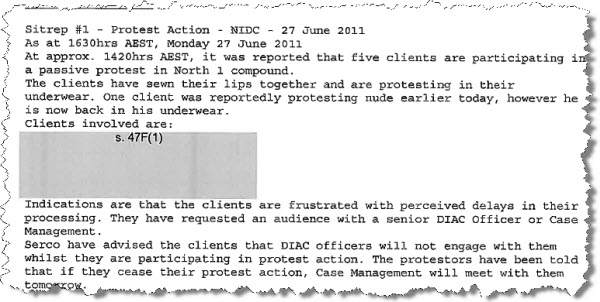 Logan received an update about the five men — three Iranians, one Iraqi national and a Kurd — on June 29. A journalist first made contact with Logan and questioned him about lip sewing and a roof protest on June 30. So why did Logan deny that lip sewing had occurred? Because by then the lip sewing incident had finished and Logan is too clever to give away additional information to journalists who are asking only specifically about a current protest.

“Our response was in answer to the questions from journalists about the protest on the roof and the answers to the questions from the journalists about the protests on the roof were entirely accurate,” Logan told Crikey. “In response to the specific question about ‘is there any lip sewing’, the answer was given ‘no, there are no incidents of lip sewing’, and we were talking specifically about incidents on a rooftop that occurred some days after the previous action by five clients.”

But isn’t that a bit tricky, since obviously the journalists were asking about the lip sewing incident as well? “I don’t do the journalists’ job. They would scream blue murder if I was to start to pretend that I was doing their job,” said Logan. “They do their job, they ask me questions, I give them answers. And I give them accurate answers.” If Logan gives any classes in how to spin news and manipulate the media, we’re signing up. — Amber Jamieson

Hinch in court again. This morning, Melbourne radio station 3AW broke the news former employee Derryn Hinch will be heading back to court:

Supreme Court Justice Geoffrey Nettle said this morning Hinch had appeared to have breached the suppression order surrounding the Adrian Bayley case. Nettle’s strict ruling, put in place on Friday, only allowed journalists to report that Bayley had pleaded guilty to one count of murder and one count of r-pe. However, Hinch went a bit further than that, posting this blog post on Friday, which went into the details surrounding the case.

This is Hinch’s third appearance in court over controversial public comments, and his second for breaching a suppression order. In 2011 he was sentenced to five months’ home detention after publicly naming two s-x offenders whose identity had been suppressed.

Songs that celebrate the Iron Lady’s death. With the scandal-hit Socialist Workers Party in the Brixton High Street popping champagne corks to commemorate Baroness Thatcher’s death, Crikey pondered the soundtrack to their reverie.

First up has to be Morrissey with Margaret on the Guillotine from his 1988 debut solo album Viva Hate (“the kind people have a wonderful dream, Margaret on the guillotine”). And what about the penultimate track on Darren Hayman vehicle Hefner’s 2000 LP We Love the City, The Day that Thatcher Dies (“We will laugh, the day that Thatcher dies/even though we know it’s not right/we will dance and sing all night”). Or even Elvis Costello’s mournful Tramp the Dirt Down from 1988’s Spike (“Because there’s one thing I know, I’d like to live/Long enough to savour/That’s when they finally put you in the ground/I’ll stand on your grave and tramp the dirt down”). — Andrew Crook (read the full story here)

Video(s) of the day. First up, last night during Q&A‘s all-female panel the news broke that the UK’s first female prime minister was dead. Check out the panel’s initial reactions to the news, from wanting to pop champagne to Germaine Greer’s offering her sympathies to Thatcher’s treatment by her political colleagues. 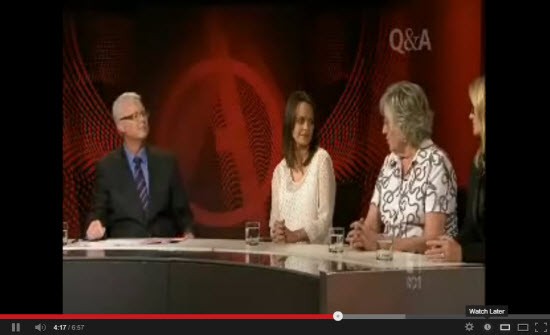 Plus, here’s a snippet from that classic interview by George Negus with the Iron Lady in 1981. When Negus told Thatcher ordinary Britons had called her “pigheaded”, she illustrated her toughness by demanding more details: “You tell me, who, where and when”. 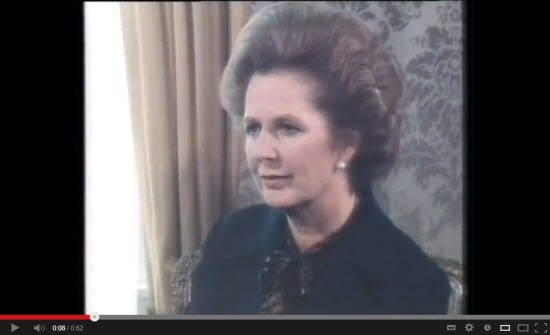