Comedian holds balance of power in Italy, but no one’s laughing

Eight million Italians used their votes to send a message to the major parties by voting for comedian Beppe Grillo. But no one expected he would win. Rome-based journalist Josephine McKenna asks Italians: what now? 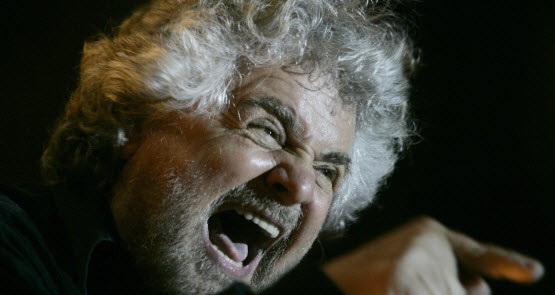 Antonio voted for the first time in 15 years when Italy held national elections in February. A Rome taxi driver, he used to support the Left. This time he cast his ballot for Beppe Grillo, the maverick comedian whose Five Star Movement (M5S) walked away with around 25% of the vote and sent the country’s political establishment into a tailspin.

“I voted for Grillo, but I never thought he would win such a big share of the vote,” Antonio said. He is one of some 8 million Italians who used their votes to say enough is enough to politicians from established parties, whom they believed were more concerned with lining their own pockets than solving the country’s vast economic and social problems.

Grillo’s movement now holds the balance of power in the Senate, effectively blocking Pier Luigi Bersani and his centre-Left Democratic Party which won a majority in the lower house. Grillo refuses to forge a coalition with Bersani, and the Democratic Party leader has no desire to seek a compromise with his centre-Right opponent, former prime minister Silvio Berlusconi.

The prospect of a hung Parliament has left the country without an effective government to take over from technocrat prime minister Mario Monti, and for weeks Italians have been subjected to a raging political debate with no end in sight. In a country where the economy is going backwards — 1 million people were sacked last year, and GDP is expected to drop by 0.5% in 2013 — young people are fleeing the country in their thousands. Talking seems to be the only growth industry.

“Almost all my friends and relatives voted for Grillo and now they are wondering what they did,” one man told me in a store filled with mediaeval etchings near the Vatican. He and the owner were passing the afternoon arguing about what should be done to resolve the political impasse. “The only thing that saves us is our sense of humour.”

At the Quirinale Palace, President Giorgio Napolitano has been holding talks with bickering political leaders in what he recently called a “surreal” end to his seven-year presidency due to end in May. The highly respected statesman even appointed 10 experts — known as the “wise men” — charged with proposing electoral and economic reforms for the uncompromising parties to endorse. But Italians say they are just adding to the meaningless talking.

In an editorial published in the daily Corriere Della Sera on Sunday, Luciano Fontana wrote:

“Let’s imagine for a moment living in a country with a serious political class worried about the difficulties that have tormented us now for a very long time. Instead a month and half has passed since that election and nothing has happened. We are in the midst of an Italian farce.”

Grillo, who built his political base through interactive, online democracy, prefers to communicate with his supporters via the web and has taken to dressing in hooded ski jackets and sunglasses to avoid the media camped outside his home in Genoa. He has proposed restructuring Italy’s 2000 billion euro public debt, and his vague policies include a proposed referendum on the euro. But he is adamant his group wants no kind of pact with either Bersani or Berlusconi’s People of Freedom Party.

James Walston, professor of international relations at American University, describes Grillo’s success as a “revolution”. “Grillo and the M5S are in difficulty because of their success,” Walston said. “They either go for the least bad option [the Democratic Party] and lose the revolutionary charge, or they hold out against any of the old parties and risk increasing the effects of the economic crisis.”

While the Parliament will hold a special assembly on April 18 to elect a new president, fresh elections seem inevitable in Italy — perhaps as early as June. And fasten your seatbelts, as “bunga bunga king” Berlusconi may emerge as the frontrunner after promising to abolish the tax on primary residences and end public spending for political parties. The billionaire media mogul, who has dominated the political landscape for two decades, may be fighting a tax fraud conviction and charges he paid for s-x with an underage prostitute called Ruby the Heartstealer. But Ruby, whose real name is Karima El- Mahroug, staged her own media sideshow outside the Milan court this week and demanded a fair hearing. “I am not a pr-stitute,” a tearful Ruby told the media pack. “I have nothing to be ashamed of and nothing to hide.”

The one candidate who could galvanise the protest vote is Bersani’s internal rival Matteo Renzi, the 38-year-old telegenic mayor of Florence who has wasted no time in making fun of Grillo and electrified the talkshow circuit with his energy and enthusiasm. He could yet prove to be the biggest winner of Italy’s electoral race this year.

Politics is a joke – why not make it official?