MPs in a hearing on medical marijuana have been caught out on Facebook. They say they were paying attention, but is it all a smokescreen? Freelance journalist Serkan Ozturk finds out. 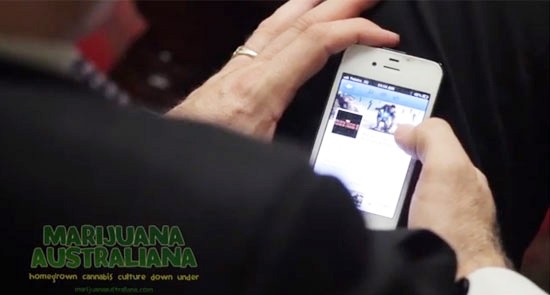 Two New South Wales MPs on a committee investigating whether cannabis should be approved for medical use have been caught out whiling away their time on Facebook during public hearings.

Crikey has obtained footage showing upper house Labor MPs Adam Searle and Amanda Fazio using their smartphones to message friends, look at memes and jokes and join Facebook groups during a March 11 public hearing of the use of cannabis for medical purposes inquiry. The footage was taken by filmmaker Richard Baron, who is filming a feature-length documentary, Marijuana Australiana, on cannabis use in Australia.

“I was shocked to notice the conduct of various parliamentarians on the committee,” Baron told Crikey. “Several were using their phones quite frequently during the course of the hearing and from the screens I could glimpse, none of their activities were Parliament or work-related. In particular, Adam Searle spent a great deal of time facebooking wildly … I witnessed him looking at the page for the latest Iron Man movie and scrolling through seemingly endless ‘e-card’ memes.”

Baron says the use of social media reminds him of “schoolkids mucking around in class”.

In the footage Searle can be seen viewing popular memes at such a blinding rate his fast fingers would surely be the envy of any teenager. The opposition’s small business spokesman — who has come under criticism as a “part-time MP” for augmenting his $160,000 annual pay packet by working as a barrister — also appears to look at a group for novelists in Australia.

When first questioned by Crikey about the claims, Fazio admitted she was using her BlackBerry but denied she was on Facebook during the hearing. “I’m not a frequent user of Facebook,” Fazio said. “When I do it’s usually when I’m at home. I don’t use Facebook when I’m at inquiries as that’s just not the way I operate. I responded to a text or two and I also responded to some emails, but that’s the extent of it.”

After being told there was video footage that seemed to contradict her remarks, Fazio changed her tune, saying after checking her Facebook account “it appears I did use it once at around 2.20pm”.

“This of course doesn’t mean that I wasn’t paying attention to the proceedings,” she said. “Like most other people, politicians must be able to multi-task. Please be assured that I am not in the habit of not paying attention to witnesses and believe that I play a constructive and productive role in the inquiries I participate in.”

Searle admits he was using Facebook on the day but only “to provide updates on the evidence” that was being taken by the committee. Searle rejects suggestions his social media use is inappropriate or excessive. “This, however, did not result in me not listening and taking in the evidence that was before the committee,” he said.

The NSW Legislative Council inquiry into the medical use of marijuana will table its final report on May 17.

Small and regional publishers press for a say on Facebook, Google code

Par for the course of behaviour standards. Pictures of federal LOTO asleep, for the entirety of Aboriginal submissions to Parliament when he was shadow minister.

What a bloody joke. Do you people not know how to multitask?

I can facebook whilst watching a film, and still tell you what was just said. And I’m 20 years away from being a teenager.

Just another example of the old media simply not getting new media.

(even though you’re online Crikey, you’re still full of stiff old bastards who don’t know jack about the modern world)

What a beat-up! I was one of the ‘experts’ giving evidence before the committee on the 11th (I am the National Campaign Director for the HEMP Party Australia).

So Crikey (via Mr Baron) has decided that some of the committee members checking their FaceBook during dead-air periods is a demonstration that they were not paying attention?

Amanda Fazio and Mr Searle were both engaged, interested, and knowledgeable questioners.

While some of the evidence presented to the committee was brilliant and engaging (mine for example)a great deal of the testimony (mainly from some of the ‘anti-cannabis’ crusaders) was truly and astonishingly boring and misplaced. In fact – I would challenge anyone with a working brain to stay engaged near the end of an eight hour series of hearings while a group like the ‘National Cannabis Prevention and Information Centre’ drone on with their ‘cannabis will cause your budgie to go blind’ tripe. It is almost inhumanely sleep-inducing!

If committee members were checking their FaceBook accounts – it might be honestly described as a form of mental self-defense!

Some of the people in the hearing were reduced to stabbing themselves in the leg with pens in an effort to stay awake (or determine that they were not already asleep and dreaming).

At times I kept getting up and walking out to survey the pictures of the ex-premiers of NSW which lined the entrance foyer as this was fascinating in comparison to what was happening in front of the committee.

I also note that Crikey decided that these hearings were simply not worth reporting on at the time and so little or no coverage was provided, and then this sort of sniping and ill-informed material appears a few weeks later via a third party (obviously with little or no consideration of the motives of the individual providing you with the ‘scoop’).

As I understand it Mr Baron (the film-maker) shopped this non-story around to every one of the people who were in the room on the day and was subsequently barred from filming the second day of the hearings because of his unprofessional behavior.

And if you want to report trivialities you are doing your readers a total disservice. For example: on the same day I managed to get the word ‘green-out’ into the Hansard. Which is at least as significant an event as the one reported on in this article. Or, as a last resort, Crikey might even provide some consideration to the material the committee was considering? (Just a thought.)

The word ‘green-out’ in Hansard (the appropriate paragraph quoted).
In fact: there is certainly an actual news-story buried somewhere in just this one paragraph!
“What harm would be caused by this leakage [from the legal cannabis market to the illegal market]? You could put a tonne of cannabis in a room, put a sign out the front saying “All you can eat, line up here,” and you could have people coming in until that tonne is eaten and there will not be an individual who is harmed by it. There might be a few belly-aches, there would be a few green-outs, but no-one would be physical[ly] harmed by it. We seem to be spending a lot of time worrying about Chinese walls and barriers to protect against something that can cause absolutely no harm. The crafting of appropriate regulations will always have to take into account for the HEMP Party that elephant in the room — the fact that cannabis is harmless. In medical terms it is harmless. All of the other drugs that you are talking about here, OxyContin, et cetera, if there is a leakage, yes, people die. When there is a leakage with cannabis nothing happens. Absolutely nothing. No harm to the society will be visited.”

Jim, the politicians are paid to listen in Hearings and they are paid very well! No matter if the topic is boring as hell, there is an onus on a Parliamentary Committee to listen to submissions.
If all you can take from this as a highlight is the adding of a new word, “green out”, into Hansard, I worry that much is being overlooked here.
I saw the video and I was shocked. There is simply no excuse for politicians behaving in this manner!