There's plenty of fodder from News Limited over the weekend -- not the least the flying dog that wasn't. Plus other media gossip.

Logies scooped — again. Outside of a North Korean military parade, you’ll struggle to find a show as tightly choreographed and stagemanaged as the Logies. But for the second year in a row the Gold Logie winner has been leaked ahead of time, this year by The Australian. Renowned leaker of political polls, Twitter account @ghostwhovotes, was the first to point out The Australian’s mistake:

He linked to a picture of the piece and the actual article, which has since been taken down. To make matters worse, the original article was then republished across other News Ltd websites, apparently automatically. Clive Mathieson, editor of The Australian, told Crikey that the leak was the result of a technical problem. “We had an embargoed copy of the winners, a long standing practice, and through a production error, a human error, it was accidentally published on the internet,” he said. He added that he has called the Logies’ organisers to apologise.

This isn’t the first time a big media organization has leaked on the Logies. Last year the Herald Sun published that Hamish Blake had taken home the coveted Gold Logie two hours before he actually won. They also blamed a technical hitch and apologised for the mistake. At the time ACP Magazines spokesman Peter Holder, organisers of the Logies, made morose comments about the new age of journalism: “It’s a good lesson learnt and for us to stop expecting a return in goodwill. The concept of the embargoed results is now a thing of the past.”

Given last night’s events, it seems he has been proven right again. — Crikey intern Ben Westcott

The Hun‘s dog of a yarn. Melbourne’s Sunday Herald Sun left nothing in the locker room over the weekend with its front-page splash on what it called the “mystery of a flying dog”: 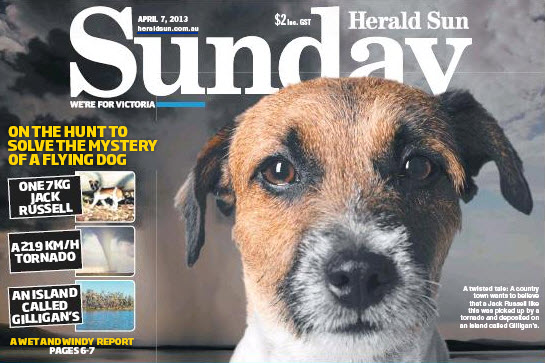 In a two-page spread, the Hun revealed that a Jack Russell had shown up on a small island in Lake Mulwala, near the town of Bundalong. The local pub, readers learned, was swirling with rumours the dog had been carried by a 200+km per hour tornado; a Bureau of Meteorology tornado expert was even called in to speculate on Toto’s travels. Vox pops from the local pub, an infographic showing the path of the tornado and a break-out box on “other weird animal claims” accompanied the story. It’s a safe bet visiting News Corp boss Rupert Murdoch would have loved it; he’s a famous fan of animal stories.

Unfortunately, as the Hun explains in a postage stamp-sized follow up today, the yarn had more bark than bite.

The “twister terrier”, it turns out, did not fly, but rather was left behind by his owners who were on a boat trip. Who’da a thunk it? — Matthew Knott 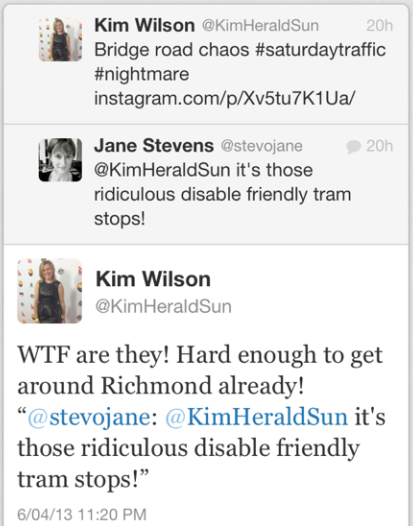 Wilson concurred in a reply sledging the super stops’ purpose: “WTF are they! Hard enough to get around Richmond already”. The physically challenged can go jump, apparently. — Andrew Crook

Financial Review on Sunday (on TV). The Australian Financial Review has confirmed its television venture, with Financial Review Sunday to launch next month on the Nine Network. The 30-minute report, hosted by ex-Ten reader Deborah Knight, will air at 10am — directly up against Alan Kohler’s Inside Business on ABC1. According to the press release:

“Backed by the credibility and resources of Fairfax and Nine, Financial Review Sunday will attract a high-calibre of panellists, including new faces to cut through the rhetoric and provide expert commentary.”

That will include journos from The Age and The Sydney Morning Herald, too, as part of Fairfax’s new organisation structure. As The AFR reports:

“Financial Review Group CEO Brett Clegg also flagged the likelihood of BusinessDay commentators from The Age and The Sydney Morning Herald, including Malcolm Maiden, Elizabeth Knight and Adele Ferguson, contributing to the series after his expanded remit to head business coverage across all Fairfax Media’s key multi-platform mastheads takes effect.”

Some of those reporters appear with Kohler on the ABC — will there be a turf war for business talent? Nine’s show is expected to air live — unlike Kohler’s which pre-records on Fridays.

The service is only available for public health/health policy conferences with some public interest merit, given concerns about premature reporting of preliminary findings from scientific and clinical conferences and about private-sector conferences. Conference organisers pay for the time and costs of a journalist (or someone with appropriate skills and expertise) to attend the conference and to provide articles for Croakey, as well as tweet-reporting. They also contribute to the Croakey moderator’s time in organising and editing coverage. — Melissa Sweet (read the full story at Croakey)

What good is a media empire if you can’t use it to your own amusement?

How readily the two ladies display their ‘disable’ brains.

Re: the tram stops on Bridge Road, I’m all for making PT more accessible but from a drivers perspective they are a nightmare. It’s like you are driving through a loading dock with one lane elevated and the other lane tram tracks. Passengers clearly don’t realise it’s still the road (they wander out as the tram approaches) and drivers don’t know if they are meant to follow the tram or go up the ramp and run down the pedestrians wandering onto the road.