Khmer Rouge tribunal resumes — but will they live long enough?

Cambodia's beleaguered Khmer Rouge tribunal resumes today. But the wheels of justice are turning slowly -- and defendants are dying before it comes. Kevin Ponniah reports from Phnom Penh. 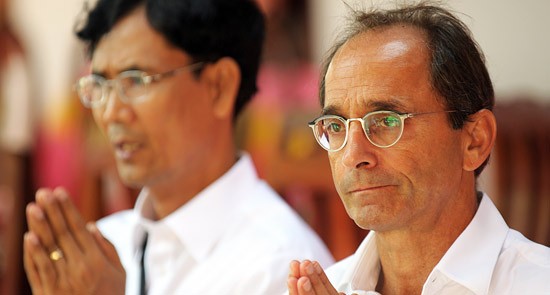 Cambodia’s beleaguered Khmer Rouge tribunal is facing a more pressing problem than the government obstruction, staff walk-outs and funding shortfalls that have plagued its seven-year history: the relentless march of time.

In other words, the defendants are dying.

He is said to have been responsible for convincing hundreds of sympathetic Cambodian intellectuals living abroad to come home to “help” their country, before they were jailed, tortured or executed on their return as part of the intellectual purge, one of many measures designed to take Cambodia back to “Year Zero”. Having lived out his final days in a leafy Phnom Penh villa and been worshipped as a hero until the end in the former Khmer Rouge strongholds of Cambodia’s far-flung western provinces, Ieng Sary’s mid-trial death is a grave setback for a court that likely only has two elderly defendants remaining.

“I think [the age of the defendants] has become more real and is starting to hit home since Ieng Sary passed away,” Ou Virak, director for the Cambodian Centre for Human Rights, told Crikey. “People are starting to think that the death of other defendants is imminent. For me, one of the remaining two will probably escape justice. That seems more and more likely now.”

It has been 38 years since Khmer Rouge guerillas marched into Phnom Penh in 1975, overthrowing a US-backed regime and forcibly relocating more than a million people into the countryside to join their ultra-Maoist agrarian utopia. An estimated 1.7 million Cambodians died in the next four years from overwork, disease, starvation and executions, until the Vietnamese invaded in 1979.

Labelled as the most complex and ambitious international war crimes trial since Nuremberg, the tribunal — known as the Extraordinary Chambers of the Courts of Cambodia — was set up in 2006 to seek justice on behalf of the Cambodian people. Problem is, the war criminals are now so elderly and infirm, and the scope of the trial so small, that only a handful of people will ever be convicted. Pol Pot himself died unceremoniously in the jungle in 1998.

Since its establishment, the tribunal has produced just one conviction: Kaing Guek Eav, alias Comrade Duch, the commandant of Phnom Penh’s notorious Toul Sleng prison, where he oversaw the deaths of up to 15,000. Duch was sentenced to 35 years in 2010, a sentence that was changed to life imprisonment in 2012 after appeals.

With Ieng Sary’s death, the civil parties who had hoped for justice must now live with the fact that their tormentor sat in the dock but was never found guilty. It’s a hard pill to swallow for victims who jubilantly celebrated his arrest in 2007, more than a decade after he led a mass Khmer Rouge defection to the ruling government and was granted amnesty for his crimes.

Many now see the UN-backed tribunal as dragging its feet to the finish line in a race against time.

Sary’s wife, Ieng Thirith, who was the Khmer Rouge social affairs minister, was deemed unfit for trial last September due to a degenerative illness believed to be Alzheimer’s disease. The remaining two defendants in Case 002 are Khieu Samphan, 81, the former head of state and Nuon Chea, 86, “Brother Number Two” to Pol Pot’s number one, Khmer Rouge chief ideologist, and the most senior surviving member of the regime.

Chea was pronounced fit for trial on March 29, just two weeks after Sary died. But with the remaining pair both sickly octogenarians, and a judgment expected only to be given next year, the fear is real that the court will only ever deliver one verdict. “I think the whole tribunal is running the risk of spending about $200 million and a lot of time and effort to only convict one man: Duch,” said Virak.

But some observers warn that simply expediting the trial to obtain the maximum number of verdicts will diminish its legacy and enduring meaning for Cambodia. “Yes, it has to be sped up, but at the same time the procedure must be respected,” Youk Chhang, director of the Documentation Center of Cambodia, told Crikey. “That’s the whole point of any court of law. I would not want the trial to speed up and have to compromise the law or the evidence, that is important for the country.”

His centre researches and documents Khmer Rouge atrocities and has provided over half a million documents to the court — almost 80% of the case files.

For Chhang, the legacy and historical record of the trial is just as significant as the verdicts obtained — and thus the legal process must be respected. “What I hope for is a legacy that genocide should be and can be prevented and is the responsibility of all parties. Not only the country where it occurs but the international community … that should be the message for all of us,” he said.

Analysts say the court has benefited little from a Cambodian government that requested the trial from the United Nations as a symbolic gesture, but does not truly want to investigate or prosecute a large number of war criminals. Brad Adams, Asia director at Human Rights Watch, said in a statement after Sary’s death:

“Cambodian Prime Minister Hun Sen asked the United Nations in 1997 for assistance in holding Khmer Rouge leaders accountable — and since then has done everything in his power to stymie the tribunal’s work. Hun Sen bears primary responsibility for denying justice to the victims of Ieng Sary’s atrocities.”

From the start, the Cambodian government insisted the tribunal be held in Cambodian courts and only allowed five top-ranking individuals to be indicted in cases 001 and 002. The two other ongoing cases, 003 and 004, involve other supposedly high-ranking cadres and have been the subject of much controversy in their investigation.

In 2011, Siegfried Blunk, a German international co-investigating judge at the trial, resigned, citing political interference from the Cambodian government. Blunk and his Cambodian counterpart were severely criticised by Human Rights Watch at the time for failing “to conduct genuine, impartial and effective investigations” into cases 003 and 004. Several other international judges have quit the trial for the same reasons.

“The UN and donors have to address the heart of the problem: that the Cambodian government is trying to control who this court investigates and prosecutes,” Claire Duffy, tribunal monitor from the Open Society Justice Initiative, said last year after Blunk’s replacement, a Swiss co-investigator, also resigned.

Prime Minister Hun Sen — himself a former mid-level Khmer Rouge commander — has stated he would rather have the trial fail than to expand the number of suspects beyond the five big-name indictees in cases 001 and 002. He expressed these sentiments directly to UN Secretary General Ban Ki-moon in 2010.

“The Cambodian government makes sure the investigation will never go too deep,” Virak said. “That’s because doing so will lead to the officials in power now.”

The Australian government has so far donated almost $20 million to the trial, making it the second-largest country donor, after Japan.

In reality, the court is likely to end with only a maximum of three convictions, though its significance shouldn’t solely be measured in numbers. The enduring legacy of a tribunal that indicted and at least tried to convict five of the most senior living Khmer Rouge war criminals could mean something to the Cambodian people. Still, the reputation of the United Nations has been severely damaged by what many see as a lengthy, costly debacle of international justice in a country that simply wants to move on.

But the wheels are turning again. Last weekend the UN agreed to pay overdue salaries to local staff, avoiding a large planned strike. Hearings are scheduled to start again today. Two more verdicts, while far from ideal, could at this point be partially redemptive.

“I don’t think it can deliver justice now for the Cambodian people but at the very least it can deliver some partial justice. Bring some sort of closure,” Virak said. “The one thing that all of us victims want is to know that the UN is doing all it can to bring justice and to push the trial through.”

*Kevin Ponniah is a print, online and radio journalist currently based in Phnom Penh