Fairfax journalist Paddy Manning fears the incursion of The Australian Financial Review in The Sydney Morning Herald and The Age. He writes scathingly of his employer for Crikey.

Today’s rubbishy “First Person” sponsored editorial in The Australian Financial Review is a perfect example of why the business sections of The Sydney Morning Herald and The Age should not be merged with the Financial Review Group — a decision announced by Fairfax last week.

Brought to you by the Commonwealth Bank, it features a rambling interview (plus vision!) with former Business Council president Graham Bradley, who calls for a wave of deregulation by the incoming Abbott government. Bradley declares over the past five years “we’ve not had a government in Canberra that’s been truly respectful of business, interested in business and supportive of business generally”. 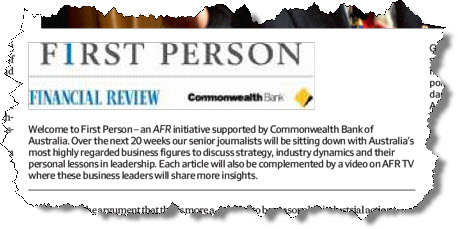 Such creeping advertorial — touted as commercially necessary but also fundamentally ideological in its inevitable pro-business slant — has been noticeable in BusinessDay for at least a year: witness the introduction of saleable sections like Executive Style, My Small Business and IT Pro, as well as the use of outside columnists like mortgage broker Mark Bouris, former fund manager Matthew Kidman and even the return of media buyer Harold Mitchell.

The result has been to cramp space for news, features and the opinions and analysis of BusinessDay‘s own reporters and columnists, who are guided by a code of ethics and have no vested interests to push.

The BusinessDay masthead was pinched from The New York Times but has gradually united the business teams of the Herald and Age, has gelled online and is now head and shoulders above any Australian rival in terms of readership, attracting more than two million unique readers a month.

BusinessDay is built on the legacy of reporters and editors like Ian Verrender, Michael West, Adele Ferguson, Ian McIlwraith, Elisabeth Sexton, Stuart Washington and countless lesser-known names who have built up a culture of investigative reporting — holding business accountable — and broken stories that matter not just for business but for the public at large.

BusinessDay writes for the consumer, not for industry. We are not the trade press. With exceptions like Neil Chenoweth that nevertheless prove the rule, The AFR‘s business journalism is built on a fundamental contract between company and reporter: high-level access in exchange for soft coverage.

Too often — even for many of its own hard-pressed reporters’ liking — the result is PR-driven “churnalism” which shows up as “drops” (the poor man’s exclusive, or as Verrender once wrote, the press release a day early), “herograms” for business leaders, unreadable roundtables and conference-linked spreads featuring plenty of happy snaps of business leaders with a glass of champagne or mineral water in hand.

The result also has been a predictable skew on vital topics like climate change and industrial relations.

It is reporting with fear and favour. And you know what? Nobody reads it. Educated readers — The AFR‘s demographic — hate it. Ultimately, even advertisers shun it. It’s a business model for business journalism that had been tried at both The AFR and The Australian. It doesn’t work.

Business readers are not fools. Very often they know more about a given story than the journalist. They want the facts, balance and genuinely independent analysis and commentary. Tell it like it is.

Management of Fairfax Media including Greg Hywood have assured us that politics, business and sport are the heart of its newsroom. The transfer of BusinessDay into The AFR tramples on the legacy of quality, independent, consumer- and reader-driven business journalism established at The SMH and The Age. Both papers will be much poorer for it.

*Paddy Manning is a BusinessDay reporter and former national chief of staff for the section. He has worked at The Australian Financial Review and The Australian.

And that Paddy me boy, is precisely why you are no longer with AFR or Fairfax and one of the main reasons why life is starting to breath thru all the Fairfax mastheads. It has taken a near death experience at the hands of incompetent zealot ex-journalists like you for Fairfax to finally purge itself of it’s poison pills. I have actually subscribed to AFR, as have many others recently, it is “heaven forbid” an interesting, informative & balanced newspaper … again!

Clegg and Stutch have done wonders with their innovations. Paddy should get with the program.

@cammo the author is a Fairfax journalist.

Ellen, Stutch is the Australian journo who claimed way back in the beginning that the BER was $7 billion over budget before one building was allocated.

It came in $1.5 billion under budget over all.

I’ve stopped reading AFR (and I get it for free!) because of the very thing that is described in this article. “Press Release a day early” sums it up pretty well. Now this isn’t the fault of the current management team as it’s been happening for several years but if they actually want to reverse the downward trend in circulation they should take note as just cutting costs isn’t going to fix Fairfax.