Julia Gillard is on her second trip to China as PM. There are tentative signs of the relationship improving, but a key topic behind the scenes is how to address Australia's uncertainty over China. Our correspondent is in Bo'ao. 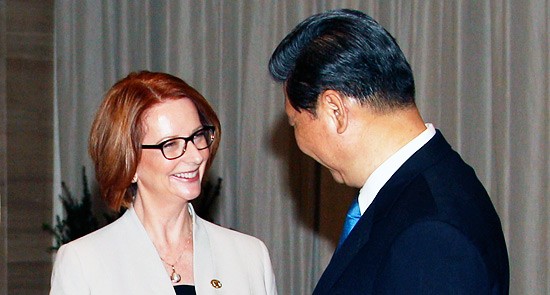 In their wisdom, Canberra’s powers-that-be decided to designate the unusually heavyweight Bo’ao Forum, a logistical nightmare of an event held on the tropical Chinese island of Hainan, as the centrepiece of Julia Gillard’s second trip to China as prime minister.

The forum is named for the one-time fishing village that now resembles a seaside version of the infamous inner-Mongolian ghost city of Ordos. There is a five-star conference hotel nestled among verdant golf links and further out, miles of empty apartment blocks. Hainan’s property bubble has been one of China’s worst, and it has popped. The PM’s travelling party of officials and press gallery media stayed two hours away at the $500-a-night Hilton Resort in Sanya.

It’s been a big year at the clubby forum — the best stuff always happens in the bar (all day) or Andrew Forrest’s presidential suite — with more heads of state than usual. Rankings matter a great deal here; there is a very clear pecking order inside the Communist Party, where ranks mean almost everything. So you can only imagine the gnashing of the teeth when Gillard was ranked just 11 in the Bo’ao conference program. That’s one rung below New Zealand. (The China/New Zealand Free Trade Agreement inked in 2008 still rankles with Australia, which is now seven years into negotiations with no deal in sight.)

The latter was one of the four themes — along with trade/investment, defence and education — that Gillard outlined when she stepped off her plane into the sticky Sanya heat on Friday. The pattern for the weekend had been set: short press conferences away from the conference venue — and the occasional conversation-free photo op — to which media were bussed in and out. Speeches handed out ahead of delivery. No surprises or, God forbid, spontaneity. But the PM is having drinks tonight in Beijing …

At Gillard’s first press conference, Minister for Everything Craig Emerson appeared behind her, stage left, but there was no sign of Foreign Minister Bob Carr, one of the last grown-ups left in cabinet, who even at that early stage must have started to wonder why he was on the trip.

But the big-ticket item of her five-day trip was the weekend’s meeting with newly anointed Xi Jinping, who has quickly emerged as China’s strongest leader since Deng Xiaoping. Since stepping up as Communist Party chief last November, Xi has spoken plainly, announced a pogrom on official excesses and gifting (denting the hopes of luxury brands) as part of a broader crackdown on corruption. In doing this, as well as hewing to a more nationalistic line in his theme of the “Chinese dream/national rejuvenation”, he has revealed himself as Communist Party rarity: a natural and gifted retail politician.

But he will need all the tricks in the book to paper over the widening cracks in the “China model”. The new style was not in evidence at Bo’ao, as he delivered a by-the-numbers speech about regional co-operation. Gillard’s speech was another stab at being tough, and appeared aimed at a domestic audience. Given only six minutes, she opted to warn about worsening regional security — given this is mainly China’s, rather than North Korea’s fault, she may have played the wrong card. She managed to focus on climate change in a regional context and drew on Australia’s long relationship with China, but was shaded by New Zealand PM John Key, who sold his country like a pro.

“[Gillard] managed to focus on climate change in a regional context and drew on Australia’s long relationship with China, but was shaded by New Zealand PM John Key, who sold his country like a pro.”

Her meeting with Xi was more successful. The pair agreed to take the “relationship to a higher level”. Gillard was clearly taken with the apparently charming Chinese leader, describing him as having “intellectual and policy substance” with “a keen eye for the future” who has a “deep understanding of Australia”.

But there seems to be some problem with the new regular strategic dialogue Australia has been hankering after. Gillard seemed to say yesterday it would not happen yet; it’s too early in the Xi administration.

The paper then went on to say it would be at prime ministerial level — so Gillard and new Premier Li Keqiang rather than Xi. Perhaps that’s the problem. The Chinese are very strict on protocol and see Governor-General Quentin Bryce and Xi as heads of state. Gillard and Li are prime ministers. This is where the stumbling block seems to be. When quizzed on the Chinese story in Shanghai this morning, Gillard sidestepped the question and then positively snapped when quizzed again, refusing to engage any further. So already there seems to be trouble in paradise.

Still, to give Gillard’s office one thing, she can pull a crowd. From a situation last year when it was a struggle to find an Australian to talk to outside Andrew Forrest’s posse, this year Bo’ao was lousy with Aussies. There was the perennial Bob Hawke, one of the forum’s founders, who regaled folks at Forrest’s Saturday night cocktail party with a well-worn but well-told joke and a rousing sing-a-long of Waltzing Matilda. Also loitering around the conference have been former Liberal ministers Peter Costello (a speaker) and Alexander Downer (representing Gina Rinehart). Liberal Deputy Leader Julie Bishop worked the conference rooms and its main bar with practised ease, galled that Gillard used the conference to announce a wholesale lift of Bishop’s “reverse Columbo plan”.

“And people wonder why oppositions don’t release policy too far ahead of elections,” Bishop mused to Crikey. Gillard’s other initiative so far is another imitation, with “G’day China” to be rolled out as an Asian take on the successful “G’day USA”.

Still, for a trip to China aimed at building ties with the Chinese, Gillard has so far not spent much time with the locals. She has met Bo’ao convenor Zhou Wenzhong and Chinese attendees at a business meeting. Gillard also met with the conference’s bona fide rock star: IMF chief Christine Lagarde, who dazzled with her all-French chic.

But what, readers may be asking, of the first bloke Tim Mathieson? Spotted collecting flowers on the tarmac at Sanya on Friday, there was radio silence on his movements until lunchtime yesterday when an email titled: “Mr Mathieson’s program” arrived in journalists’ inboxes. In this missive it was revealed Mathieson would meet Xi’s superstar folk-singer wife Peng Liyuan to discuss anti-smoking strategies. By all accounts his men’s health campaigning had caught her eye. But in its wisdom the Prime Minister’s Office did not send a photographer. Could have been the pic of the trip …

An interesting article, thanks, but what’s with the comment:
‘Foreign Minister Bob Carr, one of the last grown-ups left in cabinet’? Bowen and Crean will be missed, I assume, but good riddance to Marn Ferguson who was an advocate for the fossil fuel industry; there still seem to be plenty of good people in cabinet.

Why do you publish this ill informed and bigoted rubbish. He demonstrates deep ignorance of inernational protocol, and Chinese understanding of how to order and manage inernational affairs in particular. He litters poorly informed prose with personal and ill-informed opinions. I do not subscribe to Crikey for this level of journalism. There is plenty in Murdoch and Fairfax if we ever wanted to read it.

Well said Walker Rae;
It is an illinformed surly piece of journalism, isn’t it ?

I think Sainsbury is angling for a job at one of Reprehensible Rupe’s rags.

The bias in the srticle is self evident. It should have the rider – I am a Liberal and hate Gillard and Labor