The federal government is giving a big Hollywood studio $21 million to film a remake of 20,000 Leagues Under the Sea in Australia. Is it money well spent? It does return, but not where it's needed. 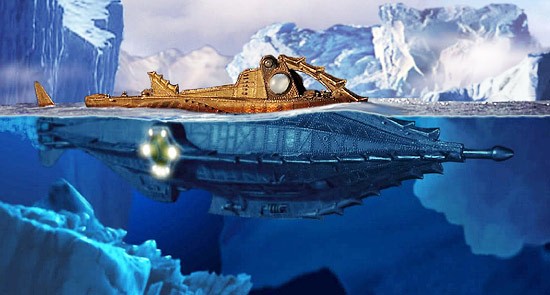 Most people enjoy a movie. But should the government pay for a local screen industry?

Since the early 1970s, the answer to that question has been “yes”. Before Phillip Adams and Barry Jones convinced John Gorton to start funding Australians to make movies, the majority of the television and essentially all of the movies consumed by Australians were made overseas. Australia has developed a significant local screen industry since, but it’s been highly dependent on government funding.

While successive governments, both conservative and Labor, have trumpeted the value of federal subsidies in creating a “sustainable” local industry, in truth the whole sector is heavily reliant of both regulations, such as local content quotas for television drama, and subsidies for film production, such as the production offset.

The best example of the unsustainability of Australian screen is the Film Finance Corporation, a government-owned film funding agency set up in 1988. Unlike Screen Australia and its predecessor, the Australian Film Commission, the FFC was supposedly set up along commercial lines — investing in profitable films and using the proceeds to plough back into the local industry.

It didn’t work. By the time the FFC was wound up in 2008 it had invested about $1.345 billion in local productions. It made back only $274 million, for an investment loss of more than $1 billion. As the old saying goes, a billion here, a billion there — pretty soon you’re talking about real money.

In many artforms, small government investments reap huge returns in artistic and social outcomes. But this investment is ultimately taxpayers’ money. As with all government spending, we all have a right to to ask whether that’s money well spent.

Labor backbencher Ed Husic made just that point this week, questioning the $21 million being spent on Hollywood feature 20,000 Leagues Under the Sea. The federal government is spending the money in order to lure a big overseas studio to produce the drama at Sydney’s Fox Studios. Husic publicly wondered whether the money would be better spent on an MRI machine for his local hospital in Sydney’s west.

So why is the government doing it? It’s not because new Arts Minister Tony Burke thinks it will be a great film — the justification for spending taxpayer dollars on foreign feature films is not artistic or cultural, it’s economic.

Do foreign features lured to our shores create jobs and economic activity? According to the Office for the Arts, yes.

In its 2011 review of screen production subsidies, the agency found foreign features brought significant economic benefit. The government claims The Wolverine, for instance, which received $12.8 million in funding, “created over 1750 jobs and contracted more than 1027 Australian companies, generated $80 million of investment and has reaffirmed Australia’s status as one of the world’s best filming destinations”. That’s an economic impact of around $6 for each dollar of taxpayers’ money spent.

Across the board, government investment, including direct grants and the producer offset, accounted for about two-fifths of the finance for feature film production in 2011-12. For foreign features and drama produced here, the amount of government support is lower. The majority of the finance, even for local features, came from overseas. Big Hollywood studios have no shortage of places to shoot; a big foreign film that shoots in Australia is almost certainly money that wouldn’t otherwise have made it into our economy.

So are subsidies to Hollywood really such a no-brainer? Maybe, maybe not. Amongst economists, there is surprisingly little support for production subsidies as stimulants of economic growth. In fact, many consider them a waste of money.

The benefits of foreign production are often over-stated, while the costs are glossed over. Big foreign features do catalyse economic activity, but it’s a footloose industry. When the subsidies stop Hollywood looks elsewhere — leaving local contractors all tooled up with no productions to work on. Inevitably, they either fold or move overseas to follow the work. It’s the familiar boom-and-bust cycle in foreign production levels well known to Australian crew.

The high Aussie dollar drove away foreign studios. As the mining boom forced the value of the dollar up, the expense of shooting here soared. Hollywood went looking for cheaper locations.

And there’s no shortage of those. In the United States, there is strong competition by individual states to lure big productions to various state jurisdictions. The leader has been Louisiana, which has employed huge production subsidies and tax offsets to try and bring in screen production activity. Many other states and countries have followed.

The problem is, the money spent on these tax subsidies doesn’t necessarily pay for itself in extra taxes or greater economic activity. As an independent report from the Centre for Budget and Policy Priorities found in 2010, state film subsidies simply “don’t work” — they largely subsidise non-residents to fill temporary jobs that dry up when the production finishes. Worse, as more jurisdictions compete with more generous film subsidies, local governments find themselves in a race to the bottom. Alaska and Michigan now offer subsidies that equate to 42 and 44 cents in the dollar. As the report’s author Robert Tannenwald writes: “Given the economics of film production, states will have to give movie-makers generous subsidies indefinitely in order to ‘stay in the game’.”

That’s exactly what’s happening in Australia. With The Wolverine trumpeted as a success, Disney was able to pressure the government to offer a similar subsidy to bring 20,000 Leagues to Australia. Most of the production will shoot at Fox Studios in the eastern suburbs of Sydney, not a part of Australia currently suffering from economic distress. And that $21 million is money that won’t finance local film-makers — or an MRI machine for Husic’s electorate.

Lord of the ka-ching: why governments prop up the film industry

I know a bloke who runs a truck company for film locations. He can afford to give local productions big discounts when he’s paid properly by the international productions. Surely there must be other examples of this happening and proves that these productions are not in isolation and have good knock-on affects for the local sector.

$21M to have the film done at Fox Studios.

Why does Australia have to spend $20m funding Hollywood and Disney, when that money could by 10 MRI’s machines for hospitals around Australia. I agree with Labor’s Ed Husic.

I like to assert that creative markets, like music, theatre, film, television, radio and politics, are audience driven. Commercial producers and broadcasters have access to useful audience data. Much of this data is simply a count of bums on seats within demographics: the who; what; where; when; and how much. In the long term, extrapolating the ‘why’ doesn’t matter that much. Trial and error over time develop a feel for trends and genres. I have seen more bottom-line success achieved by following audiences than by leading them.

These days film marketers and distributors are becoming more aggressive in their approach. They are experiencing a lack of growth which may herald a major downturn. The Internet, home and mobile computing are the challenging the media status quo. In recent times, games are on the increase, movies are static and music has declined.

The Australian film industry has been in a steady state over the last decade or so (figure 1). Gross national film production budget (of the core slate) range between $70-100M pa (Screen Australia 2009). In the last five years the number of film produced in range between 29 and 41 (EAO 2009). Audience figures are fairly static at about 85 million admissions per year (EAO 2009) each paying about $11 each. In the last few years there has been a significant increase in gross box office takings driven mostly by increased ticket prices (EAO).

Currently, 85% of Australia’s $875M (on average) movie going audience see an American film (EAO 2009). Only about 4% see an fully Australian movie. That comprises a $35M box office return on a $100M investment. Some of the shortfall is made up in tax breaks for investors and post box office sales, DVD, Television and such like.

The lack of attendance at Australian films can be attributed to the business model of the distributors. They adopt a US model because they are mostly owned and/or controlled by US interests who supply the bulk of available product. The current model is focused around the blockbuster and avoiding showing films in empty theatres. Unless a film become a blockbuster it is not shown for long in movie theatres.

These tactics may be good for scraping the barrel in hard times but seem to me to be detrimental to the Australian national film industry. Short runs in theatres do not allow Australian film to build or maintain a following. The rise of the megaplex theatres at the demise of the small theatres, which operate at lower turnover, consign Australian film to short token runs in megaplexes.

I presume that the long term promotion of the Australian film industry is not a priority for local distributors given it represents only 4% of their market. That successive Australian governments have allowed our local distribution industry to be controlled directly or indirectly by Hollywood is at the core of the stagnation of the Australian film industry. We have proven repeatedly that we have the talent to entertain the world and ourselves.

We are making good films that few get to see until shown on television. Last week the Sunday Herald newspaper sold me two recent Australian movies on DVD for $6. Thank you very much. Now I keep an eye out for DVDs in my breakfast cereal. We need to give Australian movies a suitable shelf life. I suggest that a healthy ‘second division’ of small theatres could economically provide a feeder for slow rising blockbusters, allow movie going Australians to reacquire a taste for Australian product and serve as a hot bed for new emergent interactive media that we ‘know’ are coming, assuming of course, if Hollywood doesn’t mind.

Not a lot of WATER at Fox Studios, last I checked…