Your morning tea with John Howard and Albrechtsen ... where is Rebekah Brooks? ... newspaper chiefs and their high salaries ...

White with one, thanks. Interested in morning tea with former PM John Howard, Opposition Leader Tony Abbott, conservative shock jock Alan Jones and Oz columnist Janet Albrechtsen? Then you’re in luck! The IPA is holding a gala dinner in Melbourne tonight with Rupert Murdoch as keynote speaker, and the morning tea is up for auction. Crikey would love to put in a bid, but sadly there’s no room for us at the ball — tickets are sold out and the IPA rejected our request to attend and cover Murdoch’s speech. So Cinderella Crikey will be sweeping the steps outside. 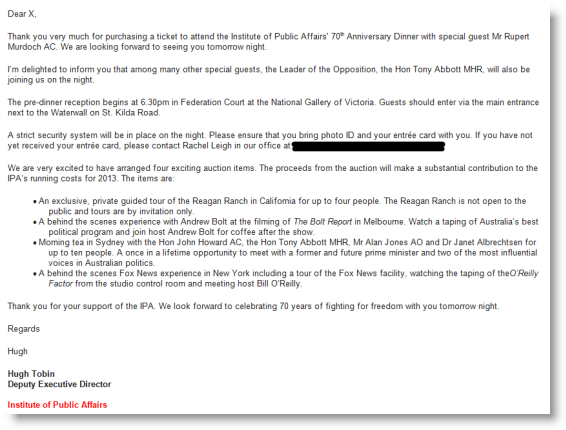 The big do will be held at Melbourne’s National Gallery of Victoria. This exhibition is currently showing — perfect for Rupert Murdoch. 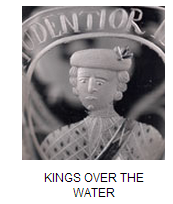 If you’re lucky enough to be attending tonight, do drop us a line tomorrow morning to tell us how it goes. And we’re also wondering: what happened to former News of the World editor Rebekah Brooks’ holiday to Australia? She was supposed to be here over Easter — any sightings?

Fat cats in super defence. Wondering why the big newspapers are flogging the current round of possible super changes hard and finding anyone willing to criticise them? Well, there’s the usual grubby explanation for the hysteria — blatant self-interest. A bird or two in a couple of leading papers points out the various newspaper editors and their bosses all earn over $300,000 a year (as do many of the high-profile columnists fulminating against the mooted changes) and as a result would lose their fat super subsidies if the changes happen. AFR people say it was for a similar reason that previous editor Glenn Burge ran so hard against a crackdown on employee share scheme tax rules in the 2009 budget. It made the front page 10 days in a row. Are we seeing a repeat of a self-interested attack, particularly at the AFR, where there are quite a few fat cats on $300,000-plus a year?

Diddling the newspaper figures. Newspapers have a proud record of dodgy tricks to artificially inflate their circulation to boost ad revenue. Is this WA tipster on the money about News Limited’s The Sunday Times?

“In their audit figures they recently conducted some ‘event sales’ where they claimed 20,000 copies — only 5000 of these left the print site to the event. Purely a way to prop up the audit figure. I wonder if senior News Limited management know of this and turn a blind eye. I challenge the audit bureau to investigate, advertisers should feel ripped off.”

Naming troubles. Seems not everyone is happy with the feds renaming the NDIS:

“FaHCSIA (Department of Families, Housing, Community Services and Indigenous Affairs) recently announced that the new NDIS (National Disability Insurance Scheme) will henceforth be known as ‘DisabilityCare’. This name has received a bit of criticism around the traps as being patronising, stigmatising etc. Even some of FaHCSIA’s own employees who have a disability, or are involved in disability issues, expressed dissatisfaction with the new name when an official email went round announcing it.”

If News Limited are “diddling” circulation figures. That would be prima facie evidence of a fraud on all its advertisers. Crikey has exposed this sort of thing years ago reporting pallets of bundles of newspapers never read but stored in some university somewhere in Melbourne I think. But more importantly there was a class action by advertisers in the United States. Which resulted in a ruling in favor of advertisers. The court awarded an enormous amount perhaps hundreds of millions be repaid to very unhappy advertisers.
Could News limited really be shonks? Just asking Edward James

Whereas in the movies it’s usually followed by a cigarette.

[Interested in morning tea with former PM John Howard, Opposition Leader Tony Abbott, conservative shock jock Alan Jones and Oz columnist Janet Albrechtsen?]
No. But luckily with Mr. Rabbit attending, you know where all his ideas are going to come from.

…… you really want in to “Rupert’s Right Ball”?

“Farks-ya” is worried about another name?