Croc horror, Murdoch’s in town. Crikey is indebted to Rupert Murdoch’s Tumblr for keeping tabs on his Australian visit (dressed in a natty check jacket, he toured the NT News yesterday, taking a look at the printing presses, addressing journos and talking social media policy). Heir apparent and fellow Aussie Robert Thomson was by his side — he’s to the right in this pic: 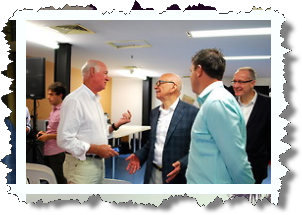 And News Limited CEO Kim Williams couldn’t be happier than by Murdoch’s side, as the NT News demonstrates with this page 4 story today: 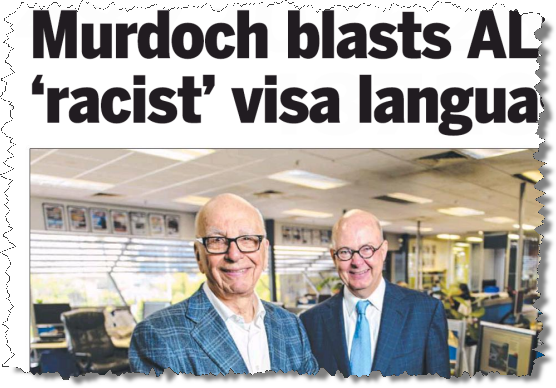 Murdoch was disappointed with his Darwin trip, posting this on his Tumblr: “Nice to be with our NT News Colleagues at the office this morning.  I was sorry, however, not to have time to see any of the famous crocodiles in the area.”

The NT News certainly took its famed croc coverage to new heights; this story from yesterday focuses on the fact that there were no crocs at a popular recreation facility — rangers “failed to find” one. Complete with pics of bikini babes and what looks like a man with his pants down …

Murdoch will take in the Melbourne and Sydney newsrooms on his two-week visit. A News Ltd mole told us “normally everyone is on edge” when Murdoch is in town, but so far there have been no special story requests (he tends to favour animal stories). If you’re a News employee, drop us a line on what happens when the chief calls in. And you can stay anonymous … we’re also very curious about Murdoch’s speech to the IPA in Melbourne tomorrow night (MC is Andrew Bolt). Crikey is not allowed to go to the dinner, so we’re hunting for citizen journalists who want to boost the freedom of the media, to tell us what happens in there. Get in touch.

The students are revolting. An academic type tells us Sydney University’s Students’ Representatives Council has struck for three days so far this year, in support of striking NTEU members:

“The SRC is fully funded by the Student Services and Amenities Fee and the guidelines covering that funding strictly prohibit monies being used to fund political actions. Staff at the SRC are covered by a different EA than University staff. The cost of these reckless actions by the SRC, that is, wages paid to staff and stipends to their Council members for services not provided over three full work days would be considerable, and have been entirely paid for by students.”

Our source reckons it’s a waste of students’ compulsory fees.

Council dramas. Which mayor kicked out a Labor councillor at a meeting last week — apparently before business had even started — prompting the other two Labor councillors to march out in solidarity? Sounds a little tense in chambers …

No paperwork. A caller to 3AW this morning reckons thousands of documents relating to the abuse of children — which might be useful for the royal commission into child s-xual abuse by institutions, which starts today — have not been scanned into the archives at the Department of Human Services. The caller reckoned it would cost several million dollars to scan the documents. Do you know more — what do the documents relate to? Librarians can fill us in here.

When it comes to reptiles of the press, what a croc.
Is there a bigger salty in that stagnant pool than “Ol’ Rupe”, with his one Right eye?

Of course Rupert Murdoch didn’t see any crocs. They all knew the monster croc was around and they stayed clear of him. Rupert, it’s called professional courtesy.