Haigh: why we’re wasting our seat at the UN Security Council

Bob Carr is not making use of Australia's Security Council seat. Will we ever stop following in lockstep with the Americans and show some Aussie initiative? Retired diplomat Bruce Haigh offers suggestions. 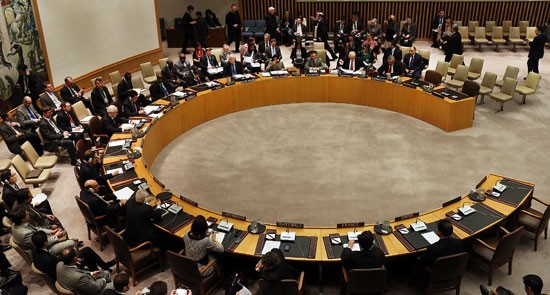 At last Australia has a seat on the United Nations Security Council. But what are we going to do with it?

In January Crikey highlighted the under-resourcing of Australian membership of the United Nations Security Council. Australian Foreign Minister Bob Carr responded, and more staff were assigned to service the demands of membership.

But the pressure remains, with the deterioration in security on the Korean Peninsula, a military, political and humanitarian crisis in Syria, ongoing tension in the Middle East and a territorial dispute in the South China Sea between China and other littoral states. These are issues that require a response and about which the Australian delegation to the UN must brief the Prime Minister and Foreign Minister.

As important as they are, however, these are reactive issues. The challenge for Australia is whether it can develop creative and proactive policy for Security Council consideration. The alternative is to shun initiative, maintain a low profile and vote with like-minded members — or in other words, follow the lead of the United States.

It is now obvious that in pursuing membership of the Security Council, Kevin Rudd as prime minister and then foreign minister had no agenda other than satisfying his vanity and ego. Asked after the last Crikey article what role he saw for Australia on the Security Council, he responded with a list of current issues requiring a response. There was no imagination at play, no creative agenda, no consideration of issues that might affect Australian and our region.

As Foreign Minister, Bob Carr is similarly bereft of constructive ideas on how this unique opportunity of our Security Council membership might be used in pursuit of an Australian agenda. In a sense it is not surprising considering how devoid of ideas and morally bankrupt the Labor Party has become. If Carr has an inclination to act constructively with respect to the Security Council he should do so now before his credibility is destroyed by the Independent Commission Against Corruption.

One place Carr is falling down is in relation to China, which is not consulting with Australia on important issues. Prime Minister Julia Gillard, Trade Minister Craig Emerson, Employment Minister Bill Shorten and Carr are taking off for China on Friday to strengthen the framework of the relationship. Given the amount of trade there is a feeling among bureaucrats, academics and other observers that China is taking the diplomatic relationship with Australia for granted, but that cuts both ways — Australia has sent some very strong signals it shares US security concerns about China, to the point of agreeing to the basing of US military assets in Australia, including Marines in Darwin. But Australia should be using the Security Council to engage on issues of concern to China, independent of the US.

Australia should also take the initiative and begin the process for the Security Council to consider the placement in Afghanistan, after the withdrawal of NATO, of a UN Human Rights monitoring team with particular reference to protection of the rights of women and children. Australia should also press, through the Security Council, for a UN peacekeeping force to be deployed in Sri Lanka to protect Tamils currently suffering r-pe and abuse at the hands of the Sri Lankan military. Peacekeepers might also seek access for UNHCR to process asylum seekers within Sri Lanka under the protection of the peacekeeping force.

The issue of the export of live animals for food should be regulated under an international protocol. As a major exporter of live animals, Australia has the experience to negotiate an agreement with a 15- or 20-year sunset clause leading to the phasing out of the live trade in favour of chilled and frozen meat. The need of islands states in the face of climate change is another issue Australia might take up. Australia might seek UN focus on the need to look again at the UN Convention on Refugees with a view to simplifying the wording while at the same time tightening provisions obliging states to provide protection. Australia might also seek to negotiate a convention on the right of the individual to potable water.

Carr is coasting. The real test of a foreign minister is moral courage and judgment. Imposing unilateral sanctions on North Korea, as Carr proposes, shows little judgement when he could seek to lead a bilateral focus through our seat on the Security Council.

Mid-term report card: Australia a US ‘puppet’ on the Security Council?

Why Australia’s Security Council bid was a mistake

This is a pretty asinine piece. No doubt ego plays some role in Rudd’s foreign policy aspirations. But there is no justification put for why a “creative” and “imaginative” foreign policy agenda, assertively driven by a PM or FM, was ever necessary to the desirability and suitability of Australia seeking a seat on the Council. Indeed, the humanitarian ideas suggested hardly qualify for such grandiose terminology.

I would have thought the simple fact of our status as a middle power inter-mediator and our extant contributions to the US security guarantee and associated military interventions are more than sufficient to have a seat on the Council, with a say on Chapter VII matters. We are already involved, so vote makes sense without any agenda regardless. It is different and much more modest argument to say we are merely not well-positioned to fully exploit the advantages afforded by such seat, but hyperbole precludes this.

It seems Mr Haigh is suffering from the all too common malady of Kevin derangement syndrome which involves transference of extreme dislike for Mr Rudd’s personality onto his erstwhile projects without much rational discourse behind it.

Come on Bruce, that is bullshit.

Carr is too busy in INdonesia reforming terrorist police to hound refugees.

And Gillard is busy trying to send home Hazara to die.

Why on earth do you write human rights and this frigging government in the same sentence?

@Will
It might be a bit fanciful to suggest that Australia should ‘engage on issues of concern to China independent of the US’ in the UN Security Council, but to dismiss the other ideas presented here as ‘humanitarian’ disparages the role of the UN as a promoter or sponsor of democratic principle and a forum for consensus and detente. Regardless of the real weight you give to the effects of human rights abuses by unrepresentative regimes, the outcomes for minorities and other vulnerable groups has a tangible effect on international relations and security through the ongoing malignancy of regional instability. If the UN has a strength it is in reinforcing, expanding and normalising representative and democratic values in government. In this respect it is far from reactive; it needs to be ‘creative’ and ‘imaginative’.

The game of strategic alignment and realpolitik will invariably continue on a multilateral level inside and outside of the UN, but its strength is as a forum promoting the primacy liberal democratic values. Like all real-world solutions to problems these actions require deliberate planning and at least agreements in principle so there is a baseline for future advancement. This seems to be the kind of agenda for advancing Australia’s ideological values that Haigh is proposing, and it doesn’t seem asinine at all.