Rupert chats to ABC in Darwin ... is he catching up with Rebekah Brooks in Oz? ... Visy job cuts ...

Rupert touches down. Crikey favourite Rupert Murdoch is in Australia for a visit — first stop Darwin. This pic comes courtesy of Murdoch’s official Tumblr, where you can also watch him tweeting on an iPad and sharing a birthday cake with News princeling (and heir apparent?) Robert Thomson. 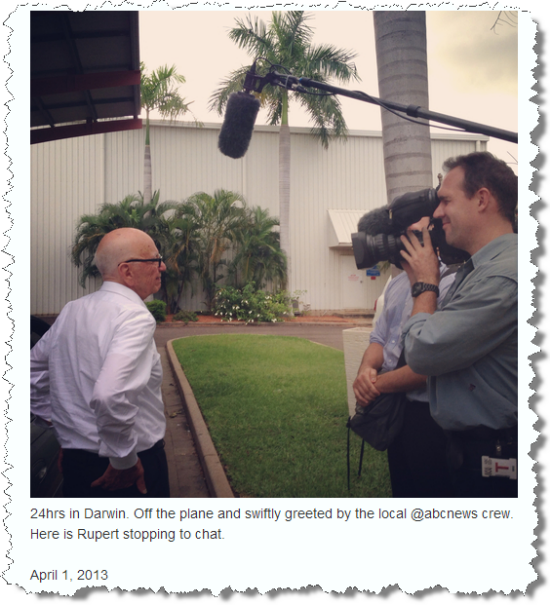 The Australian Financial Review reckons Murdoch will be in the country for two weeks, hitting Sydney and Melbourne and possibly his property near Yass in NSW. Tantalisingly, former Murdoch protege Rebekah Brooks is also in the country. Will the two catch up?

Apparently when Murdoch is in town and visiting his tabloid babies, it can make for tough times in the newsroom. Any News moles like to fill us in on what happens? Is the boss pressing for more animal stories? (You can check out his form on that front here.) Is there an issue Murdoch is particularly interested in this time around? And if you spot Murdoch and Brooks having a coffee, do let us know.

Murdoch is palling up with Andrew Bolt in an IPA speech in Melbourne on Thursday night, which Crikey has been barred from attending and covering (“sold out”). We’re looking for people who are going to fill us in afterwards. Murdoch moles can put their names down here.

Job cuts at Visy? This comes from an anonymous insider at the cardboard box giant:

“I am a Visy employee and there has been approx 700 people that have lost their jobs across the business, with another 280 to go soonish. Jobs have been cut to safety, IT, payroll, customer service and accounts payable. These jobs have been sent to Asia. Absolute disgrace.”

That certainly sounds like a lot of jobs. We put the tip to Visy but have not heard back; we’ll keep you posted. We rang around some Victorian unions, which were not aware of the job cuts (it’s complicated because various unions cover the company) — has our mole got the story wrong?

Print woes. You might think struggling newspapers would be desperate for advertising revenue — not so, according to this frustrated spinner:

“The way print media is moving to group selling means that if you are not a top 10 spender these days it’s almost impossible to place an ad. We are a small PR company and have been asked by a couple of our clients to place advertising for them in places they have experienced good traction with editorial coverage. One of our team has a background in sales and picked up the phone. This is a summary of her experience: ‘Called News Australia and asked about AB skew of a particular insert. Response: Don’t know and there’s no one in research today. Called Fairfax to ask about the cost of a third page in Spectrum. Left four messages. Response: NONE. On fifth attempt got hold of someone who didn’t know the answer and didn’t know who to pass the request on to’.”

The biggest losers are … the viewers. Should you have made the grave mistake of watching the present series of Ten’s The Biggest Loser, which features ritual humiliation and exploitation of overweight children and their parents, it turns out you’ve been missing out in more ways that one. Some contestants were expunged from the series before it even went to air; the network cited “an event” involving two contestants. The Sydney Morning Herald reckons there are rumours of an inappropriate relationship. Do you know what happened? Drop us a line.

I’ll be there – I’ll keep you posted.

For anyone who thinks the Romans were masters of appallingly bad taste entertainments, I give you “The Biggest Loser”.

God above, how could anyone actually watch this stuff? Or more tragically, subject themselves to the ritual humiliation of being paraded on TV to a voyeuristic public?

It’s utterly beyond my fathoming.

Then again, Christopher, look at Labor….?
“Any publicity is not necessarily good publicity”.

{Abbott can avoid it like the plague – and look at his popularity?]

Klewso will you really be at Rupert’s ball? Can you email us at [email protected] if so as we’d love to talk to you about what happens. Despite our best efforts we can’t get a ticket for Crikey.