Irish playwright Enda Walsh wrestles Beckett, Joyce and Homer and comes out a little worse for wear in Red Stitch's Penelope, despite some winning (near-naked) performances.

If you replaced the two hobos in Waiting For Godot with four semi-naked male playboys, what would you get? Something not a million miles away from Penelope, a revisionary take on The Odyssey by prolific Irish playwright Enda Walsh.

Penelope charts a day in the life of four suitors to the eponymous wife of Odysseus. The great hero been away fighting the Trojan wars for years, and in his absence 100 men have tried to woo her. Having outlasted the rest, the final four while away their time trying to catch Penelope’s eye and rid themselves of the other competitors. Like Godot, it’s a play of waiting, but in place of Beckett’s pared-down prose Walsh gives us something more verbose. Whether the audience will wait as patiently for the story’s conclusion as the characters have is doubtful.

The suitors present four distinct models of masculinity: bitchy Dunne, bookish Fitz, aggressive Quinn and the runt of the littler, a young idealist named Burns. Egoistic and competitive, in the guise of “educating” Burns about manhood, Quinn embodies everything that is most risible about macho culture, proclaiming: “We are men, and what we do not do is trust.” As the day wears on, tempers fray, and the bullying builds to a violent conclusion.

If there is one thing the play examines closely (apart from the bodies of the four courageous actors, who perform almost the whole thing wearing only budgie-smugglers), it’s the cult of masculinity. Ancient Greek culture has long been associated with the masculine ideal, with homoeroticism and with heroism. And there is perhaps no hero quite as compelling as Odysseus the trickster adventurer — just ask James Joyce.

As the four men variously strut and cower in the swimming pool, the anxiety of living in the shade of this absent, untouchable model of masculinity is palpable. When they receive an omen that Odysseus is about to return, it seems like it’s not just violent retribution they fear, but the prospect of being compared with this perfect specimen of manliness.

The question of what it is to be a man is at the heart of the play, articulated most clearly in the conflict between Burns’ chivalry and the dog-eat-dog ruthlessness espoused by Quinn. As far as questions go, it’s both timeless and somewhat timely, with the idea of a 21st century “man crisis” gaining currency lately thanks to some surprisingly wide-raging voices, from The End Of Men by author Hana Rosin to men’s rights campaigner Mel Feit.

But this isn’t a play solely about men without women, and in its treatment of Penelope’s character it becomes markedly less interesting. Even the ancient Greeks managed to give her a better part than Walsh: in the myth she is an active player in a game of cat and mouse with her suitors. In the play she never escapes the role of the distant, idealised feminine, whose main activity is wafting around her bower.

Adding some handy context to all this gender talk is the striking and highly effective production design. Using the space gained by moving the show out of Red Stitch’s home theatre to the larger TheatreWorks to its full, the set locates the play in a thoroughly Aussie frame of reference. It’s a surreal yet familiar scene; a barbecue — which turns out to have mystic properties — takes centre stage, and there’s an esky, a drinks table and plenty of sunscreen in evidence. In the foreground the men lounge around in their swimmers, but in the background an enormous heap of domestic detritus suggests the decay and degradation of a long war which has rendered those left behind obsolete.

The four male actors keep the energy up throughout; in particular, newcomer Matt Whitby acquits himself well as Burns, and James Wardlaw’s nebbishe Fitz is a delight. There are some enjoyable gags and innuendos aplenty; much is made of the last remaining sausage which Quinn — played with verve by Lyall Brooks — barbecues and devours with relish.

But despite these moments of levity, the writing too often falls flat. Lacking strong direction, it’s uneven at times, with many a ponderous soliloquy and oddly long silences in between lines. This criticism can’t all be placed at the feet of director Alister Smith, however. If the four characters are living in the shadow of Odysseus, the matchless hero, spare a thought for the playwright, who seems to have grappled with Beckett, Joyce and Homer — and come away the worse for wear.

The details: Penelope plays TheatreWorks in St Kilda until April 13. Tickets on the company website. 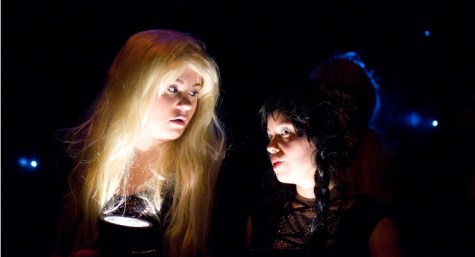