Twitter is understood to have acquired We Are Hunted, the Australian-founded music discovery start-up, in order to build a major new standalone app called Twitter Music. Plus other media news.

Food site for Private Media. Private Media, the publisher of Crikey, will launch a new food-themed website in the second half of this year. Former Age journalist and Epicure editor Jane Willson will be editor of the yet-to-be-named site, which will initially cover the Melbourne market. Tessie Vanderwert, formerly of The Age‘s Life and Style editorial team, will be the site’s commercial manager.

Rating the Tele‘s financial coverage. Sometimes The Daily Telegraph gets caught out pretending to be an actual news outlet, rather than an anti-Labor propaganda machine. After last week’s laughable “debt crisis” piece by John Rolfe and Gemma Jones, ratings agency Fitch, where The Tele sadly doesn’t seem to be read, reaffirmed Australia’s credit rating at AAA with a stable outlook, due to a “combination of low public debt, a free floating exchange rate and liberal trade and labour markets”.

Oddly, The Tele didn’t report this. It did, however, report Fitch had downgraded the Bank of Cyprus’s rating. So, The Tele thinks we should be fully up to speed on Fitch’s view of Cypriot banks, but happily omits any mention of Fitch’s view of Australia. Oddly, neither Jones nor Rolfe responded to repeated invitations on social media to explain themselves. — Bernard Keane

Fairfax apologies to Pell, Ita. Fairfax avoided a no doubt hefty settlement with Catholic Cardinal George Pell with a very public apology in The Age and The Sydney Morning Herald and a host of other Fairfax papers and websites on Saturday. Pell publicly threatened to sue the company over the Barney Zwartz analysis piece on March 11 regarding Pell’s chances of becoming pope and his dealings with abuse cases in the Church. The apology read:

“Our description of the outcome of the 2002 investigation by retired Victorian Supreme Court Judge A.J. Southwell into allegations against Cardinal George Pell did not fully set out his findings about Cardinal Pell. Soon after Mr Southwell made his findings in 2002, The Age published an article describing the findings as ‘a just result’ and The Sydney Morning Herald accepts and agrees with this conclusion. As we said in an article published on 14 June 2010, this independent investigation cleared the Cardinal.

“The Sydney Morning Herald apologises sincerely to Cardinal Pell for any suggestion to the contrary and for any adverse reflections on him in our 11 March articles.”

Meanwhile, The Australian Financial Review had to eat some humble pie in its edition today for some scurrilous assertions made by gossiper Joe Aston in January … 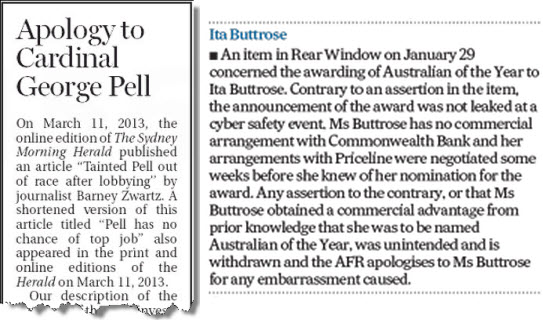 Australian website caught by Twitter? Twitter is understood to have acquired We Are Hunted, the Australian-founded music discovery start-up, in order to build a major new standalone app called Twitter Music. CNET reports the Brisbane venture, which has since decamped to San Francisco, was acquired secretly by Twitter last year and is working on a relaunch that would spearhead Twitter’s foray into the sphere of music recommendation for its users.

Richard Slatter, general manager and co-founder of We Are Hunted, would not confirm the deal when contacted by this morning. “I can’t say anything at all — it’s a rumour that has got out there and Twitter has a policy of not commenting on rumours,” he said. “We are following suit on that, so I can’t comment.” Slatter would not reveal why We Are Hunted’s website has been down for the past two weeks, nor why the business hasn’t updated its Twitter feed since February 25. However, it has been reported the start-up has downed tools to work on a music recommendation app for Twitter. — Oliver Milman (read the full story at StartUp Smart)

Game over: our man powers down. I’ve had a terrific 14 months running Game On here at Crikey. It’s been a privilege to write about video games for Crikey‘s informed, generalist audience, but the time has come to move on. Apart from the regular freelancing that I do, I’ll be shifting my online home for my writing over to ABC Arts, where some exciting things are happening.

I’d like to thank my editors at Crikey for taking a chance on a video games blog and my writing, and all of Game On‘s readers for being swell. This will be my last post. By way of saying goodbye, I thought I’d do a bit of a recap of the moments and the articles that I feel like have defined my time here. I hope you’ll forgive a bit of self-indulgence … — Dan Golding (read the full story at Game On)

The column that ran for 46 years. From time to time you stumble across stories that deserve a wider audience, not that this little blog would carry much weight in the sub-continent from where this story comes. Yesterday a post on the Bangalore Birds internet group sparked my interest in the life and work of Madhaviah Krishnan, an Indian journalist who for a remarkable 46 years wrote a column for The Statesman of Calcutta called “Country Notebook“.

I’ve had a look at a few of his columns and they compare more than favourably to that other long-lived exemplar of nature writing, The Guardian‘s Country Diary, which has run — albeit with many different writers — for at least 100 years. But singlehandedly penning a column for 46 years wasn’t the only string in M. Krishnan’s bow  … — Bob Gosford (read the full story at The Northern Myth)

Front page of the day. With Rupert Murdoch bunkered down at NT News headquarters in Darwin today, editors were hoping to bring their A-game. Thankfully there was croc news to report in this morning’s edition, though we’re not sure an upturned dingy constitutes “drama” (the late edition of the paper quickly got onto the missing light plane at Bullo River Station). 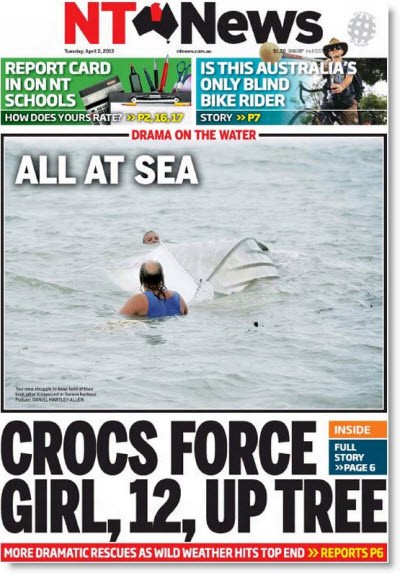 Try catching up with Jones and Rolfe after the sun goes down – when the trolls and trollops come out?