Writer and environmental activist Debbie Lustig wasn't allowed to join the Victorian duck hunt without a gun licence and licence to hunt waterfowl. So she got both, and headed off with the hunters -- in protest. 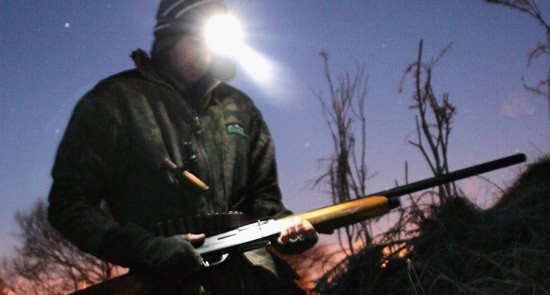 In December last year 24 men and four women, including me, assembled for the compulsory test of the Victoria Police Firearms Safety Code to obtain firearms licences. The test is part of a new suite of laws that prohibit anyone without a gun licence and licence to hunt waterfowl from being within 25 metres of the shore during the duck hunting season.

But I didn’t want to shoot ducks. I was there to get the pieces of paper I needed to protest against the practice of duck hunting. Here’s the story of how I did just that.

With no preamble, the host produced a mangled tube of metal. We fondled it and passed it on. It was a piece of the action of a shotgun, ruined by someone using ammo of the wrong calibre. It was the closest I’d ever been to a gun. The host went on to take us through parts of a gun, gun types, loading considerations and so on. After that, the local District Firearms Officer lectured on where a gun must be locked up (in a safe place, separate from the ammunition) and the other nine rules of firearm safety.

Then it was time for the 30-question, multiple-choice test. “We want you to pass,” said the policemen. “It’s designed for 13-year-olds!” He addressed individuals as he wandered around during  the test. “Are you sure about that?”; “What about option (B)?” Questions included:

(B) refuse to shoot with them

(D) check their physical and mental reactions before deciding whether they are likely to be safe in the field.

The arcade game Big Buck Hunter seemed more realistic than this. At least in the game you get to fire a shotgun, albeit a plastic one on a crappy swivel. Are there any other lethal weapons you’re allowed to handle in anger after passing only a written test?

With mine duly passed — a couple of incorrect answers notwithstanding — an eight-page application had to be filled out. A medical letter is required  if you’ve been treated in the last five years for psychiatric, alcohol or drug problems. I’ve had the odd psychiatric issue and have a conviction for drug possession. I got my firearms licence in the mail four weeks later.

If you wish to hunt ducks, you must also obtain a game licence, passing a 22-sequence video test identifying  “game” and “non-game” species. Here, I lost points for misidentifying a rare, endangered freckled duck. I passed anyway (with an A). The once-only waterfowl identification test was introduced as a precaution against wild, inaccurate firing in 1990, the result of lobbying by anti-duck hunting activists.

Thus equipped with the legal right to do so, on March 16, wearing wetsuit booties, leggings, shorts and a high-visibility vest, I waded into Lake Bael Bael, near Kerang. Minutes before the official opening of the season, the guns exploded. Five or six flocks of birds burst up and wheeled round in circles, scattering across the sky. Fastest were the game species — pink-eared ducks, with spatulate bills and torpedo profiles, while the sharp-winged silhouettes of avocets and stilts were smaller but unmistakable. Black swans flew majestically while tiny sandpipers pecked at the muddy edges. Shooters shot at everything.

As a perfect dawn flooded the sky, the dismal spectacle of birds falling began. With each hit, you tried to follow the body down. Birds killed cleanly tumbled in a vertical line, while wounded ones flew on at diminishing angles, losing height and speed, crash-landing on the water. Shooters urged their dogs to collect still-flapping birds, or waded over slowly and picked them up. Dying ducks were twirled by the head like yo-yos.

A fellow rescuer scooped up struggling birds with a fishing net. He offered them to shooters; the men refused. Somebody handed me a wounded teal. As a licence-holder, I was permitted to have possession of this native species. I rushed it to the vet, where it was euthanised.

Other rescuers were stopped by wildlife officers and charged with “failing to kill” wounded birds. This charge was tested against rescuer Tony Murphy in court last year and withdrawn. At Lake Bael Bael, the authorities detained a woman with a wounded duck, metres from the vet’s tent. She was aggressively questioned for over an hour; unsurprisingly, the bird died in her arms. None of the shooters was charged with violence, cruelty, or “failing to kill wounded game”. More activists were charged this year than ever before for “harassing and hindering” hunters, “failing to kill” wounded game or breaking the law keeping non-hunters on the sidelines.

Hunters tossed casual obscenities at the rescuers, who appeared to be a minor annoyance as they got on with the business of shooting down the birds. In the worst birdwatching site in the world, I kept the requisite 20 metres from the brown-and-green clad men and trained my binoculars on tiny sharp-tailed sandpipers, which fly here from the Arctic. They flew low, turning together in a frenzy.

After the opening weekend, Field and Game Australia’s chief executive said some who had obtained firearm licences and game hunting permits might be “in breach of the genuine reasons they used to obtain a firearm licence”. Indeed — I will never hunt.

In Victoria, no one defends these birds except a ragtag army of self-styled “rescuers”; the media are kept away. If these rescuers weren’t out there, no one would ever hear about the gross acts of cruelty, the protected and threatened species killed and the sheer unaccountability of duck hunters. As a society, we are all implicated, should we let it endure.

Cause for alarm? Australia has more guns, but they’re less dangerous

Ducks in even more trouble than economists

As always I read of violence to animals and get the usual feeling of helplessness. How do we effectively put a stop to barbaric pastimes like this? if anybody has answers, please comment.

“I rushed it to the vet, where it was euthanised”. That seems like unnecessary cruelty to me. I’m not into hunting but what’s wrong with killing the bird instantly on the spot rather than prolonging its pain?

Dear Victoria
I now won’t be visiting your state after all this year; I was due to be there in September.
I am sure that won’t bother you, as you and NSW gather up all the gun-nuts to replace people like me who once enjoyed your food, your wineries, your landscapes, your culture.
Your choice to change the culture, as you clearly are – mine too to pick whom I rub shoulders with.

Debbie kudos for the inside story. The thought of killing for sport sickens me. I don’t understand the mentality. I’d like to know what goes through a duck hunters mind before the kill… motive. How can killing harmless birds on their migration be pleasurable?
Personally though I enjoy pistol shooting… at a pistol range. I felt temporarily overwhelmed the first time I held a weapon. A sense of how powerful it was, knowing the person who holds a gun holds the balance of power. The stakes are high in the hands of those with ill intent in a split second it’s life or death.
I have one word for guns RESPECT & one word for game hunters HEARTLESS.

And in the interest of balance Crikey will seek a story from a duck hunter? Ps duck hunting isn’t a sport it is a recreation like fishing. You do it for food. Yes living things are often where protein comes from …