Nervous times at the ABC? A mole has passed this on about the ABC’s — we tried to work out what the “director of people and learning” does, but were confronted by a barrage of meaningless management guff. Seems to be something to do with HR and managing people.

“The new Director of People and Learning is looking worse for wear. Ultimo rumour mill is in overdrive that dead wood are safe because the ABC cannot afford the hefty redundancy packages to get rid of them. Plan B is to wait and see if the Liberal government gets in which will surely slice through the layers of the bloated, bureaucratic vat that is ABC’s People and Learning. In the meantime useless policies, procedures and long morning teas continue all at the taxpayers’ expense.”

Crikey is the Cinderella at Rupert’s ball. It seems that freedom of the press is not so free. Crikey very much wants to send a reporter to Rupert Murdoch’s speech to the IPA in Melbourne next Thursday. The dinner commemorates the 70th anniversary of our friends at the IPA and will be MC’d by Andrew Bolt. We thought our readers would love to know what’s said at the dinner, and what one of Australia’s most powerful people thinks about the world, but unfortunately our application to attend has been rejected. We’ve been told it’s sold out and there’s no separate entry list for journos.

So we’re calling on you, readers, to help us report on the night. If you’re going to the dinner, or know someone who is, get in touch with us and we’ll arrange to talk to you after the dinner. We just believe in freedom of speech and of the press, that’s all, Mr Murdoch.

It’s what Jesus would have wanted. Staff at this Tasmanian council might need to upgrade their Bible knowledge — Crikey is no great shakes in this department, but we’re pretty sure Easter and Good Friday don’t usually fall on the same day. 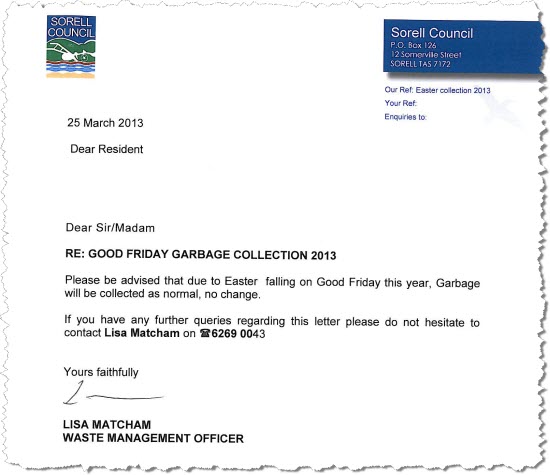 Zed triumphs in ACT battle. Sitting ACT Liberal Senator Gary Humphries has lost his bid to stay on in politics. He was beaten by the up-and-coming Zed Seselja in a surprise preselection earlier this year, which caused plenty of outrage among ACT Liberals and led to a meeting in Canberra last night to decide whether to select afresh. Team Gary was confident of winning, but they lost, 138 votes to 168, so the preselection of Seselja stands.

Crean not in hiding. We got this from a tipster: “Simon Crean was booked to do a fundraising dinner for noted Gillard-backer Laurie Ferguson next month. Wonder if that’s still on?” We checked that with Ferguson’s office, who confirmed Crean was still going to speak at the fundraiser for ALP members in Parramatta next month. Seems our source is just making trouble …

Happy holidays. With the Easter break looming, we thought we’d bring you the final installment of Crikey’s “working days of yore” tips. Inspired by the grim tale of CSIRO’s workplace lolly ban (did they receive an Easter reprieve for workplace chocolate?), we’ve been bringing you reminisces from readers of days when workplaces were more fun and less like the dark satanic mills of today, with OH&S rules at every turn and 10 hours a day chained to the computer. One thing that’s become evident from the response from readers is just how much boozing used to take place …

“Editors and producers of a well known science show in the 90s used to go to the pub for lunch (sometimes we’d actually eat). Returning from the pub late afternoon after the obligatory Jack Daniels roadies I was confronted by the executive producer who looked displeased. I told him where we’d been and he said ‘why didn’t you invite me?'”

“I worked in the UK steel industry in the 70s in a technical job that involved close encounters with heavy machinery, and the handling of hazardous chemicals. Our standard Friday lunch routine was to get the bus into town, two pints in the pub, grab a cream bun from the cake shop next door, then bus back to the steel works. I never heard a single comment from the manager on safety, but they were very strict on timekeeping so the above routine had to be completed in under 60 minutes or we’d be explaining ourselves to the ‘personnel manager’.  In the late 80s I joined the steel industry in Australia, and found out that over here a positive breath test was one of the few offences that would earn instant dismissal. That’s how times change, to the benefit of us all!”

“I lived in the UK during the 80s, and work for a major engineering company. As outworkers, we used to fly in and out of the local airport, and a company man would pick us up, drive round to the pub, and we would all have a very long lunch, splitting the bill on expenses, so the driver had a free meal. Whilst in the company office it was usual to retire to the Liberal club next door for a round of snooker later in the morning, and then to the nearby pub for lunch, known as The Annexe, as the barmaids knew more than the managers. Happy days, and pleasant memories.”

It all sounds like good clean fun, except we have to draw the line at a lunch of two pints and a cream bun, a bus ride and an afternoon’s hard toil at the steel mill. Makes us modern hipsters feel queasy …

Crazy tip of the day. We don’t normally share our more eccentric tips with readers, but because it’s holiday season, here’s one that caught our fancy. We have our doubts about this tip …

“The tap begins to leak. I hear the centrepiece of the Liberal Part policy to deliver a surplus is — surprise. Surprise — a lift of 5% in the GST.”

FFS and by “Rupert’s Ball” – have you learned nothing about “freedom of speech” :- “If it’s not in Murdoch’s interest, it can hardly be in the public’s!”?

I cant believe that you are thinking that Crean is anything but a Gillard supporter. I would have thought it was quite obvious that he ‘took one for the team’ in taking Rudd out of the race.