Australia is again near the top of the heap in a United Nations Development Programme report, plus other political issues of the day.

A good news development story. Amid all the doom and gloom stories of Europe’s continuing economic problems, the 2013 Human Development Report of the United Nations Development Programme provides a cheerful diversion. The Rise of the South: Human Progress in a Diverse World argues the striking transformation of a large number of developing countries into dynamic major economies with growing political influence is having a significant impact on human development progress:

“The Report notes that, over the last decade, all countries accelerated their achievements in the education, health, and income dimensions as measured in the Human Development Index (HDI) — to the extent that no country for which data was available had a lower HDI value in 2012 than in 2000. As faster progress was recorded in lower HDI countries during this period, there was notable convergence in HDI values globally, although progress was uneven within and between regions …

“By 2020, according to projections developed for this Report, the combined economic output of three leading developing countries alone — Brazil, China and India — will surpass the aggregate production of Canada, France, Germany, Italy, the United Kingdom and the United States. Much of this expansion is being driven by new trade and technology partnerships within the South itself, as this Report also shows.

“A key message contained in this and previous Human Development Reports, however, is that economic growth alone does not automatically translate into human development progress. Pro-poor policies and significant investments in people’s capabilities — through a focus on education, nutrition and health, and employment skills—can expand access to decent work and provide for sustained progress.”

Australia fares well. I cannot remember the last time an international comparison made by a reputable organisation did not put Australia at or near the top of the countries doing best. And that UNDP report is no exception. It argues that what matters is not only the level of income, but also how that income is used.

“A society can spend its income on education or on weapons of war. Individuals can spend their income on essential foods or on narcotics. For both societies and individuals, what is decisive is not the process of wealth maximization, but how they choose to convert income into human development. [The table below] shows country successes in this respect, as measured by the largest positive difference between GNI per capita and HDI ranks.” 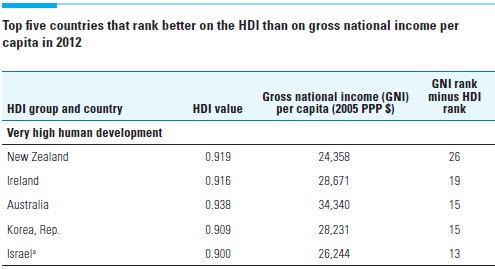 Those Chinese made iThings. A fascinating insight from the report … into the way that the final assembly of electronic products is about more than low wages:

“The iPhone and iPad, two popular technology products, are assembled in a firm in Shenzen, China, and sold worldwide at retail prices in the hundreds of dollars. The value of labour performed in China, at under $10, accounts for less than 2% of the cost of an iPad, while just 3.6% of the wholesale cost of an iPhone went to Chinese workers. The rest of the value is earned by suppliers of parts and components headquartered in Germany, Japan, the Republic of Korea and the United States. Korean firms LG and Samsung make the display and memory chips; Apple retains the product design, software development and marketing functions in the United States; and the assembly firm is owned by a company from Taiwan Province of China.

“The low share of value captured by workers in China could give the impression that assembly does not require much sophistication. This is misleading. While Asia is attractive because of cheaper wages, especially for semiskilled workers, a more important challenge for technology companies is managing global supply chains that involve procuring parts and components from hundreds of companies. This requires a rare combination of industrial skills, flexibility, speed and diligence at both the individual and collective levels. For instance, an Apple executive told The New York Times that ‘the US has stopped producing people with the skills we need’.

“Consider this incident from mid-2007, when Apple hastily redesigned the glass for the iPhone’s screen. The first delivery of a new load of strengthened, scratch-free glass arrived at a Foxconn plant in the middle of the night, and work started immediately. Within three months, Apple had sold a million iPhones. It took 15 days to hire 8,700 industrial engineers to oversee the 200,000 assembly-line workers eventually involved in anufacturing iPhones. Apple’s internal estimate was that a similar feat in the United States would have taken nine months.”

Forget about the horses, have a bite of lion meat. Representative Luis Arroyo has introduced a bill in the Illinois General Assembly to make it illegal to possess, breed, buy or sell lions for their meat. 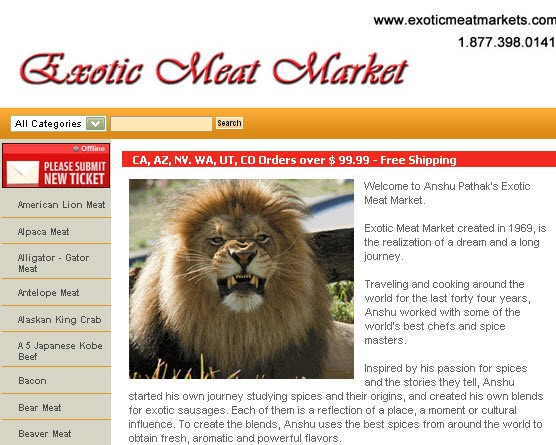 While US retailers that sell lion meat, including ExoticMeatMarkets.com, say their meat comes from animals raised on a USDA-inspected lion farm outside Chicago, Arroyo told NPR “I’ve always thought of the lion to be the king of the jungle. I never knew that people were consuming lion meat. I don’t know who would want to do that.”

Item 3 reminded me of last night’s Lateline – an Australian boom – “Made in China”?

The Lion Meat menu reminded me of Judge Dredd busting a MegaCity1 dining club which only ate endangered species.