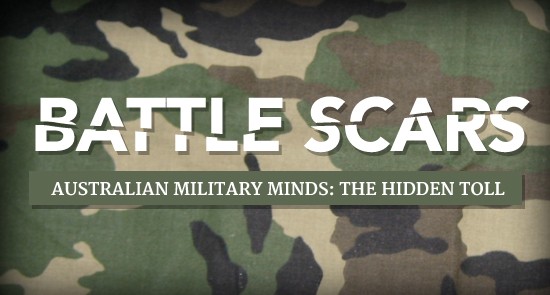 “I have a domestic violence order on my husband because he would get violent and then threaten suicide. We have two small children so the DVO was enforced by the police for the safety of me and our children. My husband has started smoking again – two packets a day. When he drinks he drinks to a point where he is incoherent and dangerously intoxicated. I have had to hide the keys to the cars and motorbike because he told me one day that he rode the bike as fast as he could hoping to kill himself and he is not sure how or why he managed to make it home.”

Such is life, detailed to Crikey, for the wife of an Australian military veteran. There’s hundreds, maybe even thousands, like her.

As one ex-navy officer writes for us, there’s one good thing about using drones — the men and women of the Australian Defence Force can perhaps avoid witnessing horrors that can scar so devastatingly.

Crikey‘s Battle Scars series has heard from serving officers and veterans, their families, mental health professionals treating them and the military and government on a rising toll we haven’t seen since Vietnam. Two conclusions are apparent. One, that the ADF recognises its inherent responsibility in sending Australians to war and is as well equipped to identify and treat post-traumatic stress disorder and other mental health issues as it has ever been — and yet it’s still falling horribly short. The undiagnosed and untreated suffering of so many, and the guilt and abuse felt by those who do seek treatment, is unacceptable.

And secondly, ultimately, the inevitably of this tragic toll. We send them to hell holes, we expose them to so much human suffering, we ask them to kill; even the toughest, strongest soldiers will succumb. The macabre scoreboard of war — in its many forms, at home and abroad — is not simply the dead but the life-long impairment of many more. Leaders are genuine in saying committing troops to conflict zones are the hardest decisions they make — they should think harder still.

Crikey says: away from headlines, assaults are rising

Violence against women we say no — except from another woman

Quote: “Leaders are genuine in saying committing troops to conflict zones are the hardest decisions they make …”

Really, then why are the peoples views not taken into account? Why are they not asked?

Just today John Howard declared that he has no regrets at sending Australians into Iraq against the advice of the UN. Thousands of Australians marched in protest, some even went there and offered themselves as human shields. Millions of Iraqi civilians have been displaced, wounded or killed – why should John Howard have any regrets? He is very comfortable with his top parliamentary pension, Gold Card travel, an office, a secretary and Commonwealth car. PTSD is hell for the sufferer but it also damages at least 2 generations of their family. The price of war is too high and the wrong people pay it.