Our twin science ministers ... naughty insurer to be investigated ... memo from O'Farrell ...

Two heads are better than one. Never say the Gillard government does not value science. Why, it even has twin ministers for it!

South Australian factional heavyweight Don Farrell has been elevated to be co-minister for science and research under the new regime. Tips got curious about whom scientists should call with questions, so we rang Farrell’s media spokesman to ask whether he was actually the science minister. “He is,” the spokesman confirmed. “The dust is still settling on division of responsibilities … This particular set-up is new.”

The new grab-bag-department, home to both twin ministers, lists both as the minister. Isn’t Farrell just the junior minister, or “minister assisting on science and research”? Apparently not.

PM&C normally puts out formal ministry lists to sort out who actually does what, but there’s not one on the website yet. This confusion may be situation normal in the bureaucratese of Canberra, but to a humble person far away from Parliament House, it seems ridiculous. How can you have two people with the same title?

We’re also interested how scientists view the appointment of Farrell, a Catholic and moral crusader dubbed The Godfather and the Pope in SA, whose power-base is the right-wing shop Distributive and Allied Employees Association (SDA). Farrell was previously parliamentary secretary on sustainability and water, where he wore a magic cloak of invisibility. He was instrumental in the coup that brought down Rudd. Let’s see how he treats his reward of being anointed science minister. We’ve had some feedback from a reader not too impressed with the appointment:

“Wonder how Australia’s scientists feel about having Don Farrell, an anti-science and archly conservative Catholic, as the minister for science and research. Politics is a strange game.”

If you’re a scientist, tell us what you think about it.

Naughty insurer. We hear that ASIC might be taking a look into a certain insurance broker, with a particular focus on the MD. Is this a case of potential fraud, where “several million dollars worth of policy holder premiums” might have been stolen? Seems like some in the wider industry have been talking about this company for some time. If you know more, we’d like to hear about it … and so would people who have policies with this company, no doubt.

Lunch pow-wow. Yesterday we pondered what Simon Crean and trucking magnate Lindsay Fox were chatting about over their lunch on Monday. This was one tipster’s response:

“Both are Melbourne High School old boys … but 12 years apart, and Fox was famously asked to leave. He remains close to the school, though, donating millions of dollars over many decades and occasionally using the school oval as a helicopter pad.”

Slip of the tongue. Tips was showing off yesterday about the correction pronunciation of the surname of Booker prize-winning author JM Coetzee, who spoke in Melbourne on Monday. The MC at the event, Coetzee’s publisher, pronounced his name Coet-zeea (to rhyme with “idea”) and Tips breathlessly brought you that fact. But did we get it wrong? A sharp-eyed reader pointed us towards this missive from the BBC, saying that Coetzee had written to the BBC asking his name be pronounced Coet-zee.

Letter from Barry. Interesting to see how NSW Premier Barry O’Farrell spins his achievements to his public servants — this letter was emailed to all staff. 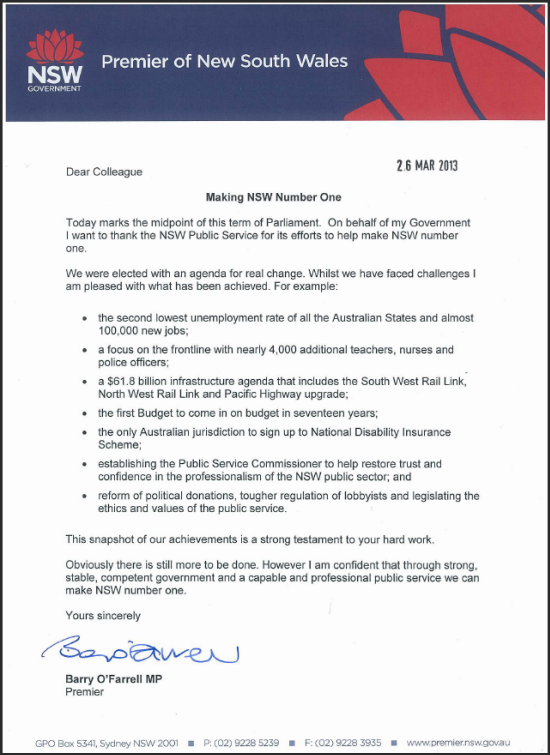 Re ‘Two heads are better than one’ – having two Ministers with the same words (in this case ‘Science and Research’) in their titles gives scope for harmless fun for commentators if confusion for other punters, but is not unprecedented. In the previous Ministry there was a Minister for ‘School Education, Early Childhood and Youth’ (Peter Garrett) and ‘Early Childhood and Childcare’ (Kate Ellis). In the current Ministry there are 2 Ministers with ‘Skills’ in their titles (Craig Emerson and Sharon Bird) – one paired with ‘Tertiary Education’ (presumably meaning Higher Education plus VET – i.e. skills) and the other paired with ‘Higher Education (presumably meaning not VET – but wait she has ‘Skills’ in her title – see what I mean about harmless fun).

But this sort of thing has been going on in increasingly more baroque ways under all governments since the changes of 1987 (declaration – I was a bit involved with them), as governments increasingly take an ‘every child wins a prize’ approach to naming departments and Ministers. Every matter which has an identified lobby or a government policy has to be mentioned in the title. Descriptive or non-specific terms in titles of Ministers and Departments (such as reform, efficiency, communities, innovation, to take a few at random) have also been sprinkled on top, as if inclusion of the word of itself makes it so. The result: titles of mind-numbing length, and acronym hell.

The words of course do not have such talismanic power – what matters is what the Ministers are actually responsible for and what they do. But a little more clarity and less spin in the names would help.

With a teacher in the family, we received one of Barry’s letters yesterday – via email I guess all teachers, nurses, police persons and others got one as well. Don’t you just love the date stamp, just like a proper letter! Thanks Barry – we’ve never had it so good!

Obviously Don Farrell is the Minister for *Creation* Science a.k.a. Intelligent Design.