Seven months after the government's expert panel on asylum seekers handed down its findings, boat arrivals are increasing. Crikey checks back to see which of the panel's recommendations have been implemented. 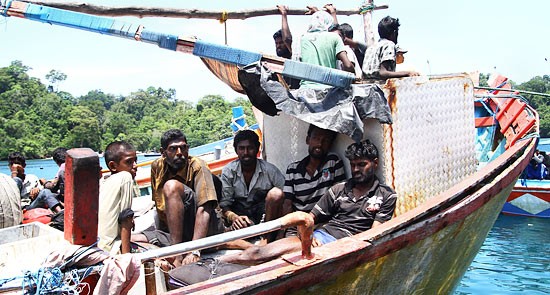 The flow of asylum seeker boats to Australia continues unabated more than seven months since an expert panel led by former defence chief Angus Houston handed down its report on asylum seeker policy. Over 3000 asylum seekers have arrived in Australia by boat so far this year, more than double the number for the same period last year.

Prime Minister Julia Gillard has called on the Coalition to end its “belligerence and negativity” by allowing her to implement the Houston review’s 22 recommendations. Review panel member Paris Aristotle this morning said more deaths at sea are “absolutely certain” unless every component of the package is put into place.

A Crikey analysis of government announcements since the Houston review was released has found that 17 of the 21 applicable recommendations have been achieved, partly achieved or started. The major omission is the lack of action on the Malaysia “people swap” agreement, which is opposed by the Coalition and key crossbenchers …

Recommendation 2: Increase Australia’s humanitarian program to 20,000 places a year — including 12,000 for refugees. The program should be focused on asylum seekers moving through South-East Asia.

Recommendation 3: Expand “capacity-building initiatives” in the region, including a significant funding boost for people smuggling and border control operations in the region.

Recommendation 4: Advance bilateral co-operation with Indonesia by: a) increasing the number of Humanitarian Program places from the country, b) enhancing co-operation on search and rescue missions and c) changes to people smuggling law regarding minors.

Recommendation 5: Continue to develop co-operation with Malaysia, including by accepting more refugees from the country.

Recommendation 6: Implement a “whole-of-government” strategy to engage with source countries and increase resettlement places from Asia and the Middle East.

Recommendation 7: Introduce legislation to support the transfer of people to regional processing arrangements.

Recommendation 12: Asylum seekers who arrive by boat should not be eligible to sponsor family under the humanitarian program.

Recommendation 14: Amend the Migration Act so that asylum seekers who arrive in Australia by boat are treated no differently than those who arrive in excised offshore locations (ie Christmas Island).

Recommendation 16: More effective strategies to negotiate the removals and returns of failed asylum seekers to their home countries.

Recommendation 19: Do not implement a “tow back the boats” strategy unless appropriate regional arrangements are in place.

Recommendation 20: Work with other countries to develop joint operational guidelines for managing search and rescue activities.

Recommendation 21: Review the linkage of the onshore and offshore components within two years.

While I don’t agree with some of the recommendations in the Huston review. It’s a welcome relief to read an article that attempts to deal with the facts, rather than spraying “opinion” all over the place.
I’m actually better informed after reading this piece than I was before. Kudos and thanks Matthew.

Thank you for the factual update.

This “report card” on asylum policy over the last seven moths entirely misses the point. So what if some or even all of the recommendations of the government’s expert panel have been “achieved”. The only measure that counts is: has the flow of asylum seekers slowed? The answer is a resounding NO; in fact the flow has INCREASED sharply. The argument that if only the Malaysia solution was implemented it would do the trick is wishful in the extreme. People smugglers and their clients have this government’s measure and nothing they do will work, even if the were to adopt every aspect of the coalition’s policy and even harsher action. The genie is out of the bottle and it will take years of determined effort by a new government to get back in control of our borders.

Daniel, no country on earth, except North Korea, is in “control of its borders”.

Daniel, Matthew. Everyone. So what? NOne of the recommendations have anything to do with law.

And what we do here has zero effect on anything except our ability to whinge louder and longer than any other country on the planet about bugger all.

These three old white rich public servants did not write a credible report so if it all fails that is to the good.

The refugee convention articles 1-34 is a legally binding treaty, it is not a handbag.

Everyone has the right to seek asylum and let me ask dingbats why they are so scared of people arriving on an island 2600 km out into the ocean and pretend it is about our borders?

ONe note in the UNHCR figures last year state that 1.1 million Syrians had fled by 1 january this year, 11,000 got to the west yet Jordan opens the borders and the west try to close them while also abusing Syria.

That report was a load of crap and I am shocked that anyone would think that it has any basis in anything at all.

There is no such thing as a no advantage test, resettlement is not the issue as it is entirely voluntary.

And Daniel, there are no frigging people smugglers doing anything. REfugees are paying for transport to be safe, that is entirely legal.