The real story of Australian debt -- only Crikey will tell it. Malaysia aside, could Labor do more to stop the boats? The Schapelle tax and our diva consular demands. How worried should Australia be about North Korea's missiles? And what Google reveals about our pollies (Julia and Julie are "hot"). 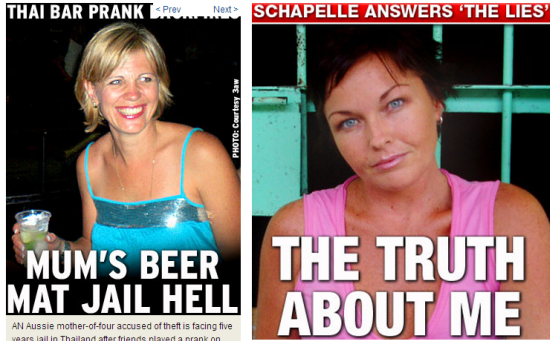 There’s something about overseas travel that makes Australians lose their inhibitions. Whether they get kidnapped, pinch a bar mat, get into a war zone (and demand frequent flyer points when the government evacuates them) or smuggle drugs in a boogie board bag, we like to leave more than just footprints when we holiday overseas. Like a criminal record.

The way the media tells it, the foreign minister is apparently personally responsible for all these events which accompany Australians’ 8 million overseas trips a year, and should telephone the leader of the country involved, change the laws of that country, etc, in order to secure the release of the culprit.

Well, some of us have had enough of cash-strapped DFAT bailing people out. The Lowy Institute’s Alex Oliver has this to say in Crikey today:

“When our political leaders keep upping the ante in high-profile consular cases, like evacuations from airports hit by strikes or lobbying to secure the release of an Australian from prison overseas after a foolish prank, they only make their own jobs harder … This can’t go on. For the price of a cup of coffee at the airport, Australian travellers should start to fund the services they increasingly say they need, and take more responsibility for their actions overseas.”

Oliver’s report calls for a $5 levy on all overseas plane tickets to help pay for consular services. If you’re silly enough not to take out travel insurance, fair enough. Hear, hear to the Schapelle tax — let those who can afford to go overseas pay a little more towards cleaning up afterwards.

And if you’re going to Thailand for Easter, please leave the bar mat where it is.

Over the 8 years and counting, of Australian stupidity and cowardice in respect of the strange tale of Schapelle Corby, Crikey isn’t the worst pig in the sty by any means, but today’s editorial sends you in that direction.

In due course, there will be a disclosure of what has happened to her, by whom and why, (a disclosure which many vested interests are keen to avoid of course) and on that day dear Crikey, I’ll be knocking on your door with a hard-copy print-out of this editorial.

Including Schapelle Corby in your trivial “idiots abroad” editorial does a great disservice to the legitimate concerns of many people about her guilt. A sad photo of Schapelle Corby next to another “idiot” who stole a bar mat is very poor taste.
The doubts about Schapelle Corby’s guilt increase with time and they were detailed in the very forensic 600 page Expendable Project. I haven’t read where anyone has tried to debunk this extensive research project and it’s unfortunate that a media organisation such as yourselves haven’t found the interest or resources to examine it and let we, the public, know if there’s merit to the claims.
A young lady’s life is at stake here and The Expendable Project has opened the door to some serious questions.

Let’s face it. Crikey have a position on Schapelle Corby, and it is to ignore the evidence and throw stones at her at every opportunity. Frankly, it is appalling.

Let no-one be under the illusion that Crikey is what it pretends to be. The material of The Expendable Project is authentic. The government cables are real. They show exactly what happened in 2004/5.

But all this is simply ignored, and replayed with the sort of abuse we see on this page.

Is this really want readers want? Does it not define the attitude of the editorial team here, and a rather clear alignment with smear journalism?