Parramatta Eels chairman Roy Spagnolo is taking on one high-profile supporter in a bitter war over the club's board. The campaigning from rival tickets last December is still playing out after season kick-off.

A war is brewing at the Parramatta Eels rugby league club between chairman Roy Spagnolo, a well-known identity in the Sydney and Griffith Italian communities, and Phil Sim, a journalist and media entrepreneur, over a satirical cartoon posted on Sim’s Eels supporters website.

Sim is also the owner of the Eels supporters’ website 1 Eyed Eel and was part of the ParraFirst board ticket in last December’s elections, which opposed Spagnolo’s Parra 4 Ever campaign (previously known as 3P) and included former star players Ray Price and Eric Grothe jnr. During the election many 1 Eyed Eel bloggers were critical of Spagnolo; one blogger posted a satirical cartoon depicting Spagnolo as a puppet master over fellow ticket nominee Grothe jnr. 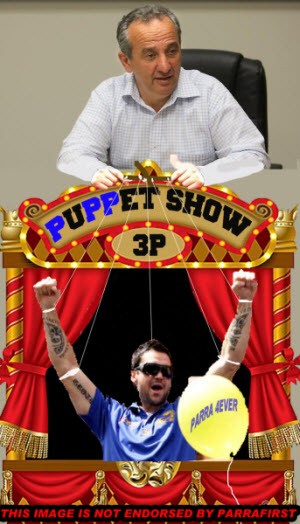 Bloggers also posted a link to a story about Spagnolo published in The Sydney Morning Herald in 2009 by investigative journalists Kate McClymont and Jacquelin Magnay. The Herald investigation uncovered at least eight property development companies in which Spagnolo had been involved that have gone into liquidation, allegedly owing the Australian Taxation Office significant amounts of money.

McClymont told Crikey Spagnolo had complained about the articles but had not pursued any of his complaints. “Those articles are now part of the public record, and any attempt to prevent people referring to them would be tantamount to hampering a free press,” she said.

The cartoon and link to the story is understood to have drawn the ire of Spagnolo, who then summonsed Sim to appear before the board of the Parramatta club. Sim wrote this on his website on Friday:

“I’ve been told that they are willing to hand me a suspended suspension on the grounds that:

“If I fail to do either the suspension comes in to effect.

“I’m furious. I simply can’t accept these conditions. As a journalist and media owner, you might expect that I’m incredibly passionate about freedom of speech and this would go against everything I believe in. When someone can’t even express an opinion via a satirical cartoon, it’s time to stand up and take a stand. So I’ll be telling the club that I can’t accept their terms and following through my legal options to take this to the supreme court.”

Now, 1 Eyed Eels supporters have rallied to assist Sim in his quest to have the decision reversed, starting an online petition demanding Spagnolo and other board members lift the suspension. The petition, which had 380 signatures this morning, states:

“The Board’s actions in suspending  Sim’s membership appears to be retaliation for content appearing on Sim’s social media website 1Eyed Eel. This suggests that it is attempting to stifle any discussion relating to the performance of the Board prior to the elections in May. It has wider ramifications for free speech and democratic elections in Australia.”

Parramatta ran last in 2012 and picked up the dreaded wooden spoon for the first time in its 66-year history. The team has lost two of its three games so far in 2013. Spagnolo’s board has made some strategic signings to turn the fortunes of the club around, including the appointment of Nathan Tinkler’s right-hand man at Hunter Sports Group, Ken Edwards, as CEO and former State of Origin coach Ricky Stuart as head coach.

Fight for footy board: the dirty tricks and death threat

The Eels and Sharks swim in murky waters

Why the Parramatta Eels need to win

Spagnolo’s not from Terrigal as well, is he?

The last time I looked he suspiciously looked like Stephen Conroy. But Spagnolo is from Western Sydney so that can’t be right as the Libs have that all sown up.