The transcript and audio of academic Marcia Langton's recent Boyer Lectures has been altered to remove her querying whether environmentalist Tim Flannery is "provocative and racist".

Indigenous academic Marcia Langton’s inflammatory comments suggesting Tim Flannery is a racist have been expunged from her Boyer Lectures, after lawyers deemed them potentially defamatory.

Flannery was unaware the passages had been removed from the speech and told Crikey he “would be interested to know if that constitutes an apology or not”.

In her fourth Boyer Lecture on how mining has helped Aboriginal communities, which was broadcast on Radio National in December, Langton said:

“Did Flannery intend in this statement to be provocative and racist, asserting wrongly that mining would automatically occur in this area because of the transfer of title to Aboriginal people? Or, has he succumbed, unwittingly, to the environmental campaign ideology, that Australia’s first people are the enemies of nature? I don’t know which answer is the sadder. Such an intelligent man, and yet this is not the only instance of his misrepresentation of Aboriginal people in his published works.

These paragraphs have now been removed from the ABC transcript and audio of the speech (although the first paragraph remains on the Fairfax extract online). The ABC confirms the excisions, with a spokesperson telling Crikey:

“For consistency, and in keeping with the final book and final CD to be published later this month, the transcript and audio have been edited. A note to this effect has been added to the online transcripts.”

Crikey understands the changes came because HarperCollins, the publishers of Langton’s upcoming book and audio recording of the Boyer Lectures, were concerned about the defamation possibilities after seeking out legal advice. Langton also wanted to make a few minor edits to the lectures before the book was published, so the ABC transcript and audio was edited to reflect those changes.

Flannery, a former Australian of the Year, says he’s unfazed by Langton’s comments — “I just thought it was self-evidently untrue” — and he hadn’t asked for their removal, nor had any contact with Langton about them. So far Langton has not replied to Crikey‘s query on whether she stands by her comments.

But judging by her recent Twitter conversation with fellow academic Dominic Kelly, a PhD candidate and politics tutor at La Trobe University, Langton doesn’t believe she accused Flannery of racism: 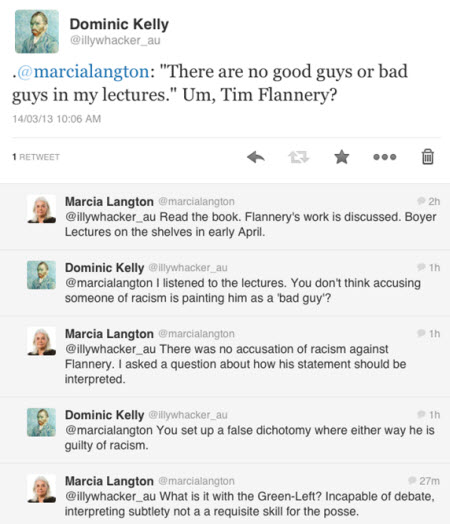 Crikey revealed last month Langton had omitted to disclose her funding from mining companies Rio Tinto and Woodside despite the theme of her five speeches being “The Quiet Revolution: Indigenous People and the Resources Boom”. Flannery told Crikey Langton’s mining linkages concern him and he believes there should be a series of guidelines for disclosure on academic funding.

The prestigious Boyer Lectures are run annually by the ABC, with the book of the speeches due to be released on Thursday.

This is hardly the first time Langton has bandied about the racism charge and other insults and then tried to pretend it didn’t happen. Her denial that she called Flannery a racist is clearly an evasion when she is quoted presenting a binary dilemma between him intending to be racist and him viewing “Australia’s first people are the enemies of nature”. She can protest all she likes but she can’t possible defend that comment and its proper that the lawyers removed it.

But I had to laugh at her “incapable of debate” retort because of the sheer lack of self-awareness she must have to say that. I mean, her approach to debate is far too often the antithesis of the charitable principle where you draw forth the strongest and most decent representation of the other side and deal with it on those terms. Indeed, she is quick to assign the basest motive to her interlocutors, often with glib insults and generalisations, which is a serious failing in an academic.

I mean, check her twitter history and there are plenty of other examples of similar generalisations, venomous, emotive hyperbole and righteous indignation. It’s certainly demonstrative of someone who has difficulty parsing ideas and engaging in challenging dialogue, when it isn’t preloaded with all her assumption-ladden oblique framing.

A little temper can be tolerable if its not reflexive and its channelled productively, but Langton needs to understand that you can’t just go around smearing everyone who disagrees with you and expect to be taken seriously because you do good work.

OK so appreciate Crikey for this. Marcia Langton has been my pin up girl for years, and now she has been bought by the mining companies? It is terriblky, terribly believable. I will give you something else: the ABC 9(and whoever else) tell us we must have an expanding, growing Australian population and economy intertwined with whoever comes. At the end of this fascinating doctrine, in a decade or less, the maths will drive us into abn ecopnomic black hole from which there will be no escape. Not enough resources, too many people, too much interdependence, and a wild card comes from apparently nowhere, and the whole lot collapses in starvation and war. Please Crikey, time to unbutton the conventional wisdom that growth is good, even exponential growth.

and thank Asgard for the wayback machine called the intertubes where nothing is lost.

The idea of debate on twitter is ludicrous. Or should we now be capable of stating a case in 140 characters? Easier to resort to labelling, name calling and abuse.