Moving house? Is it true the Newman government is set to “move sections of the state government offices into corporate buildings to be funded by ratepayers while government buildings are to be left empty with no tenants”? We’d like to hear more about which departments are being shifted and which building they are moving to. If you know more, send us an email.

What a merger. Interesting news today that La Gillard is merging the Industry and Climate Change departments. Talk about putting the fox in charge of the henhouse! Any DCCEE bureaucrats like to tell us what they think of the move? Talk was that DCCEE might be merged with Resources, Energy and Tourism, but that hasn’t happened. Seems like this merger will come as a surprise …

Friendly fire from Young Labor. An op-ed in The Australian by Australian Young Labor national president Kerrie Kahlon savaging Stephen Conroy for “pursuing a regulatory act that would breach fundamentally the liberal ideal of a free press” has set the cat among the pigeons. There’s a rumour doing the rounds that Ron Paul fanboy Chaiy Donati wrote the piece, but we rang Kahlon, who said she wrote the piece herself.

This Labor mole is standing by Kahlon:

“At Australian Young Labor Executive last week, the Right and the Left joined together to put a gag order on national president Kerrie Kahlon after she defended our freedom of speech. The gag order was pushed in backrooms by other QYL who claim to belong to the same faction as Kerrie but publicly condemned her for merely speaking her mind. It’s these cushy staffers from the Queensland Right that practice backroom deals to gain power at all costs, that’s what’s really destroying the Labor brand. I am proud of Kerrie and I hope that some disaffected Labor voters read her article and see that integrity is not dead within the party.”

Crikey confirmed the executive did try to gag Kahlon, passing a motion she had to seek approval before speaking publicly if what she was saying was not guided by the party platform. It’s understood she responded by acknowledging the need to support the party platform, but defended her right to have an opinion. Given the way Conroy’s botched media reform process ended up — the main bills were quietly dumped after helping to spark a disastrous leadership spill — Kahlon’s article seems sensible indeed.

Keeping it in the party. Interesting to see Victoria’s City of Greater Bendigo sponsor a pre-election speech by Liberal frontbencher Malcolm Turnbull. Is this anything to do with the fact that the mayor, Lisa Ruffell, is a former Liberal party member and unsuccessful Liberal candidate at the 2002 state election? 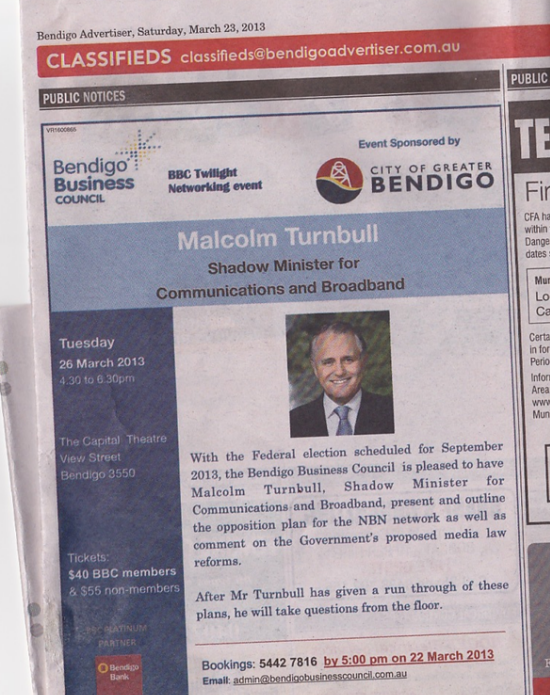 What, no footy? A caller to 3AW this morning reckons all staff at a certain bank were told they were banned from using work computers to do anything to do with footy tipping, Super Coach or Dream Team. How un-Australian! The Crikey bunker is not very into footy tipping, but if we were banned from it, no doubt we’d insist on giving it a go.

A paid-up punt. We told you last week about Sportsbet refusing to pay out to those who bet that Julia Gillard “would win the next Labor leadership ballot”. Sportsbet reckoned there had been no ballot last week, so Gillard did not win (anyone who had a punt could at least void the bet). But our tipster has updated us: “Thank you for running my complaint … regarding Sportsbet — they have now paid up!” Let us know how you got on with betting on the leadership — is our tipster the sole beneficiary, or have others also won big?

Campbell Newman, the Liberal that never was