The choice of party leader is far too important to be left to parliamentary politicians alone, and other political issues of the day.

Changing leadership election rules. If there is one lesson political parties should have learned from the latest leadership nonsense, it’s that the choice of party leader is far too important to be left to parliamentary politicians alone. The British Labour Party model combining votes from parliamentarians, affiliated trade union members and the party rank-and-file should be introduced ASAP.

The verdict hardly encouraging. With the prospect of a Kevin Rudd Labor leadership takeover now seemingly gone, there has been quite a slump in the prospects of the government hanging on at the next election. As measured by the Crikey Election Indicator based on market prices, the probability of a Labor win is now down to 14.7%. At the end of January the figure was 26.9% 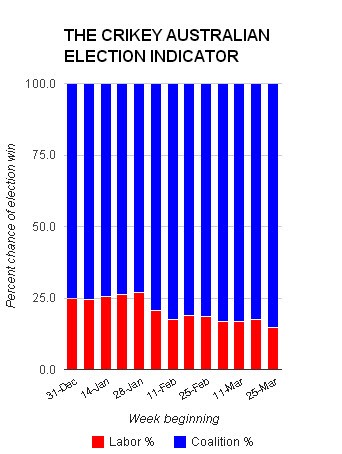 And there is still some scepticism about Labor’s leadership problems being over.

Back to the hard hats and children. Julie Gillard did not wait long after being free of the parliamentary shackles to return to the fluoro vest and hard hat. 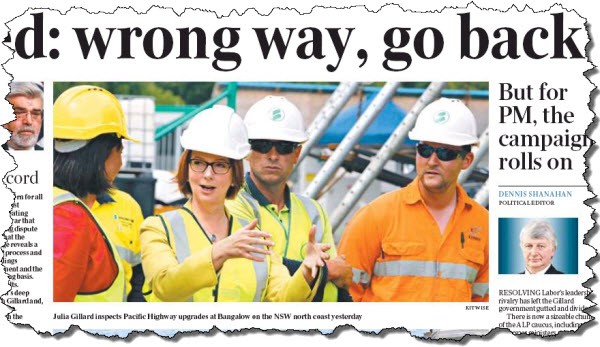 And then it was on to the children and a very public demonstration she could be tolerant of misogynists after all. 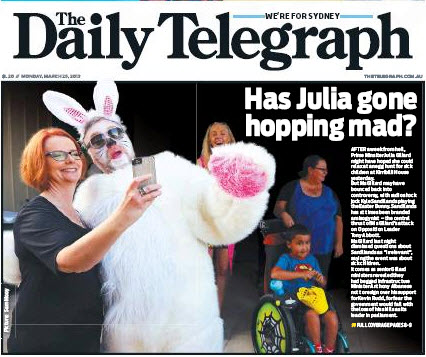 Lobbying the bureaucracy. It is unusual for the methods big business uses to l0bby governments to be subject to public scrutiny, but the bankruptcy of American company Enron has enabled two American academics to do just that. Senior fellow and visiting professor Lee Drutman and assistant professor of government Daniel J. Hopkins at the Comparative Legislative Research Center of the University of Iowa obtained access to more than 250,000 internal e-mails from Enron that enabled them to observe its political attention between 1999 and 2002. The study has now been published, and there is no dreaded paywall! The full text is well worth the read, but there’s a convenient summary on the Washington Post’s Wonkblog. Here’s a taste from the conclusion:

“In studying the attention Enron devoted to various political activities through its e-mails, we find very little evidence consistent with the transactional approach to political influence. Election-related e-mails make up only 1% of Enron’s political e-mails — and even within that 1%, there is scant evidence that Enron’s staffers considered themselves to be buying the support of candidates. Instead, we observe Enron’s political attention to be focused primarily on monitoring and formal participation in rule making and other executive-branch proceedings. Of the emails, 51% focused either on the executive branch (10%), administrative agencies (22%), or advisory commissions (19%) — more than three times the 15% that focused on legislative contacting. Such observations lend descriptive support to the conception of lobbying as engaging in the day-to-day policy details of Washington. The heavy emphasis on formal participation and providing policy information is consistent with theories that view lobbying as information transmission, with influence deriving from making a compelling case. Certainly, Enron had the capacity to make political contributions, and it did so. But perhaps its greater resource was its monopoly on policy-relevant information about electricity, natural gas, and communications markets, information that policy makers could not easily obtain elsewhere. The frequency of monitoring, the large number of legislative meetings, and the special attention to members of energy-related committees in Congress suggest support for a view that treats lobbyists as allies of lawmakers and their staffs as well. Studying influence in politics is notoriously difficult and business influence especially so. But by making extensive use of Enron’s internal documents, this article can extend the insights of survey-based research by observing where the firm directed its political energies and attention.”