Crete, Cyprus, what's a few hundred kilometres, a banking crisis and a minotaur or two?

Crete or Cyprus? Gerry’s not sure. Mark Latham often tells Crikey readers about some of the errors of fact and other bloopers by Gerard Henderson, the upholder of accuracy and all things right and proper for the rest of the Australian media. So what are we to then make of this fox paw from Gerry on the ABC’s Insiders yesterday? “The current discussions in the eurozone about how to handle the latest basket case — namely crate, Crete — serves as a reminder that the crisis is far from over.”

If the man were half-informed he wouldn’t make such a silly mistake. Crete is an island that is part of Greece; Cyprus is independent, closer to Lebanon and split between Greece and Turkey. Crete was in effect bailed out in the 2012 second rescue of Greece itself. Crate, Crete, it’s all a bit Cyprus to me. — Glenn Dyer

Video of the day. Around 10 minutes after London mayor Boris Johnson finished his interview with the BBC’s Eddie Mair (The Guardian has the highlights) it was already being called the “Sunday morning massacre”. Boris had come on Sunday morning politics/culture chatarama The Andrew Marr Show to do his usual loquacious schtick, partly about a film made of him during his mayoral years. But Marr isn’t running it at the moment, busy recovering from a serious stroke, and in his place was Eddie Mair, a BBC Radio 4 presenter (of PM) lately transferred to TV.

Mair has a whimsical, slightly phlegmatic style, which he deploys like a mongoose going to work on a snake. Five minutes in, Johnson got bailed on every screw-up in his spangled career. From being sacked by The Times for making up quotes — he claimed it was sandpapering, making a quote conveniently acute, but it was rather more — to getting chucked out of the shadow cabinet for lying about an extra-marital affair, leading up to the big one: the time he promised an old Etonian friend (named, inevitably, “Darius Guppy”) he would provide him with the address of a fellow journalist so Guppy could have the journo’s legs broken.

No such incident occurred, and Johnson has always claimed he was humouring his drunken friend. The tape of the conversation and transcript suggest otherwise. By the time Mair hit him with this incident, Johnson was floundering, the old shambolic act looking desperate and affected. In vain he tried to get the conversation back to political flim-flam, before Mair says “you’re a nasty piece of work, aren’t you?” — at which point Johnson looks like a let-down bouncy castle. 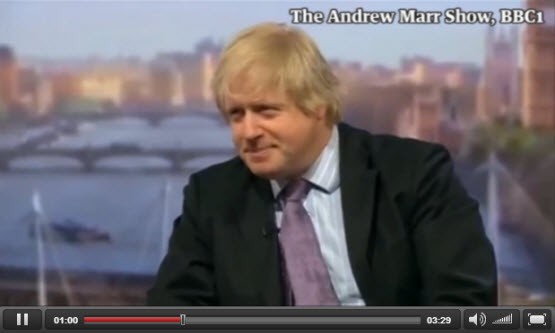 You don’t have to be subject to Johnson’s mayoralty to find the whole thing delicious. Indeed, this may be the week when it all turns for Johnson. Londoners have just found out they will be paying 600 million pounds to refit the Olympic stadium so West Ham can make it its home ground. Not Johnson’s fault — the deal was done in 2006 — but many suggest he could have got a better deal on the back end. Ditto for his lunatic East London “airline”, a cable car across the Thames at Greenwich. Part-subsidised by an airline that I will not name, the money was in exchange for the company’s name appearing on the famous Tube map, thus despoiling a public icon. Amazingly, tourists don’t want to go from Greenwich to … nowhere, and locals have no need of it. It is said to be losing £50,000 a week.

Ironically, Johnson is famous for getting caught halfway along a “dangle wire” during the Olympics, hanging mid-air for half an hour like an offal pinata. With today’s interview, he must have got a taste for the feeling. Johnson’s political consigliere is Lynton Crosby. Crosby, not great, mate. — Guy Rundle

Front page of the day. If readers were in any doubt, News Limited regional daily The Cairns Post clears it up for them today with its front-page wrap-around: they’re for Cairns. Inside, editor Neil Melloy says the initiative “aims to shine the light on what makes our city and the Far North so great”. 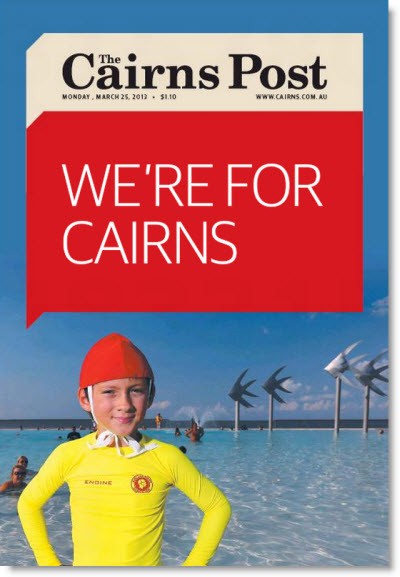 Abbott needs to face the media

Should public servants ever express their personal or political views in public?

Bless you, Guy Rundle, for sharing that video of Boris. Usually he can bluster his way through anything, bamboozling an interviewer with his particular Billy Bunter style of charm.

You’re right about Mair: a deft display of mongoose vs snake.

Someone in the media treating a malignant buffoon the way they deserve? Is it catching?