Time for the Coalition to step up as an alternative govt

After last week's Labor debacle, it's time for the opposition to step up and present its credentials as an alternative government. If they want an election, they have to put their cards on the table now. 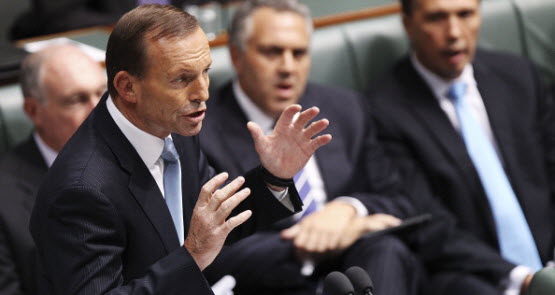 “It’s time for the independents to examine their consciences and to speak to their electorates over the next six weeks about whether they want the faceless men of the Labor Party choosing the prime minister,” Liberal frontbencher Christopher Pyne said.

After last week’s farce, surely, the opposition has a point. Julia Gillard may remain prime minister, and thus her agreements with Rob Oakeshott, Tony Windsor and the Greens remain in place. But at some point the crossbenchers must give consideration to whether the national interest is served by going to the polls ahead of schedule.

According to the opposition, then, we should be mere weeks away from an election — indeed, we should be in an election campaign now, if they’d had their way last Thursday. Moreover, it’s only a few weeks since the opposition argued we were in “virtual caretaker” mode courtesy of the Prime Minister announcing the date of the election.

All of which prompts the question: if the opposition wants to be taken seriously on this, why isn’t it releasing its policies? They are, we are told, all costed and ready to go. Savings measures are locked down, tax cuts prepared and a small number of spending initiatives ready for an alternative government that will “under-promise and over-deliver”.

If we’ve reached some sort of watershed moment in the course of this hung Parliament, as the Coalition suggests, then it’s time the Coalition moved on from being the relentlessly negative opposition it has so successfully been, and demonstrate that it is an actual alternative government with a credible economic plan. In particular, how the Coalition resolves the tension between Joe Hockey’s insistence on fiscal rigour and Tony Abbott’s “everyone comes out ahead” magic pudding approach to the budget is of critical importance in terms of economic growth over the next 24 months.

What reason does the Coalition have to be reluctant? Fear of a revitalised Gillard exploiting their sudden boldness? Seriously? It might also be of benefit to Coalition ministers, who have in effect been banned from discussing policy for two-and-a-half years while Abbott effectively prosecuted the case against Labor. Once elected, those atrophied policy skills will have to be deployed.

You can’t govern by relentlessly bagging the opposition, not if you want to get anything done. Shadow ministers having to actually talk about policy, explain, justify it, address the occasional subtlety or counter-intuitive feature, all will improve the performance of a Coalition government once it gets underway.

The alternative, as Labor has demonstrated, is that a refusal to discuss policy when in opposition becomes an inability to sell policy when in government.

With toxic Kev and a compliant media, why do the Libs have to work, do or sell anything? They are doing the most efficient thing by simply waiting for the plum to drop and gain office, which they will.

Thanks to unbalanced “churnalists” providing unbalanced, negative and mostly untrue “facts” to the rest of the unbalanced that purchase, see or listen to the kaka supplied by the MSM , is it any wonder that anything positive sees the light of day at all?
Thankfully, overseas investors don’t listen to, or read the local rubbish and the overseas press are able to recognise real issues from thousands of miles away that dribbling idiots in the same gallery miss.

Bernard, you ask why the coalition won’t release it’s policies! That’s a bit disingenuous. Probably because the media hasn’t bothered to ask them.

My feelings are that the LNP want to rush an election so that there is insufficient time for analysis of their policies. If the voters are made aware of whats up Abbott’s sleeve they will run a mile. Fat chance of that though.

You can carry on like they are – if you want to hide what you plan to do?
For fear of spooking the chooks?
What is “scrutiny”?
Howard was allowed, aided and abetted, to get away with it.

Read the Liberal manifesto – Real Solutions for all Australians

No mention of where the money from the budget will come from to pay for Direct Action, tax cuts etc