Julia Gillard has shuffled the cards in her ministerial deck to cover the loss of some of its most talented and experienced members. 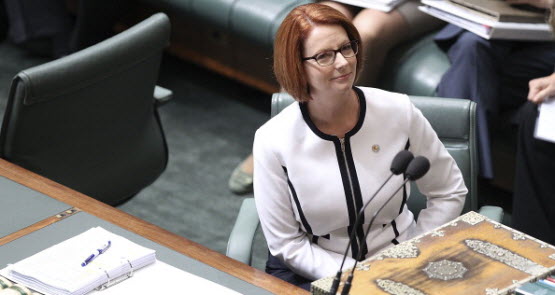 Julia Gillard has announced a ministerial reshuffle that rewards her supporters and makes some significant machinery-of-government change in Canberra.

The key changes are:

This is a mixed reshuffle. There is sense in ending the indulgence of having Regional Development as a separate portfolio and returning it to the Transport portfolio, and in moving Climate Change into Combet’s portfolio now that its core work of developing and implementing a carbon pricing scheme is completed. The resources sector, too, will be delighted to have replaced one industry spruiker, Martin Ferguson, with another, and the promotion of Leigh will lift the frontbench’s average IQ.

But the Arts sub-portfolio continues its peripatetic history; the combination of Higher Education and Trade for Craig Emerson — what used to be two full-time ministerial jobs — is bizarre and the shameless promotion of pro-Gillard powerbroker Don Farrell illustrates this is ultimately about ensuring those who did the right thing by the Prime Minister last week are rewarded.

Meanwhile, in Rudd, Bowen, Carr, Ferguson, Crean and Ed Husic, Labor will take one of its most talented-ever backbenches to the coming election.

Rudd reshuffle: a win for talent… and factional allegiances

Jan McLucas, a truly nice person, now gets to shepherd the NDIS, which she worked on with Bill Shorten.

Bernard, Gillard is not shuffling cards, she has reassigned deck chairs on the Titanic. Lets face it, the ship is going down. Nothing can and will save it. Humphrey B Bear with a blindfold could beat Labor

Talented maybe, but also treacherous, and without a doubt a major reason why caucus is dysfunctional and policy prosecution and implementation woeful.

Where’s Conroy going – creator of such memorable events as “Senator Fielding” and “Media Reformation”?
……… He is going isn’t he?

Well, at least promoting Gary Gray should appease the business mining lobby and thereby muffle predictable whinges that JG has “rewarded” loyalists to some extent.

The angle of the story here and in the MSM should have been that JG was forced to clear the decks after another abortive toxic Rudd coup attempt and that she had made the best appointments she could have made with the deck she was given.

It wasn’t as if she hadnt had a history of appointing Rudd or his supporters to the highest levels of government,despite Rudd’s leaking sabotage of the Government in 2010.

If I was in her shoes, I would have scorched earthed the toxicity of this man and his supporters from the get-go straight after the election and saved myself a whole lot of paranoia and trouble with cabinet leakings and the like. In the end JG proved to be too nice.