Labor is now a bitterly-divided party with considerable talent sitting idle on the backbench and a huge defeat looming. The main question is will Tony Abbott win both houses of Parliament? 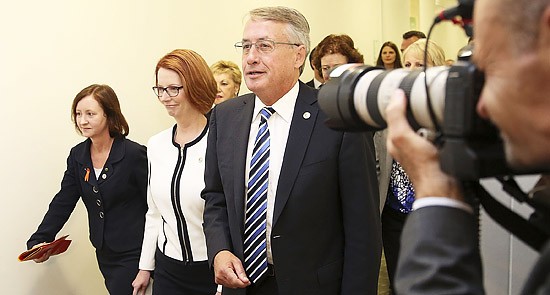 This just keeps getting worse for Labor. After yesterday’s shambolic spill-that-never was, the exodus to the backbench is now ripping some of the party’s best talent and experience out of cabinet. The resignation this morning of Chris Bowen, one of the government’s best talents, means Labor will take one of its strongest-ever backbenches to the election, with former leaders Kevin Rudd and Simon Crean, Bowen, younger figures like Richard Marles and Ed Husic and whichever other Rudd supporters are pushed or jump in the next few days.

Joel Fitzgibbon will also resign or be dumped as party whip, but that’s a case of good riddance from both sides.

Rather than use his gifts in an economic portfolio, Gillard gave Bowen the unenvied task of addressing the growth of asylum-seeker boat arrivals. He crafted an excellent policy response, the Malaysian Solution, the defeat of which by the High Court and asylum seeker advocates opened the doors to a surge in arrivals and, eventually, a return to the Pacific Solution so hated by Labor.

Bowen was also a long-term advocate of substantially increasing Australia’s humanitarian intake, a position vindicated by the Houston Panel and one he was finally able to implement. Typical of the demonisation of asylum seekers by the Coalition leadership, Tony Abbott and Scott Morrison are now committed to reversing Bowen’s expansion of the humanitarian visa category

This flow of talent to the backbench is not necessarily all bad for Labor — there will now be a substantial core of ministerially-experienced figures unconnected with the Gillard camp able to lead post-Gillard Labor, assuming they hang on to their seats in the landslide defeat the ALP is headed for. But the impression — correct impression — now is of a party bitterly divided and unable to get its act together.

“When journalists start pounding the leadership drum again, Kevin Rudd, notionally, is out of the contest … attention will turn to Stephen Smith or Bill Shorten.”

Labor could perform a miracle. Few expected Abbott, winner by one vote in a deeply-divided party, to be the enormous success he has been. Voters might get sick of the sight of a bunch of blokes — in Parliament and in the press gallery — trying to tear down the first female prime minister. But Labor isn’t in opposition where it can refine its message down to saying no to everything and promising to stop everything, and voters are more likely to regard the party as a rather shabby farce than admire yet another demonstration of the Prime Minister’s remarkable toughness.

But failing such a miracle, the leadership drumbeat will resume again in coming weeks. This stuff from both the Gillard and Rudd camps that the leadership issue is resolved is either naïveté or wilful deception. The media is too addicted to the subject to let it drop. Labor’s primary vote is too low for MPs to stop wondering what they should do.

And the government’s immediate priority is to craft a budget that will struggle to achieve a surplus and which is intended to carve out substantial savings to pay for NDIS and Gonski. It will be the exact reverse of a pre-election spendathon and is likely to generate hostile responses from those targeted for savings.

When journalists start pounding the leadership drum again, Kevin Rudd, a man unwilling to enter the fray when others were risking their necks for him, the man who went from Ruddmentum to Ruddversal, notionally, is out of the contest: all seem united in saying he will never be leader again, including Rudd himself. He issued this statement this morning: 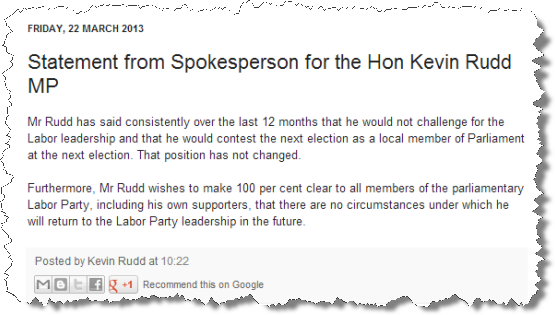 Rudd has been dismissed before, though he may have his eyes fixed on September 15 and taking over the job he has done most successfully, leader of the opposition. More likely, with Simon “safe pair of hands” Crean in exile, attention will turn to Stephen Smith or Bill Shorten. And, most certainly, the steady drip of bad polls will continue.

Abbott must not be able to believe his luck. From not long after he became leader, this deeply flawed man has been able to sit back and watch his opponents at each other’s throats while his own party locked in behind him with remarkable discipline. It almost delivered him power in 2010. It will certainly do so in 2013, and may even hand him control of the Senate as well, enabling him to remove the carbon price, the mining tax, and every other achievement of the Gillard government, wiped from the statutes as though they never existed.

Hi Bernard, I know it is hard to get this through to you but is there any chance you can pull yourself away from the light and start doing some serious journalism rather than puff piece speculation. Can’t wait for drmick to give you a serve. PS: I thought your twitterthon on the spill yesterday was gringeworthy.

This Crean moment of madness doesn’t change the basic calculus that Rudd is by streets the most electable politician in the country, and that the current Gillsrd senior cabinet is deeply and widely hated. Whining about the press or leaky Rudd backers for this situation doesn’t change reality.

The Labor caucus still has a couple of months to work it out.

Whining about the press? it is the press that won’t shut up about this. How about telling us readers about what we really want to know. What are our pollies trying to get done, success stories (there are some). And Rudd would not have won the election in September if he had stepped up. That is why he didn’t do it. He is waiting for Gillard to fall on her sword post election.

I guess the upside it that a term of first-hand experience with the crazies running the Coalition might do the electorate some good, and a good cleanout of Labor might do that party some good.

I guess the upside is that a term of first-hand experience with the crazies running the Coalition might do the electorate some good, and a good cleanout of Labor might do that party some good.