Richard Farmer’s chunky bits: a croc and a crock

Australian politics has come to a pretty pass when a politician is ridiculed for having told the truth. Kevin Rudd and Simon Crean, each in his own way, has suffered from this strange phenomenon since yesterday's challenge that wasn't.

So you thought Stephen Conroy’s plan was repressive. Indonesia’s House of Representatives is due to start considering next week proposed changes to the country’s criminal law. And if you thought Australian Labor’s proposals for making the press accountable were draconian, then have a read of this from the Jakarta Post: 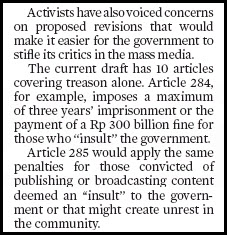 Visitors to Bali might care to note that another proposal is to increase the maximum sentence for adultery from nine months to five years.

Another step towards Aboriginal recognition. Worth noting from today’s edition of Adelaide’s innovative InDaily (a related if not exactly sister publication of Crikey’s) is Liam Mannix’s report on constitutional recognition passing state parliament, which notes that “South Australia’s constitution is contained in legislation, rather than as a separate document, so no referendum is needed to amend it — unlike the national constitution”.

The new law, passed through both houses with unanimous support, recognises the state’s Aboriginal people as South Australia’s First People. It inserts the following wording into the State’s constitution:

“Parliament on behalf of the people of South Australia:

(a) Acknowledges and respects Aboriginal peoples as the State’s First Peoples and Nations;

(b) Recognises Aboriginal peoples as the traditional owners and occupants of the land and waters in South Australia and that:

i. their spiritual, social, cultural and economic practices come from their traditional lands and waters;

ii. they maintain cultural and heritage beliefs, languages, and laws all of which are of ongoing importance; and

iii. they have and continue to maintain a unique and irreplaceable contribution to the State;

(c) acknowledges that the Aboriginal peoples have endured past injustice and dispossession of their traditional lands and waters.”

A croc and a crock. A survey of this morning’s press and the NT News gets the balance right again.

A final winner. He went down fighting yesterday till near the end with these tweets. The last Crikey Leadership Beat-Up Award goes to:

Ridiculed for truth telling. Australian politics has come to a pretty pass when a politician is ridiculed for having told the truth. Kevin Rudd and Simon Crean, each in his own way, has suffered from this strange phenomenon since yesterday’s challenge that wasn’t.

Crean had the temerity to warn his colleagues that Labor under Julia Gillard was facing inevitable defeat but that chances would be better under Kevin Rudd. Nothing very remarkable, I would have thought, about that statement. Just an experienced elder statesman of the party believing he should at least try and avoid disaster before it was too late. He failed because his common sense failed to spur his caucus colleagues into stampeding away from supporting Gillard.

And Rudd simply did what he said last February that he would do. He would not challenge because, until Gillard made her position vacant without him moving for it to happen, there was no overwhelming majority drafting him to take over.

The coup capital of the world. I notice the BBC is nominating Australia as the coup capital of the world and the list of leadership challenges, federal and state, does provide plenty of evidence that, in the words of its correspondent, “Australia has one of the most brutal political cultures in the democratic world, in which party leaders are dispatched with abandon”. Searching for the reason the report came up with this:

A fixation with public opinion polling exacerbates the problem. Because of the attention lavished on them, Canberra makes a mockery of the political cliché that “there’s only one poll that counts”.

Indeed, weekly polls published by Fairfax newspapers (The Sydney Morning Herald and the Melbourne Age) and The Australian have become major news events in their own right.

And in a country not exactly awash with breaking news, they regularly dominate not just the front pages but also the radio and television bulletins.

“Comes the moment – comes the man”?
PVO on behalf of the “Lemming Press” – so obssessed with self-justification and their own infallability – no room for self-doubt, the possibilty they could be wrong – arranged against Labor and Conroy with his half-baked “Fieldingesque Media Reformation Laws” – that they weren’t letting anything else out of Canberra (’til it happened?) – everything right according to him/them?
…. Except “the candidate” – not prepared to stand for their “benefit”?
Again “Pretty Vuckin’ Ordinary”?