A daughter tells of a life of pain, and a welcome apology

Angela Barra tells the story of her own forced adoption, and explains what it was like to be present, with her mother at her side, at the Prime Minister's historic apology yesterday. 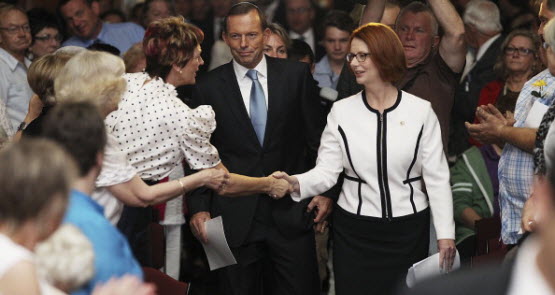 I knew her voice, her smell and her taste. I would have sensed when she was happy, stressed, distressed and frightened. I didn’t know that she had been punished for my existence — I was part of her and vice versa. We were in tune with each other — in sync, our hearts beating together. We coexisted and nothing could tear us apart — we were mother and child, the most sacred of bonds.

She heard me crying for her, yearning for her comfort but we could not find each other. Where did you go? Why can’t I hear you, taste you, smell you and feel you? Why did you abandon me? What did I do that was so wrong that you could leave me and put me in the hands of strangers?

This will be my first lesson in love and trust. To love is to be abandoned waiting aimlessly somewhere in the confines of the hospital. Sometime later, close to a month later, a small administration fee will be paid and I will be placed in a new home, a home where I am most certainly wanted.

My name is Angela Barra and I am a survivor of forced adoption. Over the last two years I have reunited with the families of both my natural parents. It was never easy finding my natural fathers’ family because my records were filled with fiction. It took me over 20 years to find him and I was blessed to share 10 precious months with him before I watched him die of aggressive lung cancer.

I found out that when my biological mum gave birth to me in 1967 in Brisbane she was under sedation and forced to sign the adoption papers. She was not advised of her options or rights. She went back for me screaming “give me my baby back!” She was told I had been adopted but this too was not true. My limited and erroneous records reveal that I was still at the hospital waiting to be adopted. I now know that the words of my adopted mother, “your mummy must have loved your very much to give you away” was unknowingly not true. She was forced.

So, whilst I gained a magnificent adopted family, this was at the expense of being with my natural family and the emotional wellbeing of my adopted mother and myself. My adopted parents died when I was in my 20s. I know that they would have been horrified if they lived to understand “forced adoption”. It breaks my heart that my adopted mother did not live to gain a greater understanding about why we had such a complex relationship.

We now know so much now about adopted children and the issues many of us face. It was automatically assumed that we would just assimilate into a new family seamlessly. Well I didn’t and I now know that my story is not an isolated case.

Yesterday I stood proudly alongside my biological mother — who I now call mum — in Canberra to hear the historic national apology. It was a monumental occasion to be sitting next to my mother listening to Prime Minister Julia Gillard give an authentic and informed apology. Mum and I were both impressed, and you could tell by the response of other people affected by forced adoption that they were elated when she actually acknowledged the harm by talking about the loss of lives to suicide.

The emotions in the room were palpable. Gillard used the word illegal, which we were hoping for. Mum desperately needed to hear that word. And Gillard also made a commitment to concrete action by committing $5 million to expand support and mental health services.

It’s never going to be enough but it’s a start. There were more commitments made in the House of Representatives for other funding around education. We had a special invite from the Attorney-General to be in the House because I was part of the broader consultation with Professor Mushin, but we couldn’t go in because mum was too distressed after what Tony Abbott said.

He also used the term “birth mothers”. For the majority, the mothers and fathers consider themselves parents, period. That’s when the heckling occurred, when he used the term birth parents. For my mother, it echoed the judgemental and insensitive practices of the past.

Everything that Gillard achieved in terms of validating all the mothers, fathers, sons and daughters was completely eroded by Abbott’s speech. One of the recommendations was to bring broader public awareness around the coercive and illegal practices that occurred. If our Opposition Leader couldn’t even understand what happened and use the appropriate words, then what hope do we have of the broader community understanding?

I hope to continue to work alongside Origins, which I am a member of, Post Adoption Support Queensland and other stakeholders to hold government accountable to keep their promises at both a state and Commonwealth level. I will continue to advocate for family preservation and to scrutinise child protection measures that favour adoption.

I hope in time that I and other victims/survivors of forced adoption have access to a raft of appropriately funded services, and I’m particularly excited about the education component. I would like to say that in time we will all move towards healing but I am not sure this is realistic for all victims/survivors given the depth of the trauma.

Single motherhood not a ‘problem’

Stories from the mothers who had their babies taken away