From her 2007 election as deputy prime minister to the challenges from Kevin Rudd, Crikey maps Julia Gillard's political timeline ... 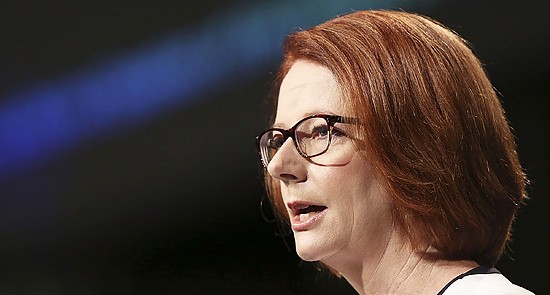 No matter what you think of her or her policies, Prime Minister Julia Gillard is a fighter. She’s challenged a sitting prime minister and won, held onto power during a hung Parliament, seen off two leadership challenges, called the Opposition Leader a misogynist in a speech that echoed around the world and implemented a stack of policies along the way. Crikey maps Gillard’s political timeline …

October 3, 1998: Gillard elected to the House of Representatives for the seat of Lalor.

February 13, 2008: A historic day; Rudd apologises to the stolen generation.

May 2, 2010: Rudd announces his intention to introduce a mining tax, called the Resource Super Profits Tax.

June 23, 2010: Night of the Long Knives. The “faceless men” of the Labor Party convince Gillard she must challenge Rudd. Rudd announces a ballot for the following morning.

June 24, 2010: Rudd does not stand in the Labor leadership ballot and Gillard is elected leader unopposed. She becomes the first female prime minister of Australia.

August 21, 2010: The 2010 federal election results in a hung Parliament. Gillard negotiates with the Greens and independent MPs Rob Oakeshott, Andrew Wilkie and Tony Windsor to remain in government.

November 2011: Peter Slipper resigns as Speaker after allegations of workplace s-xual harassment and an investigation into misuse of cab charges.

February 22, 2012: Rudd resigns as foreign minister, saying he doesn’t have confidence in the PM.

February 24, 2012: Rudd challenges Gillard on the Friday, saying he will call for spill on Monday.

April 29, 2012: Labor MP Craig Thomson suspended from the Labor Party, following allegations of a misuse of funds in his time as leader of the Health Services Union.

July 1, 2012: Australia introduces a carbon tax, a deal made with the Australian Greens during the time of the hung Parliament.

November 29, 2012: Gillard’s National Disability Insurance Scheme policy, a program that will cover 410,000 disabled Australians and will cost $15 billion a year, is introduced in to the lower house.

January 30, 2013: To end speculation, Gillard announces the 2013 federal election date will be September 14.

March 21, 2013: Gillard apologises in the Great Hall of Parliament House to Australian mothers and children who suffered from forced adoptions. Conroy’s media reforms are abandoned due to lack of support. After Creans calls for Gillard to hold a leadership spill, Gillard tells question time a ballot will happen at 4.30pm. At 4.20pm Rudd announces he will not be standing in the leadership ballot. No one else stands for the position of leader, and Gillard wins the ballot.

Day one of Rudd reboot: how it happened

Tough? or just obstinate? That kind of blind faith in oneself without regard to fact or evidence for the position being defended is Ayn Randian. It’s ‘smartest guy in the room’ stuff, and does the same damage as that wreaked by the Bush Jnr administration.
She belongs with Cheney and Rumsfeld and Wolfowitz – architects of the world wide disaster that was the first decade of the century.
She is politically inept and policy bereft. She cries out that the game is rigged against her and is prepared to burn the house down rather admit she has ever been wrong about anything. Here’s mysogyny for you: Swan is a girl. A whining, stamping, spoilt little princess without talent or principle.
Indefensible, the lot of them.

I dunno Rumpy, I thought the NDIS was quite a good idea!

I couldn’t find “Julia Gillard’s timeline”. All I see is a mass of poll results.
No mention at all of the over 490 bills that have been successfully passed in a very difficult parliamentary context, with an Opposition that has continued to falsely deny political legitimacy of the government. Not bad.

And have you seen the Brits debt as a % of GDP. Off the planet compared with ours even under Conservative control?

How about a Gillard Timeline with those achievements beside them.
Dreaming again. Too much like hard work, even for Crikey?

@CliffG I’m confused, the article only covers two polls (just before Rudd was booted and Gillard’s latest Newspoll) and the rest lists policy she has achieved such as the carbon tax, mining tax, NDIS, attempts to media reform etc.

True enough, Iggy. Here are the federal politicians who got behind this idea at the outset:
Rudd, Shorten, Macklin.
Latestarters: Gillard, Swan, Wong.
See Ann Manne article, The Monthly, August 2011.