Aussie scientists are wasting time chasing grant money, Canadian pollies are getting stuck into banks for lowering taxes, plus other political issues of the day.

Wasting time on grants. The article “Funding: Australia’s grant system wastes time“ in Nature this week is unfortunately behind a paywall, but the published abstract gets the message across:

“We found that scientists in Australia spent more than five centuries’ worth of time preparing research-grant proposals for consideration by the largest funding scheme of 2012. Because just 20.5% of these applications were successful, the equivalent of some four centuries of effort returned no immediate benefit to researchers and wasted …”

Reports the Globe and Mail:

“Flaherty made no apologies for his intervention. He insisted he was acting to protect consumers.

‘My concern for a number of years with very low mortgage rates is to ensure people can afford their mortgages when interest rates go up,’ he said.

‘It’s a concern for the Canadian people that they are careful and that they don’t assume the very low interest rates like we have now will continue indefinitely because they won’t. Inevitably, interest rates will go up.’

On the one hand, this … on the other, that. A certain caution among many of the political tipsters this morning as the decision hour for this Labor leadership race approaches the finishing line. A fear of being proved wrong competed with a desire to claim being right. It resulted in some confusing coverage that was perhaps best illustrated by the Melbourne Age. 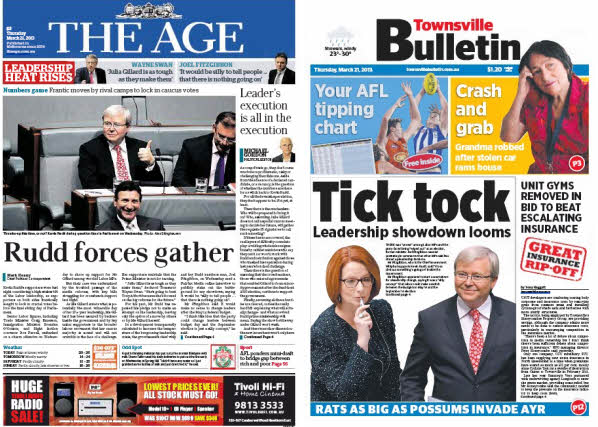 In the great tabloid tradition the one subject dominated page one. The headline had the Rudd forces gathering for a leadership tilt alongside a more sober commentary listing the good reasons why nothing would happen. A wonderful way of telling the readers absolutely nothing.

Up north, Townsville’s Bulletin made a bold effort to become Crikey‘s Leadership Beat-Up of the Day award winner, but I fancy there was more interest in the giant rat featured on page 12 than the Kevin Rudd on the front. 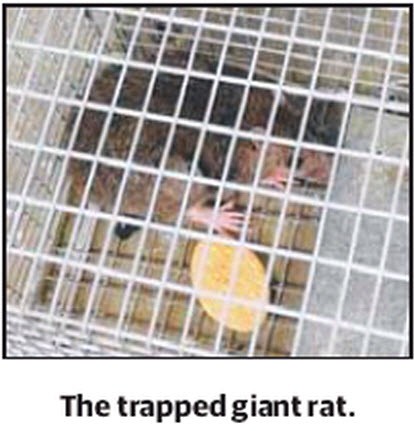 A quotation for the day from Dennis Atkins in the Courier Mail:

“There’s an old law of politics that’s brutally simple: if you’ve got the numbers, use them; if you haven’t, talk about using them.”

One for the NT News foreign news page. London’s Daily Telegraph reports a seven-foot-long alligator is on the loose in the south of Spain. The reptile is thought to be somewhere near the exclusive neighbourhood of La Madeira and was spotted near man-made lakes in the popular tourist region Mijas.

‘The largest funding scheme’ is the National Health and Medical RC. Another several centuries can probably be chalked up to the Australian Research Council grants process as well.