Simon Crean's impassioned speech this afternoon imploring Kevin Rudd to challenge for the Labor leadership took everyone by surprise -- most especially Kevin Rudd. 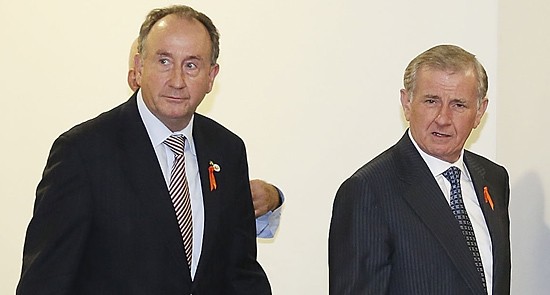 Rudd’s decision was based, he said, on a determination to keep his word not to challenge the Prime Minister or accept a return to the leadership unless drafted by an overwhelming majority of his colleagues.

In asking the Prime Minister to bring on a spill, Crean stated he had not consulted with Rudd — and the evidence of that was clear in Rudd’s response.

Crean has been sacked from his cabinet position and now joins Rudd on the backbench.

Chief Rudd spruiker Joel Fitzgibbon, who has been described as a “freelancer on a suicide mission” by Rudd camp sources, has said he would be “considering his position” as Chief Whip.

With Rudd declining to contest, Crean’s effort appears to have failed: the incessant speculation over Julia Gillard’s leadership may quiet for a time, but it is likely to eventually resume, with the media having demonstrated they are prepared to continue running leadership stories until parties respond.

The result is the overshadowing of what was a historic day in Parliament: the apology to the victims of forced adoptions in the Great Hall, where both Julia Gillard and Opposition Leader Tony Abbott made heartfelt, resonant speeches about the issue before hundreds of mothers and children torn apart by forced adoption policies.

This may well go down as “Crean’s gambit”, an attempt to short-circuit Labor’s leadership difficulties, incited by a media obsessed with leadership stories. Julia Gillard remains as Prime Minister, but Labor’s poor position in the polls — and a febrile media — also remain.

Today is a recognition that the ALP are facing at least three terms in opposition at a Federal level, no matter who’s the leader. I cant see Kev spending all that time as opposion leader so dont be surprised to see Kevin Rudd as the next Premier of QLD…

How naive we all were to believe that Labor actually wanted to defeat Tony Abbott. Morons.

The trouble is they are looking at Gillard and not on their party and social contract. They are little different politically than the Libs. except that Abbott is one of the slimiest lying …ts to grace the political stage.

The gap between the Gillard and Abbott camps widen – her’s are in Competent and his are in Tolerable?
We’re caught in the middle?

Gillards anonymous win as Leader again makes Abbott’s one vote win look weak.
Abbott was ranting that the minority govt “experiment” had failed. Given his level of honesty, integrity etc we can expect to see him immediately call another election if he finds himself a party to such a failed “experiment”.