The drones are coming: border protection fleet for Adelaide

They're 40 metres wide, can stay in the air for 30 hours, and are set to patrol Australia's borders -- with not a pilot in sight. The Triton drones are coming to Adelaide, reports InDaily's Liam Mannix. 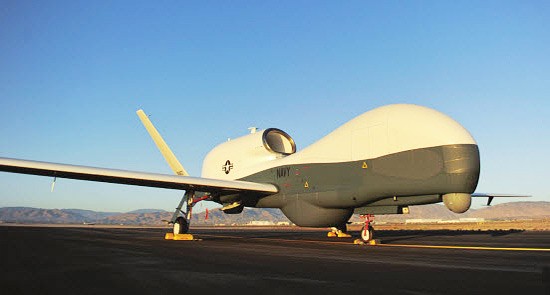 The drones are coming — to Adelaide.

The Royal Australian Air Force is expected to base a fleet of military drones at Edinburgh in Adelaide, using them to patrol Australia’s coast for asylum seeker boats. The drone fleet is likely to be made up of nine Northrop Grumman Triton drones (pictured), which have a 39.9 meter wingspan, can stay aloft for 30 hours and fly around 16,000 kilometres without needing to refuel.

The drones, roughly the same size as a Boeing 737, are expected to be in place by 2020, but significant logistical work is expected to occur well before then to prepare the base. It’s understood South Australian Minister for Defence Industries Jack Snelling was in Palmdale, California last month alongside representatives from defence contractors to talk to Northrop about the specifics of basing the Triton at Edinburgh.

Last year the ABC revealed details of the drone program, which is being driven by senior commanders in the RAAF and is expected to cost around $3 billion. Burns says Edinburgh has been chosen because it’s centrally located and Australia’s maritime surveillance teams are already based there.

“That’s where the expertise is in the maritime surveillance and patrol. That’s why the P3s are here … They can go east, west, south and north. They can deploy a drone out of Edinburgh, and it could touch down briefly in Darwin to refuel before it went on to do a task in the North West shelf,” he said.

Edinburgh has already been used by the US to run several Global Hawke missions. The facility has a runway capable of handling the large Tritons. And local advanced manufacturing capacity could easily be adapted to service the drone fleet, Burns says.

The Orion fleet currently patrols Australia’s maritime borders. In service since 1968, the ageing airframes are due for retirement in 2019. Defence’s program to replace them — called Air7000 — includes a fleet of drones that can patrol land, sea and the electronic spectrum.

Drones are better equipped for the “boring” work of watching for asylum seeker boats, Burns says. “They’ve got 30 hours of endurance. So they can go up off the north-west shelf and patrol the oil rigs, they can assist with the same things that P3-Orions are doing at the moment with illegal boats,” he said.

Another participant on Snelling’s Californian drone tour, Defense SA CEO Andrew Fletcher, was told the drones could be used for more than spotting asylum seeker boats.

“They just hoover up bucket loads of information from 60,000 feet,” he said. “Anything that’s broadcast — anything from radio messages, mobile phones, all the secret stuff that the military use from various countries, anything. It can gather any information that’s in the airwaves.”

Order in the house

The govt agency that could stop what is happening on Manus, yet chooses not to

the EU did consider drone program to monitor the Med sea but they abandoned it, because it would be too costly and won’t help stopping illegal immigrants since there is no way to tell whether the boats carry illegal immigrants or refugees who can enter legally by law.

Well sure it can “touch down briefly in Darwin to refuel”. But if you are tasking them to the north and west then thats a lot of commuting to get them to work. Perhaps its got more to do with where the RAAF personnel driving and servicing the drones prefer to live ?

“The drones are coming — to Adelaide.”

That’s odd. They’ve been ensconced in Canberra since 1927.

Just thinking of the carbon footprint from flying half a dozen 737’s around in circles all day & having to get them from Adelaide to Darwin.

This should at least put an end to the influx of Tasmanian refugees attempting the hazardous crossing to Victor Harbour.