The race for the ABC staff elected director position is getting heated. And other media tidbits.

Peacock to ABC rivals: stop the “smears”. ABC journalist Matt Peacock has called for his rivals to refrain from personal attacks in the campaign for the prized position of ABC staff-elected director, saying he is the victim of a “smear” campaign. In an email to ABC staff earlier this week, emergency services broadcasting boss Ian Mannix said Peacock’s appointment would undermine the perceived independence of the staff-elected director because he had received the backing of the Community and Public Sector Union. Mannix wrote in the email:

“The union is a special interest group — like any other lobby group — and this endorsement means Matt will represent the interests of the CPSU at board, not necessarily yours. Why else would they endorse him? The appointment of representatives of special interest groups to boards is something many of us have criticised over the years.”

Mannix also criticised Peacock for conducting a listening tour of ABC offices during the campaign, writing:

“A candidate with a campaign manager who makes national tours of offices — and talks about making ‘demands’ of the board — will sit uncomfortably with many. It raises the prospect of union-funded campaigns in the future. Not all of us can afford such extravagant campaigning.”

“I know most of you — members or not — don’t want to be told how to think or vote by faceless union officials or a candidate’s high-profile mates … I don’t have the cash to fly around and meet you all — heck, I’m on air every day and those flights are expensive — but I can introduce you to a digital version of me if you click here.”

Peacock says he would not be anybody’s “puppet” on the board and he had not sought union endorsement for the position. He’s meeting with ABC staffers in his free time during a trip organised and funded by the Office of Asbestos Safety, which asked him to facilitate workshops on asbestos poisoning. “I have never attacked anyone, and I don’t think that’s what ABC staff want to hear,” Peacock told Crikey. “They have seen fit to smear me, and some of the things they’ve said have been over the top.” Mannix and Henschke declined to comment. — Matthew Knott

To Stalin or not to Stalin? While many were in uproar over The Daily Telegraph‘s comparison of Stephen Conroy to Uncle Joe, Gerard Henderson was pretty relaxed about it, taking an opportunity to tell a story about Arthur Calwell and censorship during World War II, when Hendo had only had his column for a few years. Thank god he didn’t go into a tizz about casual totalitarian comparisons like this bloke:

“Just before the 1996 election, the Liberal frontbencher Amanda Vanstone devoted an entire speech to equating Paul Keating with Goebbels. I spoke to Vanstone about this at the time but failed to convince her there was no causal relationship between a democratic politician and a regime propagandist …

“In July, writing in the Crikey newsletter, Guy Rundle attempted to equate News Corporation’s Rupert Murdoch with Stalin. Rundle assigned News personnel in Australia to the leading Bolsheviks of their day. John Hartigan was Lenin, Chris Mitchell was Bukharin and so on. Sure, Rundle is a part-time comedian. But there was a serious message to his historical vaudeville …

“Hyperbole has become a way of getting noticed in the never-ending news cycle. Exaggerated comments about the applicability of totalitarianism to contemporary democracies get a run because so little is known about the suffering of the victims of Hitler and Stalin.”

Who was this prig? Some bloke named Henderson, in 2009. I think he was in the Scullin government. His decades-long campaign of sucking up to the News Limited leadership from Fairfax continues. — Guy Rundle

Front page of the day. The headline on this Cyprus daily translates as “Solution without Troika [European Union]”, with citizens on the streets successfully rallying against the proposed levy on bank savings. 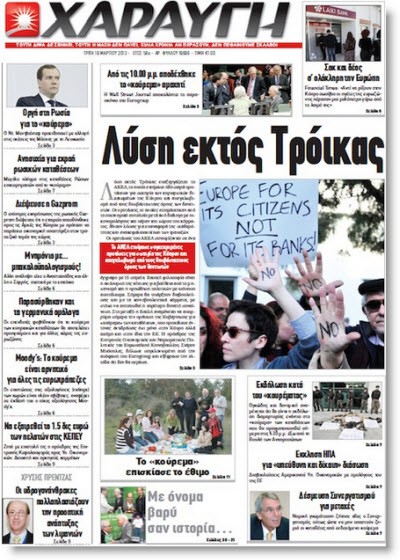 Dear Leslie, why isn’t my husband curious to know all about me?

Morrison’s Summer of Sophistry: the false industry demand about RATs

The road to reelection: can Morrison at least fake competence?

so Guy it’s okay for you to compare people to various despots, but not for the tele…seems fair