Cameron gets it done, keeping the press (mostly) on side

David Cameron has struck a compromise deal with political rivals for tougher media reforms in the UK. And he's managed to keep the press on side -- for the most part -- in the process. 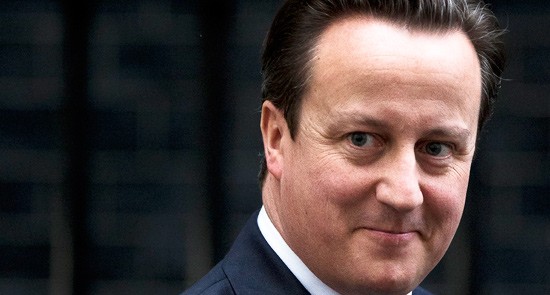 Labor is unlikely to succeed with its media reforms in Australia, but in Britain — racked by the ongoing fallout of the phone-hacking scandal — a deal has been done.

A new regime of media regulation was signed off by politicians overnight, creating a new body — a more powerful body — to oversee the British press. It followed days of negotiations between the major parties, during which Prime Minister David Cameron and the Tories faced a catastrophic loss at the hands of Labour and Liberal-Democrat forces.

The new and as-yet-unnamed body will have a number of explicit powers, chief among them the ability to “direct” newspapers and websites to publish lengthy apologies for incorrect stories. Newspapers and website organisations that don’t sign up to this new regulatory body will make themselves subject to exemplary damages, should they be successfully sued by complainants.

Part of the complex negotiations were occasioned by desperate Tory attempts to stave off the creation of a full statutory body. The compromise move was to authorise a “royal charter” setting up the new body at arms’ length from government. The deal has brought howls of protest from right-wing media owners — but they are on shaky ground, with fresh revelations of mass hacking at Rupert Murdoch’s Sun all through the Leveson inquiry. Indeed, News International is now beset with a “supergrass” informer, willing to name at least 800 new hacking victims.

The draft of the new charter — it includes a board independent of press organisations, a code of standards, an arbitration and complaints process, etc — has been derived from the recommendations of the final report from the Leveson inquiry, which Cameron had initially committed to support. His retreat from a fully supported regulatory authority prompted Labour to propose its own potential legislation, gaining Lib-Dem backing. Faced with defeat, the royal charter was a compromise.

So there’s now a proclamation by the monarch establishing a quasi-official body. Here is how the introduction to the document begins:

And on we go — press regulation, put on the same footing as the British East India Company, the Worshipful Company of Haberdashers, the Jockey Club and the Toc H. The move gets Cameron off the hook — just — although there has now been a debate as to how much “statutory underpinning” there will be to the charter itself. Cameron has already conceded a special law that would make it impossible for the charter to be revoked by ministers without a two-thirds vote of Parliament.

Thus, with a hands-off process, much of the discussion of the regulatory body’s specific form has been speculative — based on how much of the Leveson recommendations it will adopt and, crucially, what sort of settings it will apply on questions of privacy, fact, opinion and the like. Talk about your jockey clubs.

Cameron was worried about a parliamentary loss of course, but he was also concerned about a flank attack from “Hacked Off”, the now very powerful and cashed-up lobby group consisting of celebs who’ve been monstered by the tabloids. It’s a measure of what politics has come to that it’s neither industry nor unions in the smoke-filled rooms (incense, these days), but an organisation whose public face is Hugh Grant, and that can easily command far more public support and identification than any given politician.

Hacked Off is a professional politician’s worst nightmare since, behind its public celebs, is the treatment of ordinary people, crime victims who became fair game for the hackers. The Leveson inquiry and its subsequent recommendations were kicked off by the revelations News of the World journos had hacked into the phone of Milly Dowler, a teenager missing at the time, later found to have been murdered.

Still, Cameron got something out of the stoush, with most newspapers — including the Labour-leaning Mirror — portraying him as the valiant British lion standing for press freedom, etc, with some saying they would stay out of the system, even at the risk of incurring exemplary damages should a judgment go against them. Ironies abound in this story. Private Eye may well stay out, even though its day-to-day editor Francis Wheen was in favour of the Leveson inquiry. 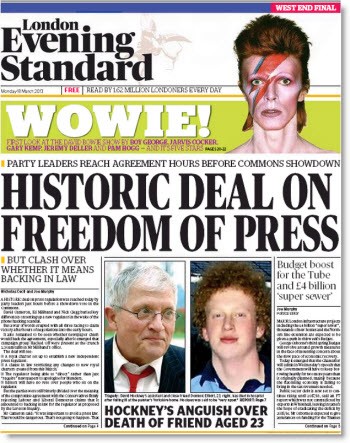 Most striking of all the news story that sparked the Leveson inquiry — Nick Davies’ and Amelia Hill’s Guardian report that NotW journos had wiped messages from Milly Dowler’s phone, thus giving hope she was alive — could itself have been the subject of a successful complaint to the new body, since it was not only unproven (the messages might have been wiped automatically) but readily checkable. The story prompted The Guardian‘s largest-ever self-correction notice — had this system been in place, a front-page correction might have been required.

But that’s the UK, where a viable but cut-throat surviving newspaper environment has tabloidised the entire press culture. News Corporation bears most of the blame for that — it took exceptional shady practices and turned them into standard procedure, creating a culture of nihilism in the process. The new revelations come from today’s case in which former Labour whip Siobhain McDonagh’s mobile phone was harvested for messages and numbers after it had been stolen and sold/passed on to The Sun. Four journos from the Mirror group have also been arrested on hacking charges. The hundreds of potential new hacking victims is the inevitable result of the process Murdoch put in place at News — cordoning off management and letting journalists fend for themselves. Indeed, so many journos have been arrested the UK is running out of specialist media solicitors to separately defend them all.

And of course through all this brouhaha, one fact remains: the whole process is premised on an industry model that is vanishing fast, one in which websites are add-ons to printed newspapers. The charter has a catch-all clause to get the websites too, but it has an unwarranted side-effect. In literal terms, any form of online publishing — including Twitter and other social media — would be covered by the new regulations. However, since it is voluntary to sign up, private tweeters, facebookers, bloggers, etc, won’t be covered, and no one would want them to be. But they may therefore be covered by the exemplary damages clause for non-compliers, even though no one wants them to comply.

What will that do to independent online publication? No one has a clue. Here ye, here ye, now know ye all, by the grace of God …

How many deaths of shame and cronulla rioting equal hacking a deal girls phone?

Indeed Gerry! I find it difficult to believe that Murdoch was responsible for all those activities but only in Britain? Why is that? It wouldn’t surprise me to learn of similar behaviours here. And as for Kim Williams behaviour, it’s not just a joke it’s a disgrace! Murdoch rags particularly the Telegraph’s dirty tactics re the PM and the Greens – to name just two (and there’s more, lots more) has nothing to do with freedom of speech or democracy. It’s to do with gutter politics.

Oh yes! Apparently the Legislation passed by the Conservatives in Britain goes much further than the Australian Govt’s proposals? Haven’t heard Abbott and Co complaining about how that Legislation inhibits freedom of the press etc? Abbott had nothing to say when the PM made that point during Question Time today!

Williams decribed the legislation as Unconstitutional. I looked at the Constitution I couldn’t find anything about the Freedom of the Press or even Freedom of Speech.