In Kenya, the rights and wrongs of a complex election play out

Kenya's president-elect is facing International Criminal Court charges of crimes against humanity. But he has a more immediate problem closer to home. United Nations consultant Robert Johnson reports from Nairobi. 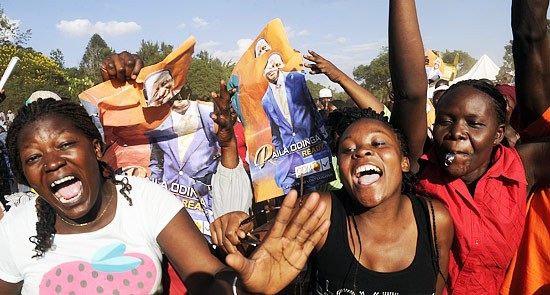 It’s been two fascinating weeks for political junkies since Kenyans went to the polls on March 4. Contrary to expectations raised in Crikey, there was a first-round victor — Vice-President Uhuru Kenyatta gained 50.07% of the vote for president. Or maybe not …

These were Kenya’s first national elections under the new (2010) constitution, and the first since the national elections of 2007, when more than 1300 Kenyans were killed in tribal/ethnic violence in the wake of the run-off elections. Two of the main candidates — Kenyatta and his last minute vice-presidential running mate (until then political foe) William Ruto — are wanted in the International Criminal Court to answer charges of crimes against humanity due to that early 2008 violence, and their cases are set to commence on, respectively, July 9 and May 28. They should be sworn into office by then. This is subject to post-election court appeals lodged with the Kenyan Supreme Court in the past few days.

Election day was largely peaceful, with the main problem the five-hour queues across much of the country. There were some violent incidents including killings, but the national media seemed to act together to not report situations that could fan reactions. The Independent Electoral and Boundaries Commission had one week to announce the outcomes (there were five other elections on March 4, in addition to that for president), and within days the evident failure of the expensive biometric and computerised electoral machinery became clear. The technology was incapable of vote-counting. By mid-week the IEBC had to undertake a manual count of the 12.3 million ballots.

It did so, and Kenyatta was declared president-elect more than 48 hours ahead of the constitutional deadline. His main rival, Prime Minister Raila Odinga, immediately cited irregularities and lodged an appeal in the Kenyan Supreme Court this past Saturday. The five grounds of appeal basically assert IEBC failures. The outcome will likely hinge upon Odinga’s ability to demonstrate tampering rather than incompetence, as well as any consequential material change in the outcome.

However, Kenyatta lodged his own appeal two days earlier. His apparent “pre-emptive strike” concerns whether invalid or informal votes should be counted in the total (as they have been) in calculating not only the national 50%-plus-one threshold but also the minimum 25% level of support to be won in a majority of the 47 seats. Without the rejected votes, Kenyatta’s majority rises to 50.51%, but if Odinga succeeds in having sufficient votes ruled invalid, he hopes that he could win a run-off election in which the people (he imagines) would thank him for taking them back to long, hot voting queues.

For now, the various parties are largely committed to following due process. However, these elections are about much more than showing that Kenya can avoid a repeat of 2007/08.

“That the ICC has now scheduled hearing dates is widely being treated as contempt for the popular will of Kenyans and their apparent desire to move on.”

Firstly, there are questions being raised about the role of the national media, which so diligently reported breaches and improprieties by the various sides in 2007. Now, there appears to be a collective media view that the national interest requires non-reporting of such violations, even of extreme violence and killings. Writing in The New York Times on Thursday, Michela Wrong — who understands the Kenyan political scene all too well — remarked:

“It sometimes feels as though a zombie army has taken up position where Kenya’s feisty media used to be, with local reporters going glaze-eyed through the motions … Lethargy should not be mistaken for laziness. Yes, rumors are swirling about payoffs and conflicts of interest. But this professional surrender, ironically, appears to stem from the very best of intentions.”

Secondly, while the whole of Africa watched in shock at the events in Kenya of 2007-08 — realising that if this could happen in Kenya, viewed as one of the most peaceful and stable countries on the continent, no African country was immune — Africans are now watching how Kenya will respond to the ICC charges. That the ICC has now scheduled hearing dates is widely being treated as contempt for the popular will of Kenyans and their apparent desire to move on.

Chinese diplomats were quick to meet with the president-elect. Botswana’s foreign minister’s post-election comment that President Kenyatta would be banned from entry if he didn’t co-operate with the ICC quickly led to an apology. How can African states — or any others — treat Kenyatta more harshly than Sudan’s President Omar al-Bashir (also wanted in the ICC) when Kenya recognises the ICC but — like the US — Sudan does not? Of course, they will find a way, given Kenya’s oil as well as its regional strategic importance.

At the same time, the African Union may finally get moving on its African Court of Justice and Human Rights, which would afford a means of stalemating the ICC by agreeing to hear the charges. (After all, charges were only referred to the ICC because of domestic inaction and the absence of a functioning African court.) For now, there is a lot of comment in Kenya, as well as many other African countries, about the ICC being a neo-colonial instrument.

Thirdly — and most importantly in the longer term — the key aspect of this month’s national elections was not so much the presidential contest as the inaugural elections of county governors under the current ambitious process of “devolution”. This is the core legacy of the new constitution and will have far-reaching consequences. Key among these is that Kenyans can now see first-hand that different tribal groups are taking on elected leadership roles. Future national elections may bring popular leaders emerging from county level.

The president-elect has also been reaching out to the various political/tribal groups, including — unsuccessfully so far — Odinga, whose political career is otherwise nearing its end.  Taken together, these at least augur well for Kenya’s future, but it remains clear that the country still has many challenges, from county through to international levels.