Mixing with the media moguls at the Senate hearing -- we miss Kerry Packer. Why the Brits are nailing media reform. Crikey seeks a date with Rupert. Enough media? We bring you the latest on rate cuts, carbon hero (and villain?) Michael Fraser and the corporatisation of universities. 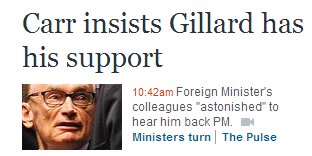 And The SMH has it on very, very good authority Labor figures were “astonished” to hear Carr back Julia Gillard. Why, the paper quotes its own reporter, Peter Hartcher, to provide the evidence — what more could you want?

What a curious little circle, where all roads lead to Hartcher.

Hartcher is a fine journo and he may be right on this one. But has leadership speculation really devolved to the stage of journalists quoting themselves (and precious little else)? It’s worth noting the ALP party room did not move against Gillard today. Perhaps we’ll give the last word to Carr; he described today’s SMH story as “speculation feeding on itself“.

was a fine journo……

Again those parts of the media whose existence, as they see it, is more important than the news?
Having to justify their existence will go to any ends to validate their prognostications strained through their own personal prejudices.
“Like a dog chasing it’s tale”?

Is the media’s job to report the news, or to be a player in making the news? It seems to me that the balance, in Australia, has tipped too far towards playing. Time for the media to grow up and try reporting for a while.

As Tony Windsor put it so well last night (Lateline) the media “inventing it (news)”.