A mere $995 to drink with Rupert ... senior ALP figure preparing to retire? ... too many egos at Telstra spin bunker ...

Murdoch, Bolt and a $995 bill. How’s this for a night out: the 70th anniversary dinner of the Institute of Public Affairs — “the voice for freedom since 1943” — with right-wing warrior Andrew Bolt as MC and none other than his boss, Rupert Murdoch, as special guest speaker. The swanky April 4 affair at Melbourne’s National Gallery of Victoria is invite-only — and then it’ll cost you $495 to be there (there’s a $50 discount for all you IPA members) … 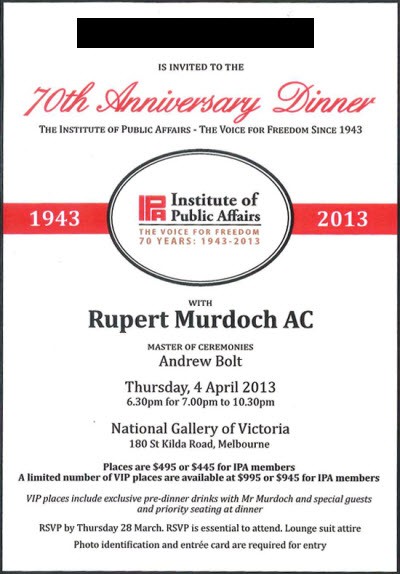 But if it were us — and sadly nobody at Crikey was invited; this invite fell off the back of the truck — we’d be digging deeper into the VIP package, which includes “exclusive pre-dinner drinks with Mr Murdoch and special guests and priority seating at dinner”. A drink with Rupert will only cost $995 — or the cost of a nice bottle of wine for the media mogul himself. Security seems a little tight — “photo identification and entrée card are required for entry” — so we don’t like our chances of getting in. But let us know if you’re going, won’t you — we’d love to know what goes down.

Conroy on the way out? Any truth to rumours flying about Canberra that federal Communications Minister Stephen Conroy’s media reforms are a last hurrah? Some think retirement before the election is likely … he’s not due to face the voters this year, as his term expires in 2017.

Healthcare giant in trouble. We heard this about a giant healthcare provider:

“X is almost insolvent. Look at the size of its debts which is almost the same as its value, dangerously low cash flow, the high interest it has to pay for the borrowing and the inability to repay the principal of its notes. The company is not making money. Unbelievable ASIC and ASX recently allowed the company to issue now subordinated notes. This company is the next ABC Learning Centres.”

We tried to contact the provider in question, but the only way to lodge a media request is via one of those annoying automated forms that come with an indecipherable security code. How about providing an email address, guys?

Telstra PR spinning faster. The massive Telstra media machine is whirring away at considerable speed and efficiency with a swag of new high-profile hires. They include Ingrid Just (former CHOICE spokesperson and ex-ABC TV and Radio), Mark Thompson (former bureau chief at Seven and Ten, with spinning experience in Defence, for Rio Tinto and WA Emergence Services) and Andrew Coombe (former news director at Seven and Ten and a South Australian Liberal flack). Is that too many egos in one place? According to our insider:

“Among a couple of existing hacks, they’ve managed to attract some heavy hitters despite the relatively junior nature of the roles which will be responsible for general day-to-day media management of regional outlets. Given the control wielded by chief spinner Nicole McKechnie, who has expanded her influence since joining the telco 18 months ago, we should wonder how many of these industry heavyweights — who themselves are formidable professionals — will last so far down the food chain at the telco. The jostling has already begun as responsibilities and lines of reporting are beginning to shake down and some are wondering if they were sold a pup.”

Memo: it’s really quite hot. “The Victorian government might be struggling to give nurses a pay rise,” writes one departmental mole, “but rest assured they do have the resources for more important matters. For example, to create and distribute to the medical community a three-page PDF informing recipients … that it’s hot.” Well, there was a bit more to it than that — but fair point.

Guess whose son just got his own podcast …