A Sunday Telegraph splash had the 32 “most trusted TV faces” apparently united in their “passion for news and current affairs” — as well as “concerns about the government’s controversial media reforms”. It was a follow-up to a similar feature for the 18 leading women in TV the paper ran in February. 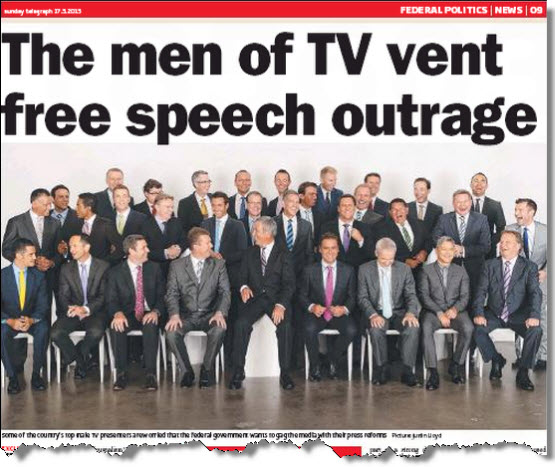 But when the newsmen posed they had no idea they’d be used to back the paper’s stance. It snared journos from the ABC and SBS — aghast at being associated with the anti-government line — and ignored journos who actually spoke in favour of reform and were critical of News’ treatment. The ABC’s Michael Rowlands took to The Drum today to reveal the extent of the stunt:

“The paper, planning to run the story on Sunday, approached the ABC and the other networks wanting some extra quotes from the presenters involved. Specifically it wanted to know our views on the Federal Government’s contentious media reforms.

“Fair enough. It had been one of the biggest stories of the week and the Telegraph was within its rights to seek the views of some of the country’s most prominent TV news figures.

“Our comments were sent off and we all thought nothing more of it. Then the bomb dropped on Sunday morning.

“There we were on page 9 laughing and joking in one of Justin Lloyd’s great photos but the headline above screamed: “The Men Of TV Vent Free Speech Outrage”.

“Readers could easily be forgiven for thinking we had, as the paper put it, ‘united to share their… concerns about the Government’s controversial media reforms.’

The online version has a caption that states simply “all concerned about media reforms”. But as Rowland records, two Network Ten journos featured are miffed. Hamish Macdonald said on Twitter the Tele “never asked for a quote and I never gave one”. And not surprisingly comments from Hugh Riminton — that the reforms “deserve a proper debate” and “some of the media reporting has been so over the top it becomes ridiculous and self-defeating” — weren’t run.

ABC 7.30 political editor Chris Uhlmann did criticise the timing of the legislation in the article:

“In 2006 Labor attacked the Howard Government for limiting debate on its media bills to three weeks. So how is it reasonable to set a one-week deadline on a bill that imposes government regulation of the press for the first time?”

And SBS reader Anton Enus was put forward as a dissenter of sorts:

“SBS World News Australia presenter Anton Enus said he believed freedom of speech was not under threat because, ultimately, ‘in a democracy like ours, the public would never stand for it’.”

But others at the ABC — including Joe O’Brien, Peter Wilkins and Jeremy Fernandez — and SBS journalist Ricardo Goncalves probably felt used when they opened their paper yesterday. If only they’d stuck to the fluffy spread on life as a famous newsman back on page 112 … 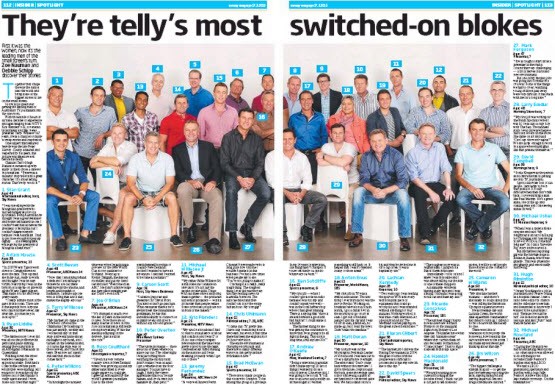 “In a Twitter exchange with me yesterday The Sunday Tele‘s editor, Mick Carroll, said Senator Conroy didn’t need to defend his media laws as he had the ABC to do that.

“No, Mick. Just like you, I believe in media freedom and free speech. I also, like my colleague Joe O’Brien (who was quoted), believe the media has a responsibility to report fairly and accurately.

Revamped Q&A brings the nation together (even the climate denialists)

Lets hope these so called “men of tv” vent some outrage at News Ltd on their respective programs. Somehow I doubt it though.

And where are the women journalists and ‘presenters’. Unbelievabel tripe and dribble from the Daily Terror. Thanks goodness Melbourne (where I live) only has to contend with the Hun and the Sunday Hun… Steven

Steven alls well…. it states in the article that this was a follow up to an earlier article that featured all women.. Michael’s Drum article refers to it also ..
But disgusting behaviour to these gentlemen in order to peddle their own dribble

That paper makes me feel sick in the stomach.

News Corp – for readers who don’t care if its true.