Student journalist Michelle Slater talks to Australian vet Dr Judith Mulholland, who has been working in Cairo, about the horses and cats that are the unseen victims of Egypt's political struggles. 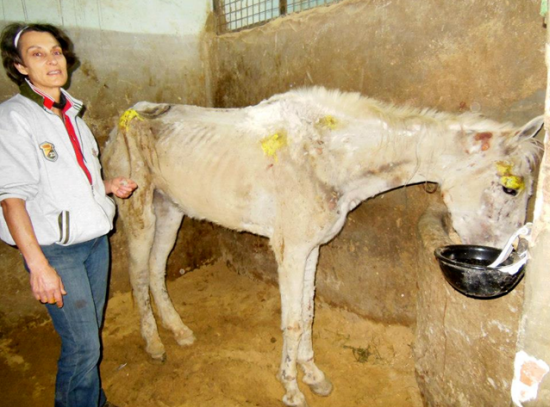 Civil unrest in Egypt is not only affecting its people — working horses, donkeys and camels are often neglected, badly injured or simply left to die.

Since the Arab Spring, tourism and foreign investment has shrunk, and the country is economically crippled. As a result, people cannot properly care for their animals. “In a lot of cases horses are simply starved to death,” said Australian vet Dr Judith Mulholland, who spoke to Crikey from Cairo.

Last year Mulholland taught Cairo’s vets and farriers how to treat crippled horses and donkeys. She has returned to the Egyptian capital this year to begin a de-s-xing program for the city’s feral cats, which she says are almost in plague proportions due to the city’s rundown infrastructure and rubbish piles. While she’s there, Mulholland is volunteering at a horse hospital and Society for the Protection of Animal Rights Egypt shelter.

“They feed [horses] such miniscule amounts of food, which leads to further problems like gastric ulcers,” she said. She saw donkeys with necrotic wounds from being harnessed for weeks on end.

Mulholland said the city has changed in the past year: “The people seem a little more on edge, and there is a noticeable level of depression. I can see that people are working hard to keep in front of their needs, and the pyramid tourist area has become markedly more dilapidated.”

The horse hospital, run by Norwegian woman Marte Kjoell, has gained worldwide attention through Facebook. Kjoell asked for expert help to present “solutions, not limitations and problems. We have enough of those.”

Kjoell said most Egyptians don’t keep pets, and some fear catching rabies: “Many times I have fed tiny kittens or a tail-wagging puppy in the street only to have women passing by screaming in fear, or warn me that the emaciated kitten will attack and hurt me.”

Egyptian-born Sherif Farag, hospital stable manager, says there are long-standing problems. “There were always problems regarding lack of knowledge about equine illnesses, wound care and leg injuries. There were also emaciated horses being worked, but not to the extent we have seen after the revolution,” he said.

Mulholland took nearly 90 kilograms of vet goods with her to Egypt — including euthanasia drugs. Last year, she was presented with hand-made firearms to shoot sick horses. “There’s not a hope in hell I’d pull the trigger on those in case they explode,” she said.

Kjoell says Farag does all the negotiations in the male-dominated city to protect her safety. She says Cairo was a safe place for women until the day Egyptian dictator Hosni Mubarak was overthrown in 2011. That same day, “a friend and I were mob-attacked and had to be rescued out by the army”. Now she never leaves the stables without a guardian. “Because I am so pale and white and clearly foreign, I get double the harassment of many others. If it wasn’t for the horses I would leave the country,” she said.

She hopes to have left systems in place to so animal carers can be self-reliant. She says they can now identify and successfully treat crippled horses. Two farriers she trained last year have now secured good jobs in the oil-rich Gulf countries.

‘They’re going to attack us’: Al Jazeera on the front lines of Egypt’s revolution