Kevin Rudd is likely to bide his time before making any kind of leadership challenge. Plus other political issues of the day.

If you think Kevin Rudd is a fool… Then he might be behind an attempt by federal Labor this week to get Julia Gillard to hand over the job of Prime Minister to him. But if you believe he is a clever and conniving politician who wants to be able to win an election he contests as party leader, then forget about the likelihood of any immediate change. Let the Gillard and Wayne Swan team stew in the embarrassment of their own budget deficit announcement in May before striking. The best chance of a Rudd-led victory would come from having only a short gap between his ascendancy and a polling day after July 1.

“I’ll call it now. The tap on the shoulder has finally come for Prime Minister Julia Gillard. She will be out of the job by Wednesday next and second-time-around Prime Minister Kevin Rudd will face one day of parliamentary sittings as leader before the long spring break. Roll on September 14 2013.”

I agree with the sentiment of that last sentence and will dip my lid to Bob if he proves to have called happenings in Canberra from his base in Darwin. But in the meantime he can share my Leadership Beat-Up title with that regular contender Peter van Onselen for this Weekend Australian effort: 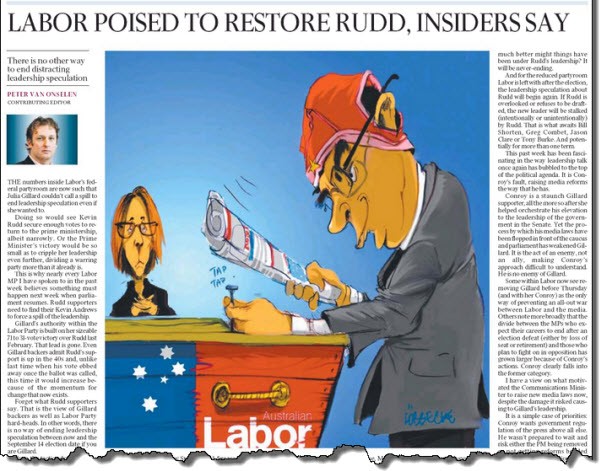 A market unmoved. The Crikey Election Indicator’s weekly guide to the state of play: 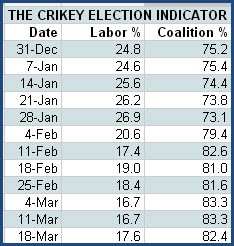 Frightening the horses. I am following what passes for debate about changes to media laws in a state of some confusion. I just can’t grasp why any change is necessary at all. I am unaware that anything is really different now than it was five, 10 or even 20 years ago, and we seem to have muddled along without democracy being threatened.

And I am a believer in “the thin edge of the wedge”. Governments over time have a habit of expanding the powers of organisations they create. Just look at the expansion in recent years of security and other law-and-order agencies. Forget about the author if you want, but this argument sure does give me pause for thought: 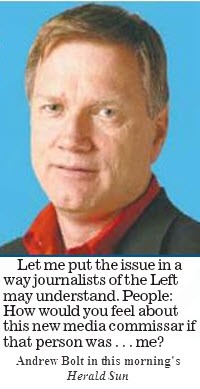 Beats kissing babies. This one was 11 and male! 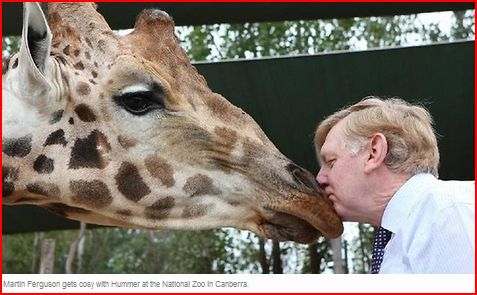 A quote for the day from The New York Times.

“In this country, the expectation is that every generation does better than the previous generation. This is no longer the case. This generation might have less.” 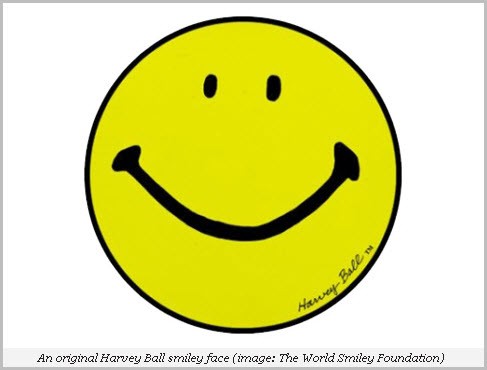 Delusion, dysfunction and the true history of Kevin Rudd

No doubt aided by the pathetic media snowjob, clearly Mr Farmer has not thought about the media reforms at all seriously.

“I am unaware that anything is really different now than it was five, 10 or even 20 years ago”

This is quite a shocking and shameful admission. Prior the hacking scandal and Finklestein, we had a situation where media companies did not publish codes of conduct, journalists did not read them and there were routine breaches. The then APC process was a joke – investigation was a little more than he-said she-said, and it was most often settled in favour of controlling publisher interests. If a verdict was unfavourable, many media titles, like The Australian, would simply withdraw to avoid the verdict. And even those who did not withdraw, simply skirted the remedy by burying the correction. Mr Flint was clearly an incompetent stooge and his collusion with the press barons ensured there was no funding for a more assertive role.

So much changed subsequently under the pressure of the hacking scandal, the threat of Finkelstein, and Mr Disney’s opportunistic initiative, that Mr Farmer must be asleep at the wheel not to notice.

We now have highly visible published Codes of Conduct, we have increased funding for the APC, and we have something passing for real adjudication and real corrections.

The purpose of the proposals is to lock in the changes to the self-regulatory model and prevent backsliding to the Flint-era regime that will inevitably happen once this comes off the media agenda.

Even a conservative appointee can’t do more than revoking the status of the whole APC, and of course, they’re never going to do that.

The main concrete consequence of the proposal is to prevent withdrawals from the APC to avoid facing a bad adjudication.

Given how Crikey is one of the few outlets to cover these issues properly, I don’t know how Mr Farmer does not know any of this…

I don’t think the Bolter would meet any of the criteria for media commissioner. His only qualification is being able to think of insults to sling and to be able to type. Surely even a Coalition Government would require more than this, unless you think Abbott and Bernardi would appoint some vicious, insecure parasite just because they could. Is the Coalition really at so low a level? I suppose that’s a rhetorical question.