Myanmar's president -- currently in Australia -- is driving a range of social, political and economic reforms in the former military dictatorship. But Rome wasn't built in a day, writes Victoria Bruce in Myanmar. 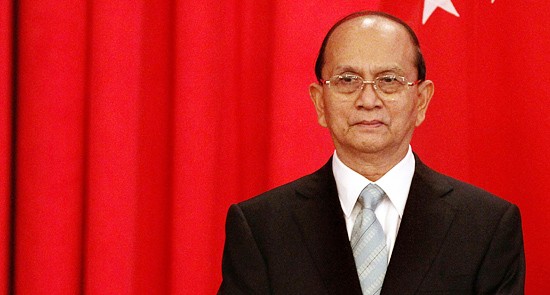 President Thein Sein is slowly transforming Myanmar from a military dictatorship to a fledgling democracy, but for millions of Burmese without basic services, how much have the reforms really helped?

Thein Sein is currently visiting Australia as part of a broader re-engagement strategy. The former military man has put his neck on the line to transform regime-ruled Myanmar, previously known as Burma, from an impoverished nation isolated by decades of punitive sanctions to a country that is rapidly opening up to the outside world.

Under Thein Sein’s administration, the government has freed hundreds of political prisoners, including released Nobel Peace Prize Laureate Aung San Suu Kyi from house arrest, embarked on peace deals with ethnic minority groups and relaxed media censorship. To promote post-sanction Myanmar’s re-engagement with the outside world, Sein has toured Europe and hosted US President Barack Obama, and his country is set to chair the Association of South-East Asian Nations in 2014.

Many in Myanmar’s business community agree change is in the air — but Rome wasn’t built in a day, and it’s a slow process transforming a 50-year old dictatorship into a vibrant capitalist democracy. As noted by chairman of Myanmar agricultural company Tropical Biotechnology, Ashok Murarka: “In a nation’s history 20 months is too short a period to notice real changes. So far we see only realignments of various views. These changes will be visible in a few more years.”

For William Aung, director at Yangon-based consultancy Thura Swiss, the most significant reforms to date include freedom of speech, relaxation of media censorship and the liberalisation of the economy. “Since the President took office there have been some economic reforms, such as allowing the formation of public companies, granting licence to private insurance companies and some privatisation of the military-controlled State Own Enterprises,” Aung said. “But the problem is the lack of skilled workers, adequate law and regulations to do the jobs. That is the major obstacle for Thein Sein’s administration.”

Thein Sein’s commitment to Myanmar’s reform process — and bringing military hardliners in the government along with him — demonstrates courage and leadership, says Eugene Quah, an Australian-born lawyer and one of the founders of the Australia-Myanmar Chamber of Commerce, who lives in the economic capital of Yangon. “He was handed a mess and has had to tread a very fine line to move the country forward after decades of stagnation while balancing so many different stakeholder interests [both domestic and international],” Quah said.

But for many of Myanmar’s 60 million-strong population, the impacts of Thein Sein’s reforms are yet to be experienced; three out of four are without reliable access to electricity, according to World Bank statistics, and mobile phone penetration is around 3%.

“Until now I haven’t seen any positive impact on rural/poor people,” Aung said. “Many people from village are still poor and leaving their villages to go Yangon or neighbouring countries to look for jobs and a better future.”

“… all Myanmar citizens need to participate and help continue the reform process for future generations.”

Last month rice farmer Bar Lue was given his marching orders by local township authorities because he lives and works in the vicinity of the 2400-hectare Thilawa Special Economic Zone (SEZ) mega-project, a multibillion-dollar industrial zone and port project spearheaded as a joint venture by the Japanese and Myanmar governments, touted as a solution to the country’s infrastructure shortage. If completed, it will be south-east Asia’s largest economic zone.

Jared Bissinger, an economist and PhD student from Australia’s Macquarie University who is studying Myanmar’s economy, notes land confiscations are a common occurrence in modern-day Myanmar and could pose a major problems in the future development of the country. As Myanmar opens up for business, care needs to be taken to mitigate further human rights violations and to include communities in future negotiations.

In urban Myanmar, change is more visible. Streets are clogged with new cars following relaxation of import licences and taxes, Western brands such as Coca-Cola and Pepsi are replacing local beverages, and firms including KPMG and the UK’s Standard Chartered Bank have offices in downtown Yangon. A Hilton hotel is tipped to open next year, a Novatel is being built at the edge of Yangon, and 91 telecoms companies have expressed interest in bidding for two mobile licences as the Myanmar government moves to liberalise its telecommunications sector.

Since the President took office and got the ball rolling on the reform process, a myriad punitive sanctions have been eased against Myanmar. Australia has rewarded the Thein Sein’s efforts by abolishing sanctions, stepping up its aid commitments and encouraging trade relationships. An Australia-Myanmar Chamber of Commerce has been founded, and Australian firms including mega energy firm Woodside Petroleum are preparing for their Myanmar play.

While the President’s three-day visit is tipped to focus more on government-to-government relations than engagement with Australia’s private sector, for Myanmar, having Australia onside as its geographically closest Western ally is an important part of building its ASEAN and Pacific alliances. But the ongoing ethnic conflicts in the northern Kachin and western Rakhine states remain a sore point  for the government, and it’s expected that human rights concerns will be on the agenda during his Australia visit.

While the President’s reforms are a step in the right direction, the actions of his party aren’t enough, says Aung. “Not only Thein Sein nor Daw Aung San Suu Kyi can change the country, but all Myanmar citizens need to participate and help continue the reform process for future generations,” he said.

*Victoria Bruce is the senior reporter at M-ZINE+, a Myanmar-based business magazine

Myanmar’s reform process is two steps forward, one back

Burma backgrounder: it is not a democracy (yet)

Crikey, is Victoria Bruce a “Freelance journalist in Myanmar” or a senior reporter at M-ZINE+, a Myanmar-based business magazine?

Can he be both, as you have indicated?

In my view the journalism that suggests on the one hand that “Burma is slowly moving towards democracy” but then immediately questions the “rate of the movement” is a sham. It creates a false dichotomy about what is really happening or happened in Burma.

It seems plain to me that some time ago American business realised that unless they did something about Burma it would be lost to Chinese industry. Meetings were hastily arranged between the US Embassy and the Burmese military. The Americans promised to make members of the junta fabulously and legitimately rich if they allocated resource and other concessions to American companies. The price of this deal would be some cosmetic changes to the human rights and democracy discourse in Burma, and a good international PR campaign.

Enter the international PR machine and the Victoria Bruces of this world to tell us that “President Thein Sein is slowly transforming Myanmar from a military dictatorship to a fledgling democracy, but for millions of Burmese without basic services, how much have the reforms really helped?”

The proper response to Bruce’s question is: Who gives a flying fig!

Neither Victoria Bruce nor the spin merchants give a fig about the millions of oppressed Burmese. Do they really expect international capitalism to give the Burmese peasantry human rights and democracy?

Of course western brands such as Coca-Cola and Pepsi are replacing local beverages, KPMG and the UK’s Standard Chartered Bank have offices in downtown Yangon, a Hilton hotel is tipped to open next year, a Novatel is being built at the edge of Yangon, and 91 telecoms companies have expressed interest in bidding for two mobile licences.

But tell me something I didn’t know.

Tell me the details of the meetings between US politicians and the junta, the dates, places, and who was involved. Tell me who from within the Burmese regime is going to become part of the next generation of Burmese multi-millionaire, and name the Americans (and Australians) making fortunes from it all.

And Crikey, do you have to publish this? Seriously, why did you give this article a guernsey – is there something you are not disclosing?

This article would be laughable if the Burmese Government’s state-sanctioned war against ethnic minorities in that country wasn’t so serious. Let’s start with the Kachin. Despite what President Thein Sein would have us believe, his government’s offensive against the Kachin Independence Army continues apace. On 11 March, more than a 100 trucks carry army reinforcements and heavy equipment were seen entering Kachin State from central Burma. The Chinese, who have invested heavily in Kachin State (jade, hydroelectricity, teak, minerals) and are unhappy about Naypidaw’s love-in with the West, recently allowed the Tatmadaw (Burmese Army) to detour and resupply in Chinese territory. Meanwhile in Shan State – which borders on Yunnan Province – the Chinese are also applying sticks, allowing the United Wa State Army (UWSA), Burma’s most powerful ethnic militia, to acquire large quantities of military hardware, including man-portable air defense systems (MANPADS) and, for the first time, Chinese-manufactured armored vehicles. None of these developments augur well for the Shan and Kachin people, who have suffered mightily at the hands of the Tatmadaw. And then there are the Rohingya.

Descendants of Arab merchants, seafarers and soldiers and who arrived during the colonial period, until the 1960s Burmese textbooks included the Rohingya as one of the nation’s ethnic groups. But in 1962 General Ne Win argued that the Rohingya were recognised by the democratic government he just overthrew “to get votes” and that because some Rohingya were descended from colonial-era immigrants, they failed to qualify as an official minority. The 1982 Citizenship Law enacted the official exclusion of the Rohingya, codifying a systematic campaign to force them to leave Burma. Since then, their lives have been utterly miserable. In last year’s communal violence between Rakhinese Buddhists and Rohingya, hundreds of Rohingya Muslims were killed, with nearly 115,000 displaced and thousands of their homes burnt. Many Rohingya who fled the violence have since perished at sea or disappeared. According to UNHCR, in 2012 nearly 13,000 Rohingya refugees attempted to leave Burma on smugglers’ boats. Of thes, at least 500 drowned.

Aung San Suu Kyi’s position re state-sanctioned violence against Burma’s ethnic minorities is that she has no position. The Lady, like Thein Sein, is a Burman. In other words, her interests are aligned to the dominant ethnic group. Don’t believe the tripe you read in the mainstream Western press – she is regarded with deep suspicion by the ethnic minorities. Meanwhile, western countries like Australia say nothing. After all, there is too much money to be made, isn’t there? Julia Gillard and Bob Carr should hang their heads in shame – it’s not as if they don’t know the truth about the charade that passes for democracy in Burma.
.