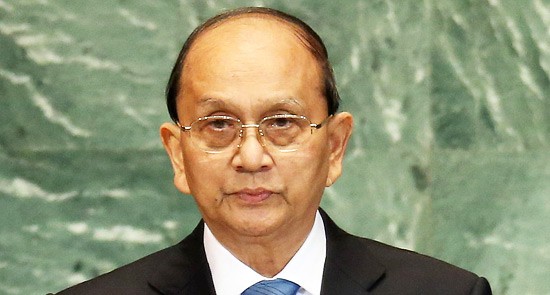 The four-day visit to Australia by Burmese President Thein Sein, the first by a Burmese leader since the country descended into self-imposed isolation in 1974, marks the increasing international acceptability of the once outcast state. Thein Sein’s arrival in Australia on Sunday reciprocates a visit by Foreign Minister Bob Carr to Myanmar (formerly Burma) last year.

Thein Sein’s visit to Australia reflects the quickening pace of deepening relations between Australia and Myanmar and Australia’s support for Myanmar’s reform process, including increased aid to more than $100 million over the next three years. Thein Sein met with US President Barack Obama last November, marking the beginning of a rapid thaw in Myanmar’s international relations and the ending of its international status as a pariah state.

Protesters in Australia have called on the Australian government to press the Burmese leader over continuing human rights concerns in Myanmar. These include continuing abuses by the military and police and two ethnic-based wars, in the northern Kachin State and Shan State. There has also been widespread international concern over attacks against ethnic Muslim Rohingyas in the western Rakhine State starting late last year, in which up to 2000 people are believed to have been killed and more than 80,000 displaced.

Thein Sein, a former general, was hand-picked for the presidency by hard-line predecessor General Than Shwe. Than Shwe is alleged to have committed war crimes and crimes against humanity, including directing the violent crackdown against protesters, led by Buddhist monks, in 2007. It has become increasingly apparent Than Shwe handed power to Thein Sein to slowly transition the country towards a form of democracy. The exchange for this political transition was that senior military leaders would be protected from prosecution and the often substantial business interests of their families would remain unaffected.

Since assuming the leadership in 2011, Thein Sein has released political prisoners, relaxed media censorship and allowed the pro-democratic National League for Democracy, headed by Nobel Laureate Aung San Suu Kyi, to compete in byelections, ahead of an open political competition in 2015.

The NLD recently held internal elections for candidates for the 2015 elections. Assuming the elections proceed without interference, it is widely expected the NLD will win a substantial majority. Thein Sein said last year he would be willing to hand over political power if the NLD achieved a parliamentary majority and Suu Kyi were elected president.

The Burmese leader’s visit to Australia coincides with the launch of the Australia Myanmar Institute in Melbourne today. The AMI, a project between Deakin and Melbourne universities, is intended to develop a greater flow of information between Australia and Myanmar and to promote Myanmar’s reform process.

*Professor Damien Kingsbury is director of Deakin University’s Centre for Citizenship, Development and Human Rights, and is a formation committee member of the Australia Myanmar Institute

Visiting Myanmar 8 years ago was striking in the lack of development and initially how restful on the eyes and soul that was after the bedlam of Bangkok- under the surface the populace was chafing at the cronyism and suppression but undeniably large elements of complex Burmese culture were intact. Free enterprise and markets and foreign investment will change all this- International Corporatism is the force that will slowly strangle this unique culture when transparently regulated Capitalism is the force that could create opportunity and wealth- Sadly this key distinction is also suppressed and one form of tyranny will be replaced by a less obvious but equally sinister other.

It seems plain to me that some time ago American industry realised that unless they did something about Burma it would be definitively lost to Chinese business. Meetings were hastily arranged between the US Embassy and the Burmese military.

American politicians promised to make members of the junta fabulously and legitimately rich if they allocated resource and other concessions to American companies. The price of this deal would be some cosmetic changes to the human rights and democracy discourse in Burma, and a good international PR campaign.

Enter the experts and the international PR machine to tell us there is a creative tension between the dictatorship and human rights, that “Burmese president Thein Sein is visiting Australia as tensions thaw between the West and Myanmar. But significant questions surrounding human rights remain”.

That would be some bas*ard child!

Professor Damien Kingsbury tells us that US aid is pouring into the country, that Bob Carr visited last year, and war criminals from the Burmese junta are visiting Canberra now. Arrest them, I say!

This is flotsam. I want to know about the deals and the corruption. Tell me the details of the meetings between US politicians and the junta, the dates, places, and who was involved. Tell me who from within the Burmese regime is going to become part of the next generation of Burmese multi-millionaire, and name the American (and Australian) companies and consultants salivating at the expectations of making fortunes from it all.

To inform me, follow the money, for heaven’s sake, and don’t mention human rights tensions.