The government's effort to exploit concerns about 457 visas appears to be landing on fertile ground, today's Essential Report finds. And concerns about the 457 scheme are spread across the political spectrum.

After a fortnight of debate on immigration following the Prime Minister’s western Sydney campaign, there is strong support for a crackdown on 457 visas, polling from Essential Research finds.

More than half — 58% — of voters support moves to reduce the number of foreign workers coming to Australia on 457 visas, Essential found, with 24% opposed. There was only minimal difference across voters: 64% of Labor voters support cutting back on 457 visas, and 58% of Liberal voters and 49% of Greens voters agree — despite the fact that the Greens are the strongest opponents of 457 visas.

While the government struggled to prosecute its case for curbing 457 visas, clearly there is strong community sentiment on the issue that Labor tacticians are seeking to tap into.

Labor’s primary vote has lifted a point to 35%, following its rise of two points last week, taking it back to 35%; the Coalition’s vote fell a point to 47%; the Greens remained steady on 9%, for a 2PP outcome of 54-46% in the Coalition’s favour.

Support for the NBN has also increased, despite publicity about roll-out delays. Seventy three per cent of voters support the NBN, up from 69% in November last year. However, support for the mining tax (the MRRT) has fallen in the wake of controversy over the level of revenue it is generating, with support down to 57% from 63%.

And there is once again more opposition than support for the government’s carbon pricing scheme, although the result (44% support it and 46% oppose it) is an exact reversal of the outcome in November.

But voters’ view that the Liberals will return to WorkChoices appears to have diminished a little since September, with 48% of voters believing it is likely the Coalition will restore WorkChoices compared to 28% who think it’s unlikely, down from September’s result of 51%-25%.

Essential also asked its semi-regular question on trust in major Australian institutions. The High Court, the ABC, the Reserve Bank and Federal Parliament all recorded substantial rises in trust, with the High Court trusted by 74% of voters, the ABC by 70% and the Reserve Bank trusted by 64%. The least trusted organisations are political parties (12%), trade unions (25%), business groups (26%), online news media (27%) and newspapers, TV news and state parliaments (30%).

Q: How much trust do you have in the following institutions and organisations? 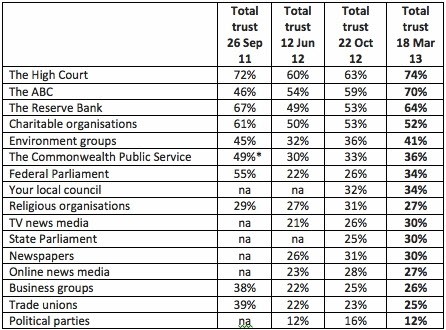 TONY Abbott wants to lift the limits on business and skilled migrants entering Australia, declaring that workers on skilled visas would become the “mainstay” of our immigration intake.
Defying union concerns and accusing the Gillard government of not having the best immigration policy for Australia, the Opposition Leader wants to lift the limits on 457 visas granted to skilled workers for temporary work for up to four years.

Mr Abbott says workers on 457 visas are “the best immigrants”, who contribute immediately to the economy and provide the best long-term workers when they convert their visas to permanent residency.

interesting research on 457s. another way to read the results is to say that 76% are not opposed but have differing views.