A magnum of pinot noir to celebrate an alleged dodgy deal: another day at ICAC. Remember when News Ltd backed media reform? Bernard Keane does. Oliver Yates' $10 billion green warchest. Your invite to dinner with Rupert Murdoch. And is Nathan Tinkler finally broke? 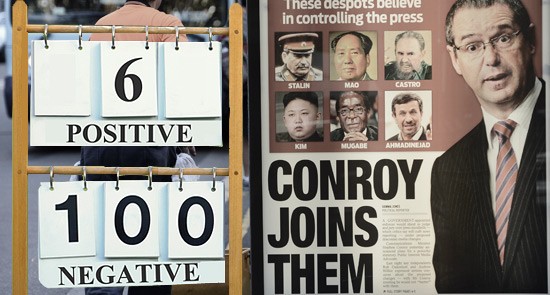 The Crikey scoreboard isn’t pretty. Think Hawthorn v Western Sydney; Australia v anyone else in cricket at the moment.

That’s our count of the number of positive articles — opinion columns plus our assessment of news pieces — compared with the ones toeing a concerted line across News Limited and Fairfax publications against government proposals for regulatory reform of the media.

Let’s be clear, this is flawed law — we’ve said so a bunch of times. But when the debate is this overwhelmingly one-sided, legitimate criticism is lost.

The government wants to toughen media standards to give the public what it deserves: fair and balanced journalism. Funny thing is, on this very issue, Australia’s media has proven it’s incapable of delivering it.

Jealously guarding their own form of censorship and free speech – being able to edit in or out that which they decide constitutes “the public interest” – which way did you expect them to marshall their forces and fall?

I’ve stopped reading Fairfax. At least it pretended balance a while back. (while the Australiar and its stable-mates prove a waste of space).
But now, you get stupid stories like this morning’s ‘Voters desert Gillard’ based on a poll which actually shows a slight improvement in the ALP standing, and shadowed by a Newspoll seemingly far more on the mark than its own predecessor. Thanks Gina.
Sure like anyone else I probably have a little bias – but all I can say now is “bring on the Guardian”.

The indignation of the MSM and their excessive ranting and skewing of this debate proves that reform is desperately needed.