Conroy sent to bus shelters? Did The Daily Telegraph take its fierce campaign against Labor’s media reforms to the streets? A Crikey reader in Sydney writes:

“On the same day The Daily Telegraph featured Stephen Conroy in company, and uniform, the advertising side of bus stop shelters in Sydney displayed the Telegraph front page. This was a very rapid response. Was it planned? Were there casual vacancies? Fortuitous? Done in the dead of night?”

Good questions. Either way, it worked well for them.

What the boats are costing you. A Crikey reader in Granville — that’s in the political battleground of western Sydney, naturally — found this in his letterbox recently: 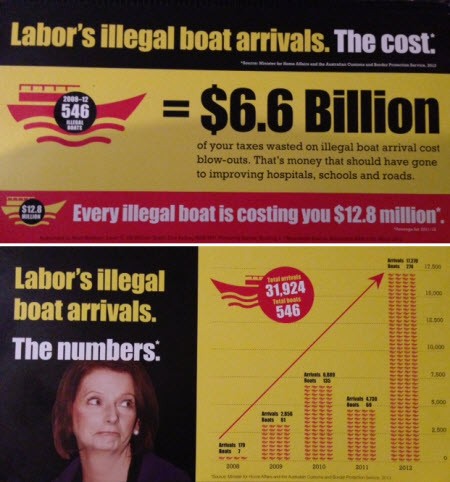 There’s no political branding to speak of — just the fine print that reads: “Authorised by Mark Neeham Level 12 100 William Street East Sydney New South Wales 2011.” Neeham is state director of the NSW Liberal Party. As for all those numbers — apparently sourced from “Minister for Home Affairs and the Australian Customs and Border Protection Service, 2013” — let’s just say they’re rubbery at best. Keep the pre-election propaganda coming. We want to know what’s showing up in your letterbox.

Roy Morgan pushes hard. “How’s this for a loaded question,” asks a Crikey reader who was being polled by Roy Morgan Research this week:

So the country is either heading in the “right direction” or the “seriously wrong” direction. Hardly apples and apples, is it?

Workplace weirdness: your stories. After the lolly ban at the CSIRO, as we riffed off yesterday, Crikey readers had their own examples of workplace weirdness. How about 18 years without windows?

“A new professor of surgery at a teaching hospital in Sydney where I worked for 36 years would not allow any windows whatsoever to be included in the new operating theatre block! It was hell for everyone working in there except the surgeon and the assistant. After 18 years of it, after I’d become the senior nurse manager, and planner for the next new block, I had windows included everywhere possible. We thought we’d died and gone to heaven.”

And then there’s the good reasons why the windows shouldn’t be opened — or ever built in the first place:

“You should ask the Commonwealth Department of Agriculture, Fisheries and Forestry about the giant fresh air ventilation ducts sited on either end of their building at 18 Marcus Clark Street in Canberra. A few years ago someone told me that these had never been opened as the risk of all that paper blowing out on to the street was just too high.”

Think of all the fishery scoops press gallery hacks would have had then. What’s going down in your workplace? Drop us a line — anonymity is, of course, guaranteed.

That flier :- the photo of Juliar looks like one that Limited News ewes to deride her?

Perhaps the Liberal Party should think again about the cost of freedom and the related issue of refugees and boat people.

How so? When I took a solo walk in the woods along the Kokoda Track as a raw uni student just out of law school, quite a few years back now, I learned some hard truths.

One was the shock of how young our soldiers were in the graves in the war cemetery in Lae. My age in fact or younger. Another was the mud, the heat, and the malaria carrying mosquitos.

I got to thinking – what were our diggers thinking and what was their sacrifice for? It was very humbling indeed. And this is what I concluded: They died in a fight for freedom for Australia and the world against fascism. And we supported the Refugee Convention out of that world war – presumably to deny fascist dictators ever having the last word again on tyranny.

It’s this kind of dedication to the cause of freedom that should make the two major parties think long and hard about supporting refugees. Because it honours our fallen soldiers.

And what about self interest? Dictators won’t stop at their borders given enough time. Far better to weaken them by taking our share of refugees out of their grasp.

Re the bus shelters: these are updated every morning regardless and are a new stunt released the same day as the change to SMH/AGE format from memory. Must be some very busy people at 2am every morning.

They have ruined my carefully constructed Limited News avoidance routine that I had put in place for my morning commute.